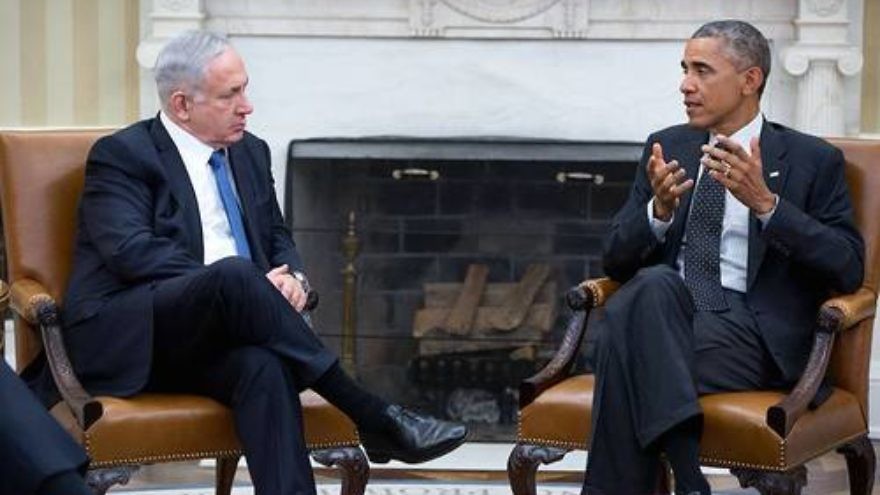 Obama, Netanyahu, Vice President Joe Biden, and other officials met for approximately two hours in the Oval Office to discuss the Israeli-Palestinian conflict, the negotiations over Iran’s nuclear program, and the American offensive against the Islamic State terrorist organization. Chief among Netanyahu’s concerns was the Iranian nuclear issue, against the backdrop of perceptions that the U.S. is diplomatically edging toward Iran in the effort to combat Islamic State.

On the same day, in response to the reported publication of a plan (already approved by the Jerusalem Municipality two years ago) to construct 2,500 residential units in Givat Hamatos, White House spokesman Josh Earnest said, “This development will only draw condemnation from the international community, distance Israel from even its closest allies, poison the atmosphere, not only with the Palestinians but also with the very Arab governments with which Prime Minister Netanyahu said he wanted to build relations.” Earnest also called the Israeli construction plan “provocative.”

U.S. State Department spokeswoman Jen Psaki issued a similar statement, saying that going ahead with the construction would “call into question Israel’s ultimate commitment to a peaceful negotiated settlement with the Palestinians.”

Netanyahu addressed the harsh U.S. criticism in an interview with NBC News. “I think [the Obama administration] should be acquainted with the facts first,” he said. “You know? First of all, these are not settlements. These are neighborhoods of Jerusalem. We have Arab neighborhoods and we have Jewish neighborhoods.”

Nathan Diament, the Orthodox Union’s executive director for public policy, said in a statement on Thursday that “suggesting that Jews residing in neighborhoods of Jerusalem—the historic capital of Israel and the Jewish people—is ‘provocative’ is offensive” as well as “fundamentally at odds with the notion that differences over Jerusalem are to be resolved in negotiations.” Earnest’s “implied threat that Jewish residence in Jerusalem will ‘distance Israel from even its closest allis’” represents “a resort to rhetoric which is entirely unacceptable,” added Diament.

The Givat Hamatos issue was not raised during the meeting between Obama and Netanyahu, the prime minister said. The two leaders made brief remarks to the press prior to their private meeting, but did not take questions. Obama reaffirmed the “unbreakable bond” between the U.S. and Israel, while acknowledging the new challenges Israel has faced since Netanyahu’s last visit to the White House this past March.

“Throughout the summer, obviously all of us were deeply concerned about the situation in Gaza,” Obama said. “I think the American people should be very proud of the contributions that we made to the Iron Dome program to protect the lives of Israelis at a time when rockets were pouring into Israel on a regular basis.”

The president also expressed empathy for the Palestinian residents of Gaza.

“I think we also recognize that we have to find ways to change the status quo so that both Israeli citizens are safe in their own homes and schoolchildren in their schools from the possibility of rocket fire, but also that we don’t have the tragedy of Palestinian children being killed as well,” said Obama. “And so we’ll discuss extensively both the situation of rebuilding Gaza but also how can we find a more sustainable peace between Israelis and Palestinians.”

Netanyahu thanked Obama for U.S. support for Israel’s security, specifically for assistance with the Iron Dome, including an additional $225 million in emergency funding to resupply the Jewish state’s stock of missiles for the missile defense system. The Iron Dome, said Netanyahu, “has saved so many lives, [and] saved many lives across the border.”

The prime minister expressed his support for America’s military actions against Islamic State, a group he equated with Hamas during his speech before the U.N. General Assembly earlier this week. The U.S. subsequently expressed its disagreement with Netanyahu’s comparison.

Yet Netanyahu was clearly more focused about speaking to the president about nuclear negotiations with Iran, which recently went into their final phase of negotiations before a Nov. 24 deadline for an agreement.

“Even more critical is our shared goal of preventing Iran from becoming a military nuclear power,” said Netanyahu. “As you know, Mr. President, Iran seeks a deal that would lift the tough sanctions that you’ve worked so hard to put in place, and leave it as a threshold nuclear power.  I fervently hope that under your leadership that would not happen.”

The question of how much nuclear capability Iran should be able to keep in a final agreement has been one of the main points of friction in the U.S.-Israel relationship as of late. Though U.S. State Department officials indicate that Iran would be able to keep some uranium enrichment capabilities for civilian applications as part of a final deal, Israel has argued that such an arrangement would be unacceptable and would allow Iran to revert to high enrichment capabilities for military purposes in mere weeks or months—threatening stability in the region.

America’s stated willingness to work with Iran to thwart the advance of Islamic State has also led to concern among Arab allies of the U.S.—such as Saudi Arabia, Egypt, and Jordan—about the Iranian regime’s hegemonic regional ambitions. Secretary of State John Kerry told Yahoo News in September that the U.S. is “open to discussions” with Iran about the Islamic State threat.

The aforementioned Arab countries have grown closer to Israel diplomatically and have held private meetings with Israeli officials.

“I think that there are opportunities,” Netanyahu said. “And the opportunities, as you just expressed, is something that is changing in the Middle East, because out of the new situation, there emerges a commonality of interests between Israel and leading Arab states. And I think that we should work very hard together to seize on those common interests and build a positive program to advance a more secure, more prosperous, and more peaceful Middle East.”

The meeting lasted longer than was previously scheduled, with Netanyahu leaving the White House at 1:26 p.m. EST, cutting into Obama’s previously scheduled 1 p.m. lunch with Biden. The prime minister left in a hurry, and did not respond to questions shouted by members of the press who were seeking to determine the reason behind the meeting’s unexpected extension.

—With reporting by Jacob Kamaras