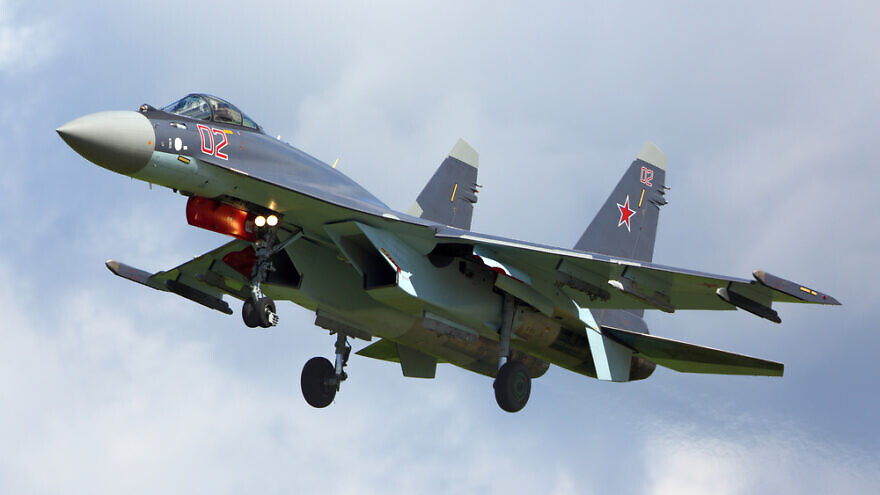 (December 20, 2022 / JNS) The potential future purchase by Iran of Russia’s Sukhoi Su-35 fighter jet would be a strong and troubling signal of a new level of defense cooperation between Tehran and Moscow, but it would not necessarily be a strategic game-changer for the Middle East or Israel’s security.

The arrival of such an aircraft could create new challenges for the ability of countries threatened by the Islamic Republic to detect and intercept them, but the Israel Air Force would likely be able to deal with such challenges effectively.

The Israel Defense Forces’ more immediate concerns remain the threat of swarms of unmanned aerial vehicles that adversaries, foremost among them Hezbollah, can unleash to challenge Israeli air defenses and strike critical targets, as well as the threat of mass projectile fire, particularly Hezbollah’s growing inventory of precision-guided missiles.

With a range of 3,600 kilometers (more than 2,200 miles), the Su-35, active in Russian service in the war against Ukraine, is a two-seat multi-role fighter designed to achieve air supremacy—though it is highly unlikely that it would provide Iran such a dramatic achievement in light of Israeli, American, Saudi and Emirati advanced air assets in the region.

It can carry a range of air-to-air and air-to-ground missiles and guided bombs, and is highly maneuverable.

It is safe to assume that the Israel Air Force will study the implications of the jet’s acquisition by Iran and make necessary preparations, including bearing in mind the need to prevent the jet from arriving in Syrian airspace. Israel has been busy rolling back Iranian entrenchment efforts on Syrian territory and has enjoyed near-total air supremacy in Syrian airspace. Israel combines that air superiority with intelligence capabilities and precise firepower to selectively pick off Iranian attempts to build a war machine in Syria.

On Dec. 9, NBC News cited Biden administration officials as warning that Russia is providing “unprecedented” military support for Iran in exchange for Tehran’s supply of Shahed-136 “suicide” UAVs, which Russia has used to target Ukrainian energy infrastructure and to terrorize Ukrainian cities.

“This partnership poses a threat not just to Ukraine but to Iran’s neighbors in the region,” a senior United States administration was quoted as saying.

“As part of the enhanced partnership, Russia may be providing Iran with advanced military equipment and components, including helicopters and air defense systems. In the spring, Iranian pilots trained in Russia to fly the Sukhoi Su-35, a Russian fighter jet, which the officials say indicates Iran ‘may begin receiving the aircraft within the next year,’ ” the report said.

Moscow is also seeking new levels of cooperation with Tehran on weapons development, including the possibility of joint manufacture of drones on Russian soil, making them more easily available to the Kremlin, according to the report.

Tal Beeri, head of the research department at the Alma Research and Education Center, an Israeli security research group, said that reports of the possible acquisition fit a clear pattern of new levels of Iranian-Russian cooperation.

“If until March 2021, prior to the Russian invasion, we saw Russia seeking to halt some Iranian activities in Syria, we now identify that since the Iranian delivery of unmanned aerial vehicles to Russia, their shared interests are getting closer,” Beeri said.

“The Iranians are much less restricted in Syria and the older competition over influence in Syria between Russia and Iran appears to be vanishing,” he added.

That competition has, in the past, taken the form of Russia seeking to counteract Iranian and Hezbollah attempts to establish a presence in Syrian military formations on the border with Israel, by creating a counter-force that trains the Syrian units.

“We can see that this effort is no longer there. Iran seems to be expanding its freedom of action in southern Syria,” said Beeri.

On Dec. 10, international media reports said Israel struck a military site in southern Syria’s Tel Khalib area, in a possible sign of this trend taking form, forcing Israel to target Iranian and Hezbollah positions in southern Syria. Leaflets were also dropped in the area warning Syrian troops against cooperating with the Iranian axis in the area.

Such a development should come as no surprise to those following the increasingly close Iranian-Russian cooperation.

In October, Iranian suicide UAVs were activated by Russia in significant numbers against electricity production targets and civilian areas on the Ukrainian home front. Russia also fired waves of cruise missiles during the month.

The Iranians have become a principal supplier of accurate firepower for the Russian war effort, due to Moscow’s struggle in producing enough of its own missiles and UAVs.

Russia has also used the Iranian-made Mohajer-6 on the Ukrainian battlefield, a UAV that can gather intelligence and launch guided missiles, with a range of 2,000 kilometers (1,240 miles).

Iran’s arms industry has developed no fewer than 50 types of UAVs, some of which, including the Shahed-136, have likely been smuggled to Hezbollah’s depots in Lebanon, according to assessments by the Alma Center.

According to media reports, Russia also intends to acquire Iranian ballistic missiles of the Fateh-110—already in Hezbollah possession in Lebanon—and Zolfaghar types.