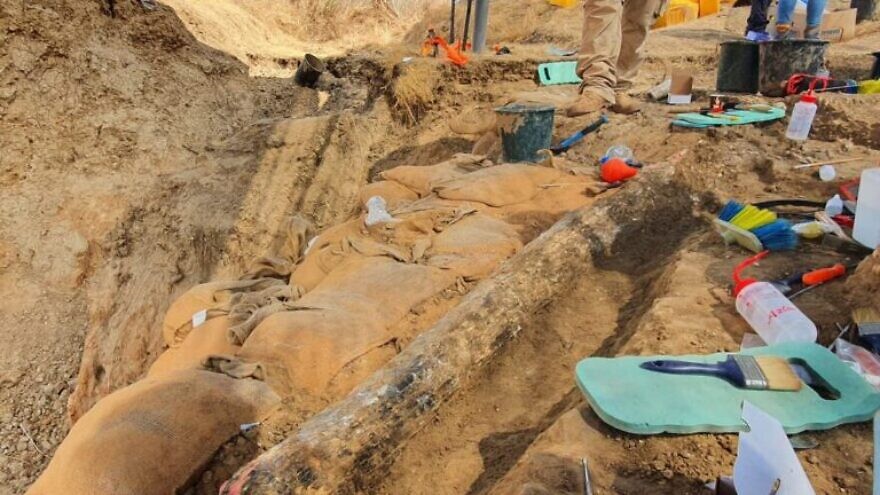 (September 1, 2022 / Israel21c) A well-preserved 500,000-year-old fossil elephant tusk has been discovered near a kibbutz in the south of Israel.

It took experts from the Israel Antiquities Authority, Tel Aviv University and Ben-Gurion University of the Negev two weeks to excavate the complete 2.5-meter-long tusk, which belonged to a straight-tusked elephant (Palaeoloxodon antiquus), in the appropriately named “Operation Elephant.”

The discovery, near Kibbutz Revadim, sheds new light on prehistoric life in Israel, where gigantic elephants roamed and grazed the coastal plain alongside other large mammals such as cattle, hippopotami, deer, boars and horses.

The fossil was spotted by chance by Dr. Eitan Mor, a biologist from Jerusalem, who visited the area after reading about prehistoric elephants. 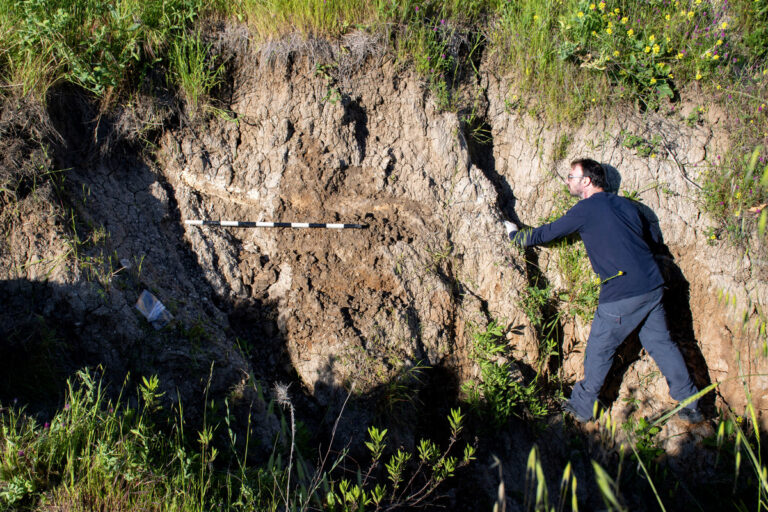 The fossil was spotted sticking out of the ground near Kibbutz Revadim. Photo by Yoli Schwartz, Israel Antiquities Authority.

“To my surprise, I spotted something that looked like a large animal bone peeping out of the ground,” he said. “When I looked closer, I realized that it was the real thing, so I rushed to report it to the Israel Antiquities Authority.”

According to IAA prehistorian Avi Levy, the director of the excavation, this is the largest complete fossil tusk ever found at a prehistoric site in Israel or the Near East.

“From our previous archaeological excavations at Revadim, we knew that the site was settled in the Late Lower Paleolithic period, as stone and flint tools, as well as animal bone, remains (including of elephants) were retrieved, but finding this half-a-million-year-old complete elephant tusk in such a good condition is something else,” he said.

Extracting the tusk from the site sediments was a challenge for the experts.

“The fossilized tusk is extremely fragile, and it is likely to disintegrate when exposed to the air and sunlight, and to human touch,” explained professor Israel Hershkovitz from the Dan David Center for Human Evolution and Biohistory at Tel Aviv University. 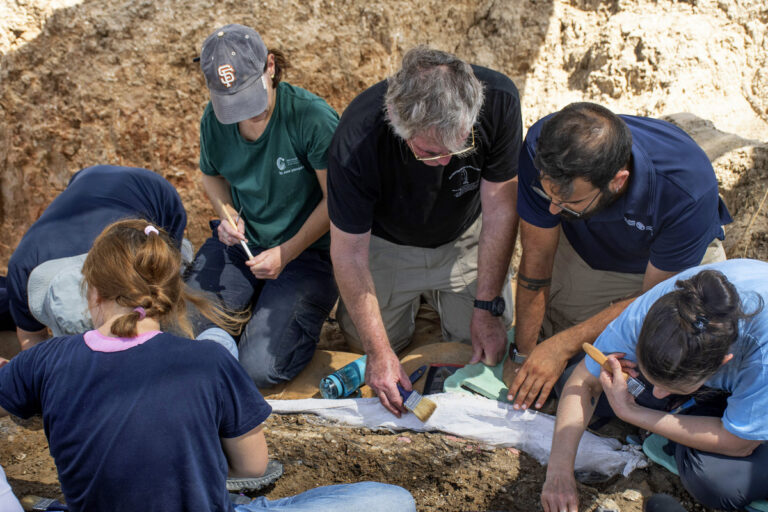 Straight-tusked elephant remains have only been found in a few areas, said IAA Archaeozoologist Lee Perry-Gal.

Questions remain about the Revadim find, as the tusk was detached from the skull and the rest of the body, suggesting it might have had social or spiritual significance for the population at the time.

Elephants at this time were routinely hunted, but academics are still debating whether they were hunted for food or for special occasions.

Hunted for food or for spiritual reasons? Experts will be examining the tusk closely for information. Photo by Yoli Schwartz, Israel Antiquities Authority.

“We anticipate that the discovery of the new tusk in a clear archaeological context will shed light on this issue,” said Professor Israel Hershkovitz from the Dan David Center at Tel Aviv University.

The tusk is now being studied and conserved and once the work is complete the IAA plans to exhibit it to the public at an exhibition hall on the National Campus for the Archaeology of Israel in Jerusalem.