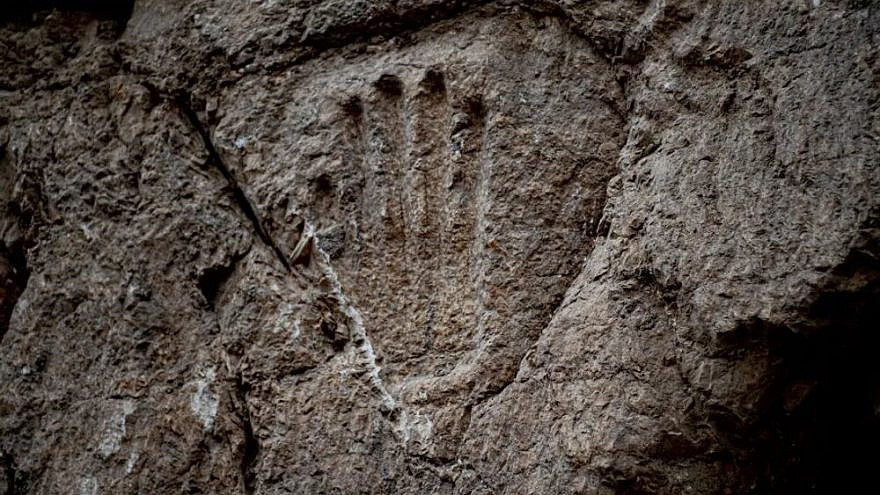 (January 25, 2023 / JNS) A mysterious hand imprint carved into a thousand-year-old rock-hewn moat that was part of the ancient fortifications of Jerusalem has been uncovered next to the Old City’s northern wall, the Israel Antiquities Authority announced on Wednesday.

The discovery, which is part of a defensive moat that surrounds the city walls and is likely to date to the 10th century CE or earlier, was made along Sultan Suleiman Street ahead of planned city infrastructure work, the state-run archaeological body said.

The bustling eastern Jerusalem street is built directly over the huge moat measuring at least 10 meters (33 feet) wide and 2-7 (6.5-23 feet) meters deep, whose function was to prevent an enemy besieging Jerusalem from approaching the walls and breaking into the city, said Zubair Adawi, the excavation’s director.

He noted that moats, particularly in Europe, are usually filled with water but the one in Jerusalem was dry.

The impressive walls and gates of the Old City were built in the 16th century at the direction of Sultan Suleiman the Magnificent of the Ottoman  Empire.

“The earlier fortification walls that surrounded the ancient city of Jerusalem were much stronger,” said Dr. Amir Re’em, Jerusalem regional director at the Israel Antiquities Authority. “In the era of knights’ battles, swords, arrows and charging cavalry, the fortifications of Jerusalem were formidable and complex, comprising walls and elements to hold off large armies storming the city.”

Armies trying to capture the city in the Middle Ages had to cross the moat and behind it, two fortifications walls—equipped with previously uncovered secret tunnels—while the defenders on the walls rained down on them fire and sulfur, he added.

Historians who accompanied the First Crusade recount how it took the Crusaders five weeks in the summer of 1099 to cross the moat under heavy fire from Muslim and Jewish defenders, Re’em said.

In the course of the excavation, the enigmatic hand imprint was found carved into the moat wall. Archaeologists have not yet deciphered its meaning and are examining whether it was symbolic, points to something or was simply a prank.

“Many dreamed about and fought for Jerusalem, and the city fortifications are a silent testimony” to this, said IAA director Eli Escuzido. “The archaeological finds enable us to visualize the dramatic events and the upheavals that the city underwent.”

The Antiquities Authority hopes to make the site accessible to the public.