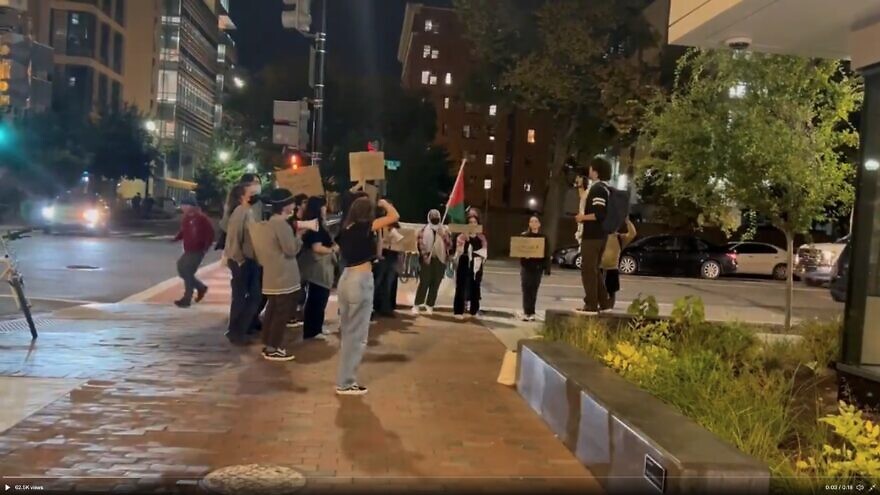 Members of the George Washington University’s Students for Justice for Palestine and Jewish Voice for Peace protest outside the university’s Hillel building calling for an “Intifada” against Israel on Oct. 11. Source: Twitter.
Republish this article
610 WORDS
Spread the word.
Help JNS grow!
Share now:

(October 14, 2022 / JNS) Two anti-Israel groups held a protest calling for a violent uprising against the State of Israel at George Washington University in Washington, D.C., on Tuesday.

According to a video released on social media, about 15 to 20 members of GWU’s Students for Justice in Palestine and Jewish Voice for Peace chapters stood outside of the GW Hillel chanting, “There is only one solution: intifada revolution.”

Intifada, translated as uprising or rebellion in Arabic, refers to two extended Palestinian waves of terrorism—the first from 1987 to 1993 and the second from 2000 to 2005.

According to GW SJP’s Facebook page, the protests came in response to pro-Israel student groups including the GW Mishelanu (an Israeli-American Council affiliate) and GW for Israel hosting a talk by Doron Tenne, assistant director of the Israel Security Agency and its attaché to the Embassy of Israel in Washington. SJP noted that Tenne held leadership roles in the Israel Defense Forces during the first intifada.

“Inviting a man who has directly overseen and commanded the mass slaughter of Palestinians and the continued land theft and hyper-militarization of our homeland—in the most explicit of terms—says that these organizations wholeheartedly support the actions of someone who could only be described as a war criminal,” GW SJP said in a statement.

According to a statement from GW Hillel, students who were in the building for the event, studying or participating in a student leadership meeting, were shouted at by the protestors, who called them “war criminals” and had signs saying “GW Hillel, you have blood on your hands.”

“We celebrate the rights of all to exercise free speech. However, when this exercise limits the ability of our Jewish students to freely learn, when property is vandalized, or when our home cannot be fully utilized as a result of aggressive behavior and actions, a line has been crossed,” the Jewish organization said.

“Zionism is not a dirty word, it is simply the belief that the Jewish state has the right to exist,” the group continued. “To direct vile speech around Zionists towards the Hillel building and our community does nothing to advance the cause of peace or the work of changemaking.”

Noted Jewish political columnist and GW alumnus Jeff Jacoby reacted to a video of the protest on Twitter.

“At GW, my alma mater, protesters chant their support for an ‘intifada’—i.e., killing of Jews through terrorism. Since the protesters hate Israel, they hate Jews,” Jacoby wrote. “Everyone should understand: In 2022, there is no meaningful difference between anti-Zionism and anti-Semitism.”

Gil Preuss, CEO of The Jewish Federation of Greater Washington, said in a statement last week that he was appalled by the anti-Semitic flyers.

“This hateful language is extremely harmful for GW’s Jewish students and the Jewish community at large, particularly on the heels of Yom Kippur and the upcoming holiday of Sukkot,” he wrote.

GW President Mark Wrighton and other administrators condemned both incidents in two statements, one after the flyer incident and another after the protest, strongly condemning “anti-Semitism and hatred, discrimination, and bias in all forms.”

“Each of us is pained by the harm caused by recent acts that appeared targeted to members of our community based on their Jewish faith or their affiliation with Hillel,” Wrighton wrote. “Honoring our commitments to diversity, inclusion, free expression, and community is a delicate and difficult balancing act, and this aspiration has never been more critically important.”