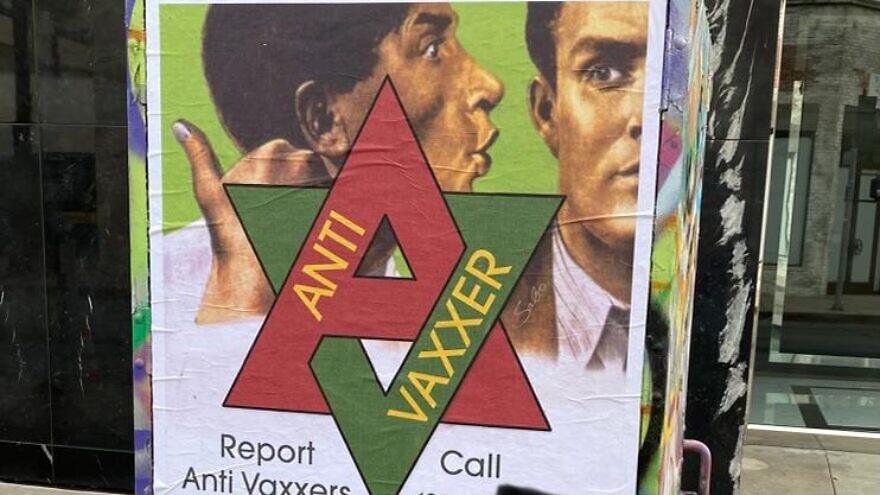 Anti-vaccine posters that featured a Star of David on them were discovered in at least two Los Angeles-area this past wee. Credit: Magen Am.
Spread the word.
Help JNS grow!
Share now:

(December 23, 2021 / JNS) Anti-vaccine posters that featured a Star of David on them were discovered in at least two Los Angeles-area locations this week, including pasted to an electrical box outside a synagogue.

The first was found outside the Baba Sale Congregation and showed the letters “A” and “V” overlapping to form a Star of David. The same poster was found in front of a building affiliated with Cedar-Sinai Medical Center. Both fliers said, “Report Anti-Vaxxers, because you care and they don’t,” and included a telephone number that, according to a local media outlet, went to a restaurant in Hollywood.

The Baba Sale synagogue is no stranger to hateful messages; in 2019, vandals spray-painted “Free Palestine” on the building’s exterior.

Magen Am—a nonprofit, armed security patrol in the heavily Jewish Los Angeles neighborhoods made up of former Israel Defense Forces and U.S. military veterans—has been in touch with the local police and has moved around its patrol to “cover additional daytime hours, as much of this has been happening in broad daylight,” according to Leibel Mangel, the group’s executive director.

The anti-vax posters were the most-recent incident of anti-Jew hatred tied to COVID-19. Just this weekend, people in nearby Beverly Hills and Pasadena found fliers on their front yards from the virulently anti-Semitic Goyim Defense League, that claimed Jews are responsible for or profiting from the pandemic. They were among hundreds of people in eight states across the country who also received those hate-filled fliers.

It was the second time in as many months that such fliers were left in Beverly Hills, which is “one of the only Jewish-majority cities outside of Israel,” according to local officials.

In a release, the local police and city council members said “these cowardly acts and any divisive attempts of intimidation will be rejected outright…. the City condemns this unwarranted hate speech that has been unsuccessfully used to disparage a community that has, and always will, stand strong together and fight hatred of any kind.

“Senseless acts like this have no home here and will never be accepted. Our community is home to families of survivors of the Holocaust who have seen evil and will never give in to such attacks,” the release went on to say.