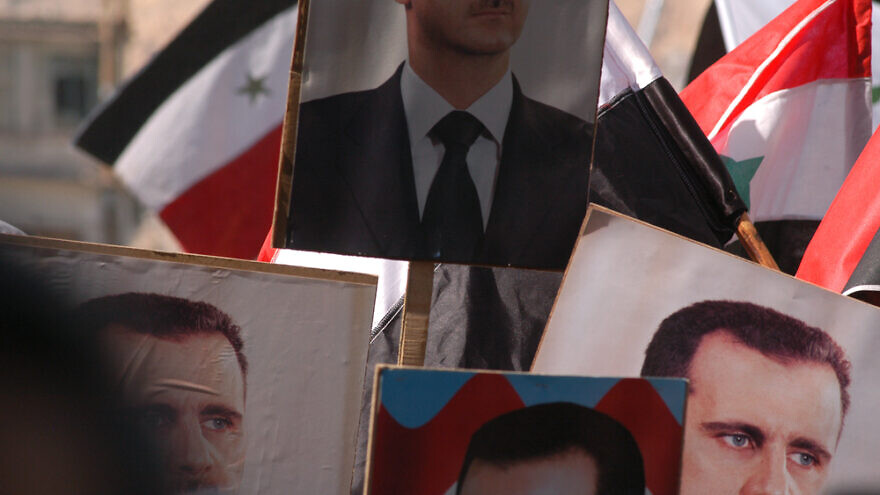 (April 12, 2022 / JNS) Despite the enormous atrocities it has committed since the outbreak of the 2011 Syrian civil war, the Assad regime is slowly but steadily returning to somewhat of an embrace in sections of the Arab world, in part due to an attempt by Sunni countries to drive a wedge between Damascus and Tehran, according to Israeli observers.

On March 18, Syrian President Basher Assad conducted his first visit to the United Arab Emirates since 2011.

Professor Eyal Zisser, a lecturer in the Middle East History Department at Tel Aviv University, described the campaign by Damascus to regain regional Arab legitimacy as “a continuous process, marked by rises and falls, but the direction is clear: a return by Syria to the embrace of the Arab world.”

The states leading this process, he said, are the ones that had never cut off ties with Syria in the first place and maintained open channels of communications with it during the war, mainly Oman and the UAE.

“From the perspective of the Emiratis, they are not only giving but also receiving. Assad never attacked the Abraham Accords, and actually gave them approval when he visited the UAE soon after Israeli President Isaac Herzog did,” argued Zisser.

“But this is a slow process since Saudi Arabia and Qatar are still hesitating or are expressing doubts, and Egypt will not proceed alone without Saudi Arabia,” he stated.

Professor Benny Miller, an expert on international relations from the School of Political Sciences at the University of Haifa, said “in the framework of their competition with Iran on the dominance of the Middle East, the Sunni Arab states aim to weaken the Iranian influence in Syria. Thus, we can interpret the visit in this framework.”

Assad, for his part, aims to promote his legitimacy, noted Miller.

“Another consideration of the Arab states is the expected growing U.S. disengagement from the region,” he said. “Hence, on the one hand, the Arab states care less about United States opposition to rapprochement with Assad with his major war crimes, while on the other hand, they aspire to reduce the areas of conflict in which they are engaged in the region beyond Yemen and its supporter: Iran.”

Miller stated that “somewhat similar logic”—the attempt to decrease areas of conflict—“is behind the warming relations [between Arab Sunni states] with Turkey.”

‘Find a contra to Qatar’

Meanwhile, Iran has attempted to put a positive spin on the visit.

In a report for the Meir Amit Intelligence and Terrorism Information Center, Raz Zimmt, a senior Israeli Iran expert, noted that the Iranian website Nour News, which is affiliated with the Iranian Supreme National Security Council, “responded positively to the visit of the Syrian President, Bashar al-Assad, to the UAE.”

The website presented the visit as a “manifestation and proof of Iran’s successful regional policy,” said the report. “A commentary published on the website on March 20 addressed the change that occurred in the position of the UAE toward the Assad regime after years of what the website described as a policy of backing the Syrian opposition and demanding the fall of the Assad regime. … According to the website, this change is the result of Iran’s unyielding support for Syria, and the recognition of the countries of the region that they cannot rely on the United States and Israel.”

The Iranian site attempted to claim that the change in the UAE’s position and its willingness to normalize ties with Syria “indicate that it had no choice but to abandon its previous policy, which was based on running proxy organizations in Syria and using its oil wealth. The commentary assessed that in Yemen, too, the ‘aggressor states’ will have to forego their hegemonic policy and conduct negotiations with the real representatives of the Yemeni people [meaning, the Houthis].”

This Iranian rhetoric is unlikely to impress the UAE, which recently came under deadly Houthi missile and unmanned aerial vehicle attack, or its senior Gulf partner, Saudi Arabia.

According to Zisser, “the UAE is not only going to Syria to stop Iran but also to find a contra to Qatar.”

“This then is a process, but it is slow,” said Zisser. “And in any case, the key does not appear to be there, but rather, in Assad’s ability to maintain sovereignty in Syria and stabilize the situation [in Syria itself]—something he is struggling to do.”