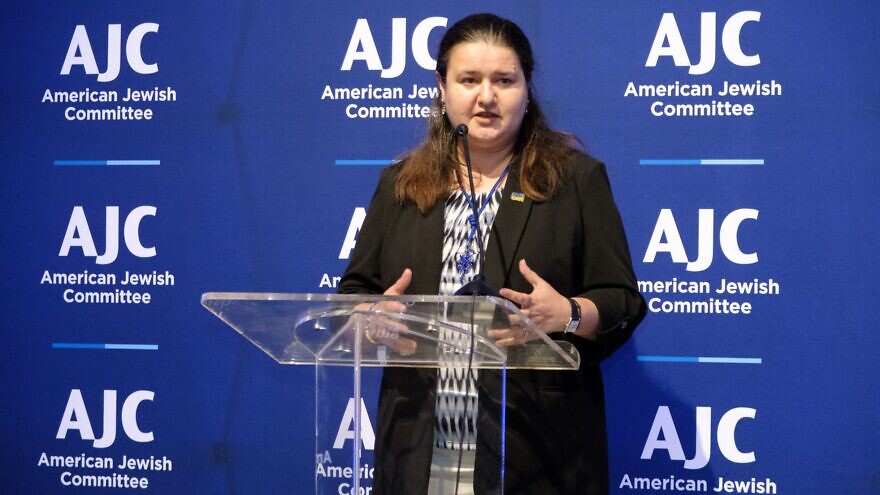 (May 25, 2022 / JNS) Ukraine’s ambassador to the United States was recognized on Tuesday as the American Jewish Committee brought back its annual tradition of hosting a diplomatic seder in Washington, D.C.

The event featured a dinner, modeled as a mock Passover seder, which allowed the representatives of nearly 50 countries in attendance an opportunity to connect and talk about the histories of their nations and their relationship to the Jewish community.

Rabbi Aaron Alexander, co-senior rabbi at Addas Israel, a Conservative synagogue in Washington, D.C., and the earliest speaker at the dinner, explained that the Passover story of degradation to emancipation plays itself out over and over around the world and in different cultures.

Throughout the dinner, the approximately 250 guests were invited to participate in various discussions on topics such as how and at what price their nations achieved freedom, led by leaders at each table and AJC Washington board members Adrianne Malasky and Adam Munitz.

The guests included ambassadors, embassy and consulate staff; U.S. government officials; and AJC staff and volunteers. This year marked the first time the event was held since 2019.

Jason Isaacson, AJC’s chief policy and political affairs officer, recalled the first AJC Diplomatic seder in a conference room of AJC’s office and remarked how much it has grown into a tradition.

“In the course of the year, my colleagues and I have many opportunities to interact with the diplomatic community, in your capitals, ambassadors in ours and your U.S. consulates, your U.N. missions. We come to you periodically with our concerns or observations, our appeals,” said Isaacson. “On this night that we regard as different from all other nights, we try to interact in a different way and tell you a little about ourselves, our people’s history, our first principles.”

Isaacson said that this year’s Passover, officially observed in April, came at a time of peril, where the Jewish community watched in horror the war crimes being committed in Ukraine by Russia in what he called an “unprovoked invasion of Ukraine,” as well as the violence in Jerusalem and terrorist attacks in Israel.

But, he said, there was also hope over the “new flowering of outreach and cooperation between Israel and the Arab states,” to which the AJC has contributed to over the past decades. 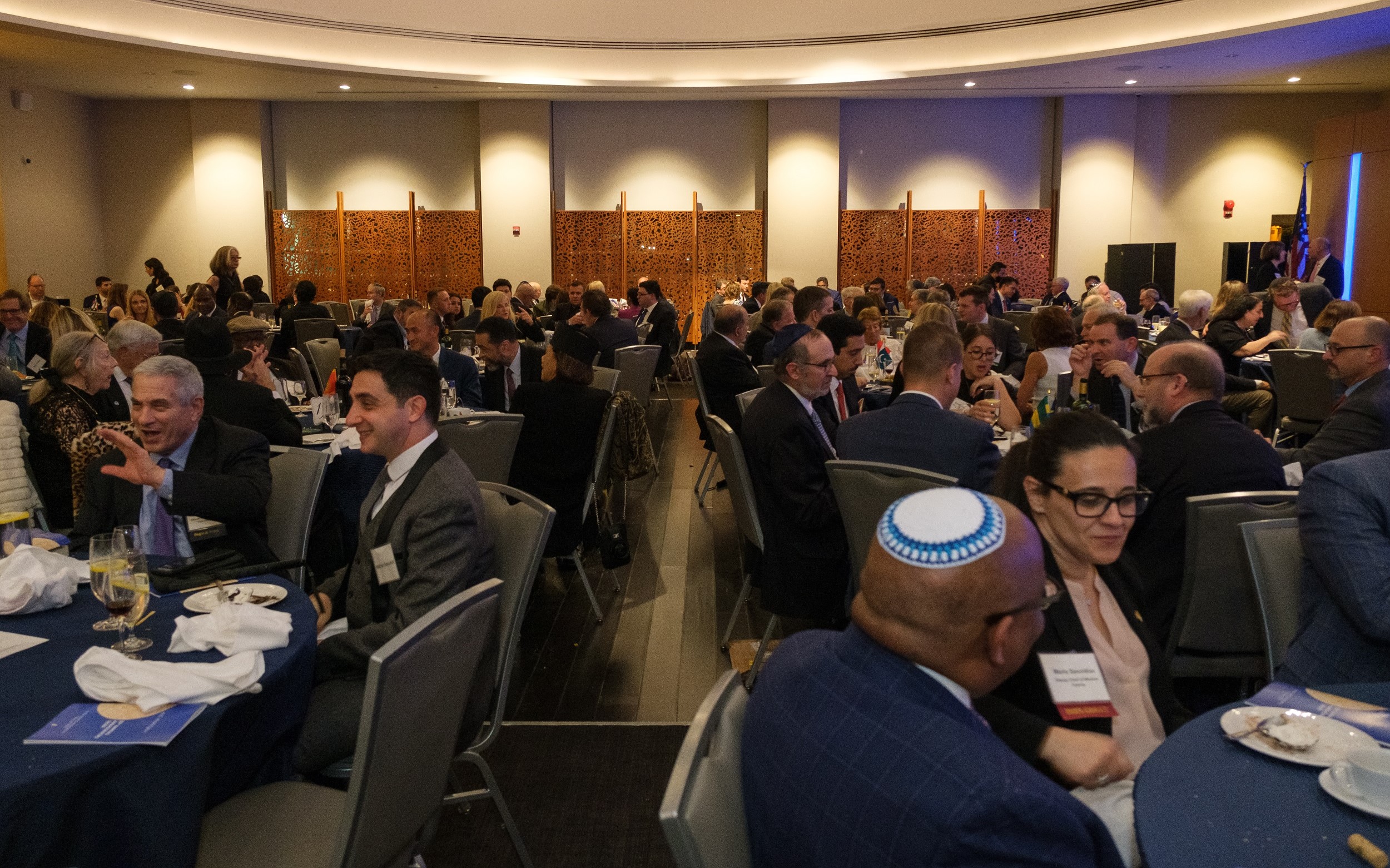 Ukraine’s Ambassador to the United States Oksana Markarova said the Passover story parallels Ukraine’s experience—not only over the experience of the last 90 days since Russia invaded but throughout its history.

“The story of a hard road and fight for freedom during 40 years, for us, has been the same hard road for 400 years,” she said.

Markarova added that the story of Jews and Ukrainians has not been known, as Ukraine has been viewed through the eyes of Russian propaganda, but that the Jewish community in the United States has always known the truth.

“We are the same family. I don’t know any other place like Ukraine where for centuries we lived together,” she said. “We lived through good times and through really bad times. We lived through so many tragedies in the previous century. And so many times before, we’ve said together ‘Never Again.’ And we’ve fought and worked hard—so, so hard, for never again to really be never again.”

But she said that changed for Ukraine eight years ago when Russia annexed Crimea and supported the separatist regions of Donetsk and Luhansk, as well as 90 days ago, when it began a “full-fledged war” in Ukraine, causing 6.5 million mostly women and children to flee the country, 8 million to relocate inside of Ukraine, and an additional more than 10 million people to live under constant shelling or Russian occupation.

“Unfortunately, the whole world saw what it means to live under Russian occupation,” she said.

“It’s even difficult to explain how human beings can do something like that to each other. But we’ve seen it before. We’ve seen in during World War II,” she said. “Unfortunately, not a lot, not everything, not enough has been done after the previous victory to stop this hatred and to stop the ideas that lead to them.”

This, she continued, is why it was so important to fight anti-Semitism. She outlined steps the Ukrainian government had taken before the war to combat anti-Semitism, including adopting the International Holocaust Remembrance Alliance’s (IHRA) working definition of anti-Semitism last year, implementing it into legislation and introducing it into the country’s criminal code.

She said that Ukrainian President Volodymyr Zelensky has made fighting anti-Semitism a priority and that the Ukrainian people are learning lessons from their history, which was not always good, and making sure not to repeat mistakes.

She also talked about the destruction of cities, schools and hospitals in Ukraine, and the enormous loss of life. Despite this, she said, Ukraine will not surrender; that they will win.

Markarova said key ingredients in their fight against Russia have been the bravery of the Ukrainian people, the leadership of their president and the generosity of its allies, especially the United States—its people and government officials.

“I could make a whole speech talking about everyone who has been day and night working with us and working with other friends and allies to put this anti-war coalition together and help us with weapons, with support, with sanctions against Russia,” said Markarova. “Now, of course, we need more. And when you hear me speak in public, this is the big part of every speech. And we always say that we appreciate it, but we need more because we’re dealing with such a powerful enemy. But we need to win, and we know that America is with us.”

Markarova expected to leave the event early but ended up staying the entirety of the dinner. 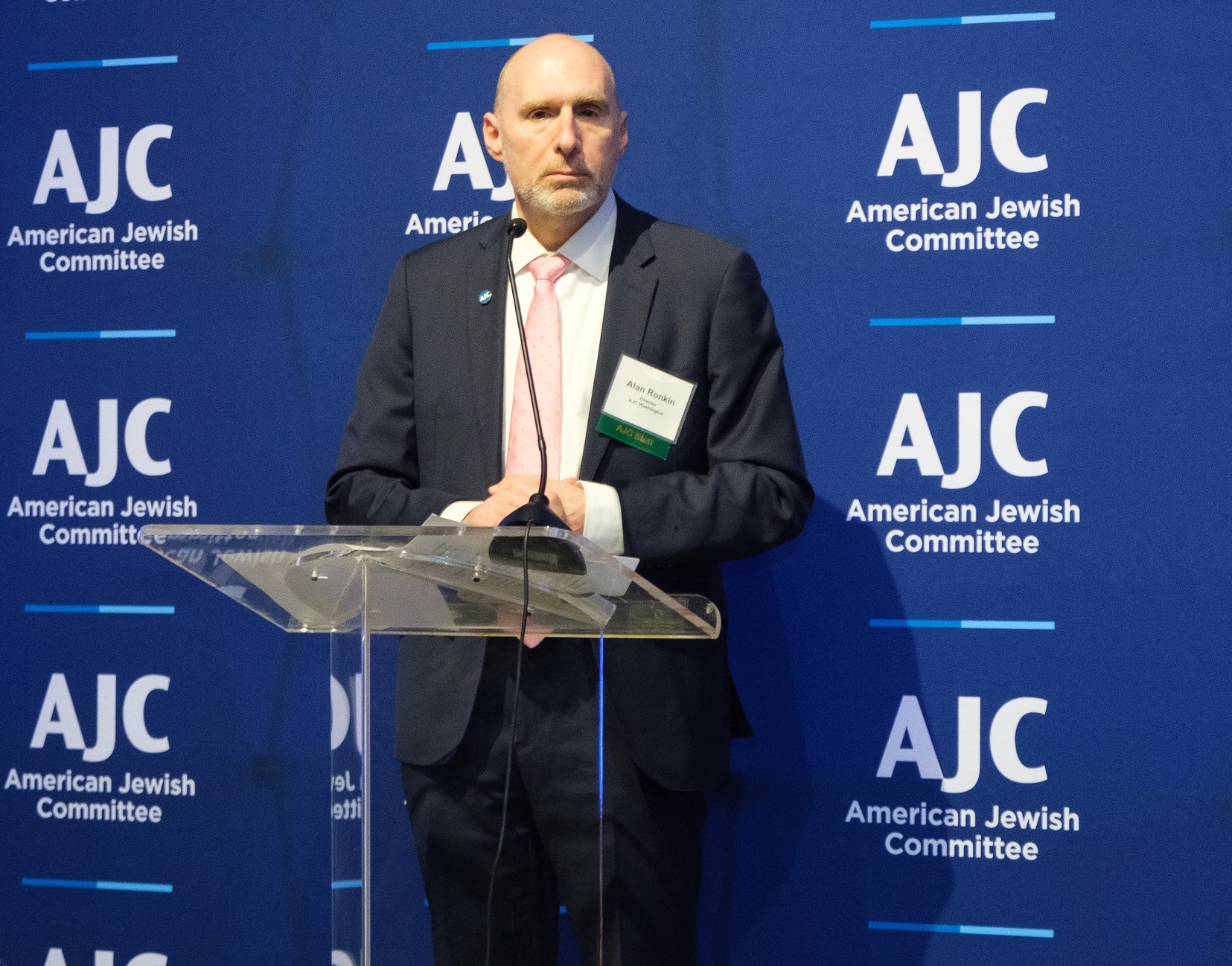 ‘The stakes seem so much higher now’

Alan Ronkin, regional director of AJC Washington, D.C., whose office organized the dinner, recalled what he said at the last dinner shortly after the mass shooting at a mosque in Christchurch, New Zealand, and the mass shooting inside the Tree of Life*Or L’Simcha Synagogue in Pittsburgh, Pa., saying that it was not a time for business as usual.

“Little did any of us know how true those words were,” he said.

Since that time, he said, the country and world have become more polarized, a war has erupted in Europe, and anti-Semitism has been on the rise in the United States and throughout the world.

“The stakes seem so much higher now,” he said.

“Don’t leave here tonight unmoved by the message of the urgency of freedom. The urgency to rid ourselves of bigotry and the urgency to come together and pluralism to preserve the values of our civilization,” Ronkin said to conclude the dinner. “This isn’t about platitudes about building a better world. This is literally about being able to tell our children and our grandchildren that we did not stand idly by as the world seemed to pull itself apart.”