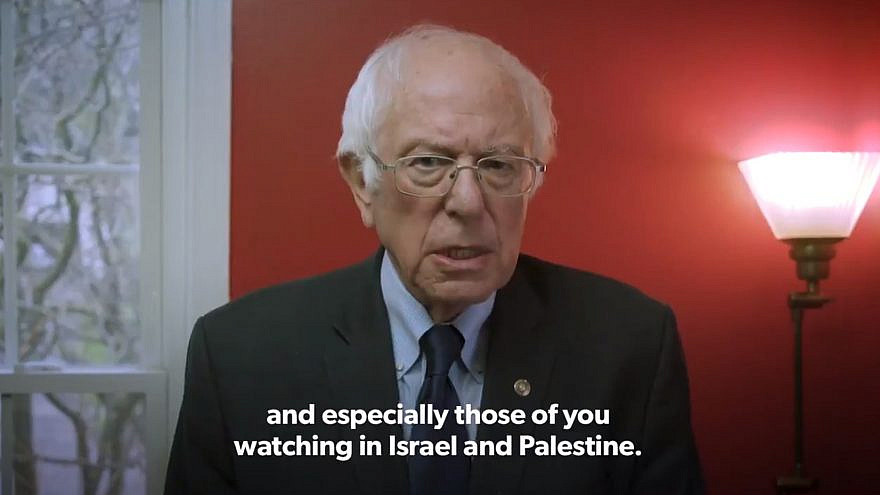 “I strongly believe that we must also be willing to bring real pressure to bear, including restricting U.S. aid, in response to moves by either side that undermine the chances for peace,” Sanders said in his virtual speech. “The truth is that the United States gives an enormous amount of military aid to Israel. It also provides some humanitarian and economic aid to the Palestinians. It is totally appropriate for the United States to say what that aid may and may not be used for.

“In terms of aid to Israel, in my view, the American people do not want to see that money being used to support policies that violate human rights and treat the Palestinian people as second-class human beings.”

Warren called for restricting military aid to Israel if the aid is being used in a way that prevents the parties from moving towards a two-state solution, which she said included being used in the West Bank.

“If we’re serious about arresting settlement expansion and helping move the parties towards a two-state solution, then it would be irresponsible not to consider all of the tools we have at our disposal,” she said.

“By continuing to provide military aid without restriction, we provide no incentive for Israel to adjust course,” she said. “The United States cannot stand for security, human rights, and dignity, and at the same moment turn a blind eye to the suffering of Palestinians under Israeli occupation.”

Halie Soifer, CEO of the Jewish Democratic Council of America, drew a distinction between the opinions of Sanders and Warren with the rest of the Democratic Party, including others who spoke at the conference.

“The Democratic Party Platform, adopted unanimously in 2020, made clear that Democrats strongly support the 10-year, $38 billion Memorandum of Understanding between the United States and Israel finalized by [former] President [Barack] Obama and then-Vice President [Joe] Biden in 2016,” Soifer wrote in an email. “That is JDCA’s position, and it’s the position of the Biden White House.”

U.S. Senator Ben Cardin (D-Md.), a member of the Senate Foreign Relations Committee, told JNS in an emailed statement that he rejects conditioning assistance to Israel.

“The U.S. government maintains robust and wide-ranging engagement with government of Israel, and any and all concerns are shared frankly and honestly and frequently. There is no need or justification for conditioning our assistance.”

Similarly, U.S. Rep. Elaine Luria (D-Va.), vice chair of the House Armed Services Committee, said in an emailed statement that putting conditions on aid to Israel would threaten security and U.S. interests in the region.

“Israel is America’s most vital ally in the Middle East. The aid we provide, roughly $3.8 billion each year, is an investment in the national security of both our countries and serves as a strong deterrent in the region,” wrote Luria. “Israel’s continued stability and economic strength were critical in securing the historic Abraham Accords, which normalized relations with Israel and several Middle Eastern countries. Conditioning aid to Israel would be a grave mistake and would threaten security and U.S. interests in this volatile region.”