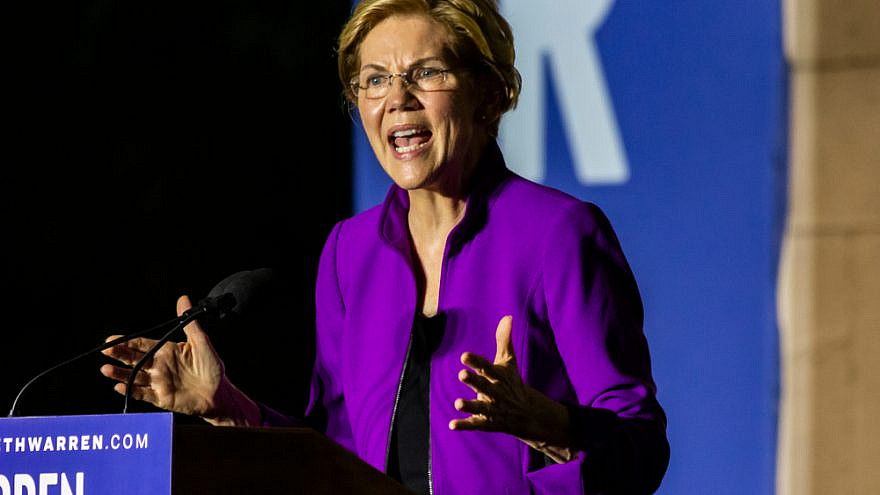 “We should talk about the elephant in the room—America’s military assistance to Israel,” she said.

The senator went on to say that she is committed to Israel’s security, “but if we’re serious about arresting settlement expansion and helping move the parties toward a two-state solution, then it would be irresponsible not to consider all of the tools we have at our disposal.”

“One of those is restricting military aid from being used in the occupied territories,” she stated. “By continuing to provide military aid without restriction, we provide no incentive for Israel to adjust course.”

“To advocate, as Sen. Warren does, that the U.S. pressure Israel to make concessions to the Palestinians while the Palestinian Authority condemns Israel’s existence, incites violence against Israel and Jews everywhere, and continues its ‘pay for slay’ salaries to terrorists and their families, is disgusting.”

As a presidential candidate, Warren positioned herself in favor of pressuring Israel. In October 2019, she said, “everything is on the table” if Israel moved away from a two-state solution and in May 2020 was one of 18 senators who signed a letter opposing Israel’s plan to apply sovereignty over Judea and Samaria.

In her speech to J Street this week at its virtual conference, Warren also endorsed the two-state solution, condemned Israeli settlements and urged Israel to provide COVID-19 vaccines to the Palestinians. She also called for the United States to reopen the PLO mission in Washington, D.C.

“This internal political division and feckless governance within and among the Palestinians themselves remain a major impediment to peace,” she said.