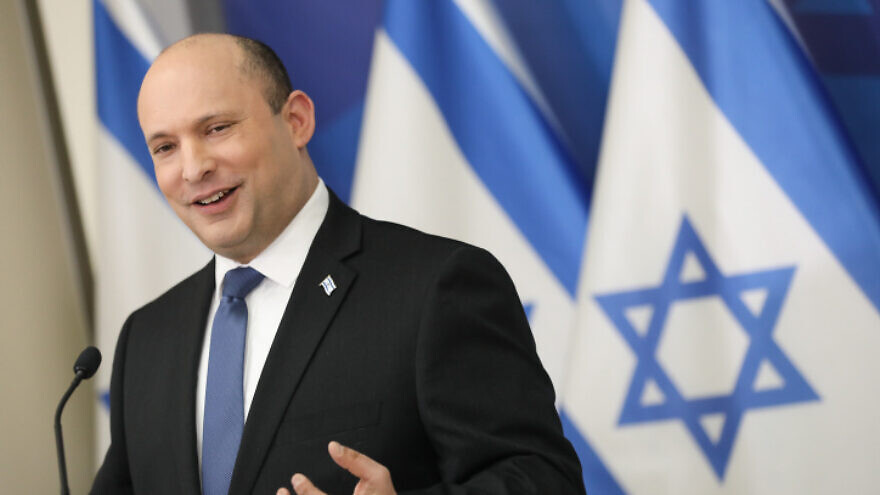 (January 12, 2022 / JNS) Naftali Bennett, appearing for the first time as prime minister before the Knesset Foreign Affairs and Defense Committee on Monday, described Iran as an “octopus that constantly threatens Israel.” He said Israel is shifting to “consistent offense and not just consistent defense.” Analysts who spoke with JNS said Bennett’s remarks were meant to signal Israeli resolve amid reports of progress in the Vienna talks between Iran and world powers to resuscitate the 2015 Iran nuclear deal.

Bennett said as much in his remarks on Monday: “Regarding the nuclear talks in Vienna, we are certainly concerned. It is important for me to say here clearly and unequivocally: Israel is not a party to the agreements. Israel is not bound to what will be written in the agreements if they are signed.”

Eyal Pinko, an expert in national security and intelligence, and a researcher and lecturer at Bar-Ilan University, told JNS that “the Iranians, in the last week or two, have been promoting the idea that the negotiations are going very well—that it’s intense and they are about to do it. (Reuters reported on Jan. 7 that Western diplomats “are hoping for a breakthrough in talks by the end of January or early February.”)

“The fact that nobody knows what is really happening over there, inside the rooms, has Israel very concerned about the outcome and because of the uncertainty you have declarations like Bennett’s,” he said. “He made those comments in the hopes of creating some type of deterrence—to tell the Iranians, ‘We’ll continue regardless of the resolutions or negotiations.’ ”

“Things are happening now. The mood in Vienna seems to be that a deal is possible,” agreed Daniel Pipes, president of the Middle East Forum. “So it seemed to me that Bennett is responding to that and saying, ‘Don’t think because last time you tied the Israeli prime minister’s hands with this, you’re going to do it this time. I preserve complete freedom of action,’ ” Pipes told JNS.

Pinko, however, voiced concern that Bennett might have undercut his own tough talk with inconsistent messaging on Iran, noting the prime minister’s comments in late January that he wasn’t opposed to a “good” nuclear deal.

“Take that with the fact that Aman, Israel’s military intelligence, is saying that a nuclear agreement is OK, and the Mossad is saying it’s very bad. Two intelligence agencies—major intelligence agencies—in Israel are saying different things from day-to-day. The Iranians are clever guys—they are more than clever—and they see there is no coherent message from Israeli officials,” he said.

“They see our willingness to settle or enter an agreement not as a source of strength, but as a source of weakness. I’m sorry to say it but in the Middle East, if you are seeking peace or looking for an agreement, the other side takes that to mean you’re weak,” said Pinko.

Pipes viewed it differently, saying the “Israeli cacophony” of differing opinions is mainly a break from former Israeli Prime Minister Benjamin Netanyahu’s approach, which put Israel on a head-to-head collision with the U.S. administration. “The whole emphasis of the coalition government has been on keeping lines of communication open, not condemning it publicly, saying they’re sure there is an agreement that Israel can live with better than the last one,” he said, noting that Bennett’s most recent statement didn’t condemn the agreement, but nevertheless made it clear that Israel would take action when and if necessary.

‘A matter of emotions, not just technology’

“A nuclear Iran is a real threat to the Middle East,” he said. “Once you have a nuclear weapon, you have full deterrence; you are able to do more things. The influence of Iran will be much greater in the Middle East.”

Pipes is less sure a deal will come off. While U.S. President Joe Biden may be “eager” for a deal—though even then, “not at any cost”—he said that Iranian Supreme Leader Ayatollah Ali Khamenei is “not eager.” Pipes characterized Khamenei’s attitude as an unenthusiastic boss who’s pushed into a project by an eager subordinate.

“The boss has his doubts, and when it doesn’t go so well, his doubts are confirmed. So I’m inclined to think that [Khamenei] is not disposed towards it,” said Pipes, adding that the election of hardliner Ebrahim Raisi to the Iranian presidency “would seem to confirm that.”

Khamenei is “going full-blast” towards building a nuclear weapon capability in any case, and “nobody’s stopping him,” he continued. “The economy—the ‘resistance economy,’ as he calls it—is sufficient to keep going. So I think in part, it’s a matter of emotions, not just a matter of technology.

“He doesn’t like the idea of acquiescing,” said Pipes. “So it comes down to psychology—more than a military issue or politics—it’s psychology.”