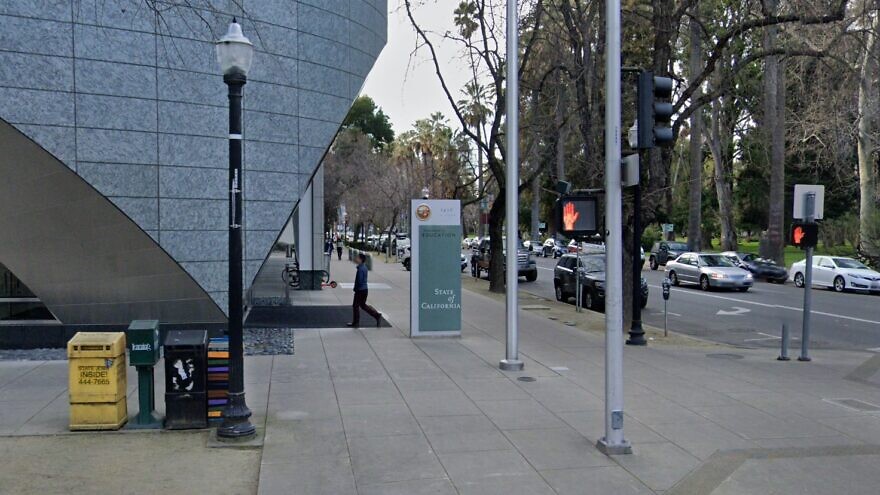 (September 13, 2022 / JNS) This academic year, Hayward Unified School District (HUSD), a public school district serving the city of Hayward in Alameda County near San Francisco, is under fire for partnering with a group that has faced accusations of anti-Semitism and anti-Zionism from Jewish leaders and state officials.

The district in the city of some 163,000 residents unanimously approved a contract with Liberated Ethnic Studies Model Curriculum Coalition (LESMCC) in an effort to comply with a new California law that mandates students to attend a semester of ethnic studies in order to graduate from charter and public high schools, starting with the class of 2030.

In doing so, the district joins the Castro Valley Unified School District, also in Northern California, in adopting the LESMCC’s program.

In 2019, California’s Board of Education released the Ethnic Studies Model Curriculum, which provoked widespread criticism from many in the Jewish community and beyond, who described it as “anti-Semitic, anti-Zionist and BDS-promoting” for lauding the BDS movement and accusing Israel of subjecting Palestinians to “apartheid conditions” comparable those under the former regime in South Africa.

Among those who opposed the curriculum was the state’s Gov. Gavin Newsom, who called it “offensive in so many ways, particularly to the Jewish community.”

The Los Angeles Times editorial board accused the LESMCC of groupthink “designed to proselytize and inculcate more than to inform and open minds.” One example of this blatant bias, it wrote, is its “suggested list of social movements” for students to explore, including the BDS movement.

After intense pushback, the California Board of Education rejected the draft curriculum and approved one that removed the anti-Semitic and anti-Israel canards.

That prompted the curriculum’s creators to launch an online petition in an effort to save it. They went on to establish the LESMCC and offer resources to help school districts implement it.

Under the LESMCC model, ethnic studies refers only to the history and experiences of blacks, “Chicanx-Latinx,” Asians and Pacific Islanders—the chapter includes Palestinians and other Arab Americans, Native Americans and other communities of color. It does not include the Jewish experience in Israel, America or elsewhere.

“Giving taxpayer funds to LESMCC sends a message that the district does not care about the well-being of Jews, Israelis or anyone who values critical thinking,” said Roz Rothstein, CEO of StandWithUs, an Israel-education organization. “Ethnic-studies courses should help build understanding of marginalized communities, fight racism and empower students to make our society better for everyone. Unfortunately, LESMCC has repeatedly taken the opposite approach, fueling hatred and division across California and beyond.”

Rothstein charged that the curriculum makes false allegations against Israel, such as accusing it of colonialism, thus “erasing 3,000 years of the Jewish people’s history in their ancestral home.”

On Aug. 22, the district defended the curriculum in a statement to JNS.

“HUSD strongly and unequivocally condemns all forms of hate, including racism and anti-Semitism,” said Michael Bazeley, HUSD’s public-information director. “The board policy on ethnic studies, adopted in June of last year, advocates for teaching ethnic studies with fidelity to the discipline.”

The district will not be devoting a set time to addressing anti-Semitism because “Jewish studies and Israeli studies are not part of the ethnic-studies discipline,” Bazeley told JNS.

‘Ignores Jewish history in just about every particularity’

The LESMCC has long been embroiled in anti-Semitic controversy. One leader of the organization, Theresa Montaño, characterized the ADL as “white supremacist, right-wing [and] conservative.”

In January, the LESMCC formed the National Liberated Ethnic Studies Coalition with groups such as Teach Palestine Project/Middle East Children’s Alliance and the Arab Resource and Organizing Center, groups that accuse the “Israeli Apartheid Regime” of “systematic settler-colonial violence” and “strongly support the BDS movement.”

In its “Preparing to Teach Palestine: A Toolkit,” the coalition accuses the Museum of Tolerance, a Los Angeles museum devoted to Holocaust history, of “prevent[ing] teachers and students from making connections between the U.S. and Israel as white settler states.” The toolkit also pushes back on the “Zionist” argument that “any discussion of Palestine or critique of Israel creates an ‘unsafe climate’ for Jewish students.”

On May 12, Concerned Jewish Parents and Teachers of Los Angeles (CJPTLA), a group of Jewish and Zionist Los Angeles School District educators and parents, filed a federal lawsuit against the LESMCC. The Deborah Project, the organization providing legal assistance to CPTLA, told JNS it hopes to “prevent the infiltration of a discriminatory, anti-Semitic set of teaching materials and orientation into the LAUSD schools.”

According to Lori Lowenthal Marcus, legal director of the Deborah Project, the LESMCC “ignores Jewish history in just about every particularity,” painting Israel as “the outsider who brutally ‘stole’ the land from the alleged original inhabitants.”

Beyond denying Jewish history in the land of Israel, says Marcus, the LESMCC “teaches a fictionalized version of a history and civilization of those known as Palestinians.”

Another issue highlighted in the lawsuit is the LESMCC’s designation of Israelis as white. According to Marcus, doing so ignores “the reality that more than half of all Israelis are ‘people of color,’ according to their own ludicrous insistence on labeling people based on skin color, real or imagined.”

According to the suit, in an effort to cover its tracks, the LESMCC has deleted many posts on its website about Israel. The LESMCC also urged teachers to “be strategic” and determine if they are supported by their schools or “better off trying to fly under the radar.”

According to material cited in the Deborah Project’s lawsuit, LESMC rejects the “conflation of the State of Israel with Jewish Identity” as a Zionist “strategy.”

The CJPTLA repudiates that assertion, among many others because it “claims the right to control the definition of Judaism,” an action that the CJPTLA say is “explicitly racist and anti-Semitic.” Marcus sees this as an unmistakable attempt to “assert what is and is not Judaism and what is and is not anti-Semitism.”

Marcus sees CJPTLA’s lawsuit as “a clarion call for Americans to reject the unending efforts to cast Jews as the evil-doer and usurper in their homeland, and as malevolent actors with targets drawn on their backs in California.”