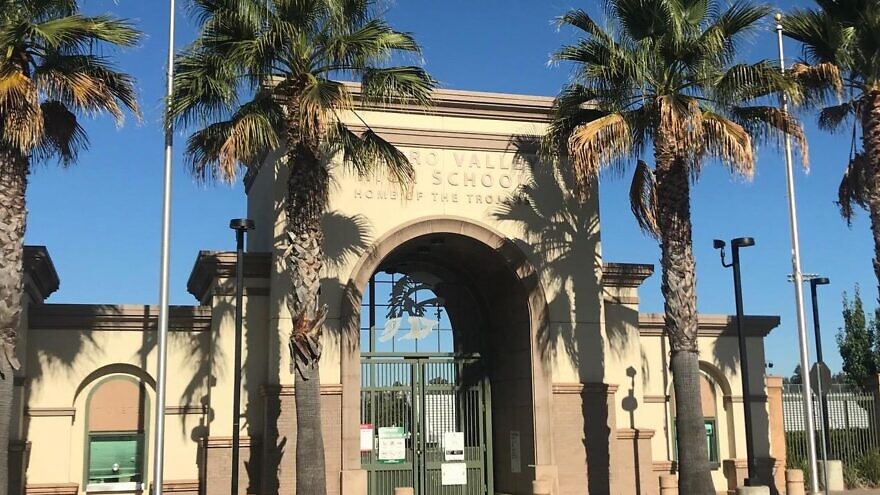 (January 27, 2022 / JNS) Jewish groups in California took out a full-page ad in a local newspaper on Wednesday to voice their displeasure and concern with a school-board decision to engage an ethnic-studies curriculum for high school and middle-school students that they say will lead to hostility towards Israel and Jewish students.

Appearing in the Castro Valley Forum, the ad reads, in part: “The Castro Valley Unified School District claims it is committed to ensuring the inclusion and belonging of all students and families with its tagline ‘All Means All.’ However, it appears this declaration comes with a notable exception: Jews not included.”

The ad is sponsored by local branches of the Jewish Community Relations Council, the Anti-Defamation League, the Jewish Family and Children’s Services Holocaust Center and Chabad of Castro Valley.

On Jan. 19, the school board for the Castro Valley Unified School District unanimously approved—to the tune of more than $82,000—a measure that will allow the Liberated Ethnic Studies Model Curriculum Institute to provide ethnic-studies “professional training” and “curriculum development.”

In a backgrounder to the board meeting, the school district said the Liberated Ethnic Studies Model Curriculum Institute “provides training in the most inclusive model of ethnic studies and encourages collaborative community development of ethnic studies.”

But Jewish groups say they are anything but “inclusive” and that the school district’s decision was, in the words of a community spokesperson, “egregious.”

“Liberated Ethnic Studies is a professional development institute providing training and content for public schools teachers … that is both anti-Zionist and openly antagonistic to the Jewish community at large,” said Tyler Gregory, CEO of the JCRC of San Francisco, the Peninsula, Marin, Sonoma, Alameda and Contra Costa Counties, in a memo to supporters.

‘Glossary of different forms of oppression and prejudice’

In late 2021, California Gov. Gavin Newsom signed legislation that mandates a semester of ethnic studies in high school as a graduation requirement. The law, however, came after a long battle when the initial ethnic-studies curriculum was found to be inherently anti-Zionist and anti-Semitic. The writers of that initial curriculum, which was dropped from the state’s guidance, went on to create the for-profit Liberated Ethnic Studies Model Curriculum Institute, which will now be used in Castro Valley, some 25 miles southeast of San Francisco.

“Despite strong opposition from numerous students, parents and Jewish community clergy and leaders, the board voted unanimously to work exclusively with the drafters and supporters of an ethnic-studies curriculum that California’s board of education rejected for its anti-Semitic content, among other defects,” said Seth Brysk, ADL Central Pacific regional director in a statement. “The leaders of the Liberated Ethnic Studies Model Curriculum Institute produced a curriculum that contained anti-Semitic and extreme anti-Israel bias and excluded anti-Semitism from the glossary of different forms of oppression and prejudice.”

According Rabbi Shimon Gruzman, director of the Chabad of Castro Valley, who spoke out during the Jan. 19 meeting, there are about 1,000 Jews in the area out of a total population of some 66,000. He said that parents are concerned about the potential impact this program will have. He added that over the years, there have been some smaller issues—“nothing major”—between Jewish students and the district, but that may change with the “implementation of this program.”

The J. Jewish News of Northern California quoted a seventh-grade student name Lia, who told the school board via Zoom that “sometimes, it can be hard or exhausting being one of the few Jewish students in her school. I honestly don’t think I could sit in a class if it felt like the teacher was teaching something inaccurate about Judaism.”

Officials from the school district, who declined to talk to Jewish groups in advance of the board vote, did not respond to a request for comment from JNS.

According to Tammi Rossman-Benjamin, director of Amcha Initiative, the organizers behind the Liberated Ethnic group had spent three years trying to mobilize support for their view of ethnic studies. After the state board of education refused their initial curriculum, they created an advocacy group called “Save California Ethnic Studies” to keep the Arab-studies component “which was the most anti-Semitism and absolutely anti-Zionist. They managed to get petitions of support signed by tens of thousands of people.”

Though that move also failed, it gave the organizers enough clout that after Newsom signed the law mandating an ethnic-studies requirement in California schools, there was no doubt that those behind the Liberated Ethnic group would be involved.

“Once schools had to adopt the curriculum, they knew where to turn, and it wasn’t to the state board of education curriculum but to this radical version because they [the founders of Liberated Ethnic] already had their hooks into all of these school districts,” said Rossman-Benjamin. “There are over a dozen school districts that either have the Liberated Ethnic Studies [group] running the show in a school or involved in teacher training.”

This is not, she said, “just about one school district. It is about a machinery that has been set into motion and will keep moving … . All those wonderful guardrails that the Jewish community thought were in place” to ensure that the anti-Semitic and anti-Israel elements would not be included are meaningless, she said. “It’s like a picket fence in a tsunami. There’s no way to stop it.”

Rossman-Benjamin went as far as to call the ethnic-studies requirement “state-sponsored anti-Semitism … because the state is mandating that every student take a course that, because of this Liberated group, portrays Jews and Israel in anti-Semitic ways.”

Further, they posit that while a multicultural curriculum “focuses on inclusive or diverse cultural perspectives on any given topic,” ethnic studies “focuses on the historical and lived experiences of Blacks, Chicanx-Latinax, Asian and Pacific Islanders (including Palestinians and other Arab Americans), Native American and other radicalized communities of color.”

Their curriculum includes a section called “Preparing to Teach Palestine: A Toolkit” and includes links to articles such as “The ADL Is Not an Ally: A Primer,” “Together We Rise: Palestine as a Model of Resistance,” and “The Business of Backlash: The Attack on the Palestinian Movement and Other Movements for Justice,” which is from a group called the International Jewish Anti-Zionist Network.

For its part, the California Legislative Jewish Caucus, which includes 18 members of the state’s house and senate, put out a statement saying it is “closely monitoring the situation and deeply troubled by the district’s decision to contract with providers who have demonstrated bias against the Jewish community. We are also shocked at reports that the district refused to meaningfully engage with the Jewish community prior to the vote.

“Our caucus will continue to support our community partners and will take all necessary steps to ensure that any curriculum adopted by the district is consistent with state law, which unequivocally forbids any material that could promote ‘any bias, bigotry or discrimination’ against the Jewish community.”

That, Rossman-Benjamin said, is too little, too late. She warns that other states may soon be dealing with the same issues, in particular Massachusetts, where a “anti-racism, equity and justice in education” bill is making its way through the state legislature.

“This is like déjà vu,” she said. “You have to look at the way things are lining up in Massachusetts to ring the alarm bell. This is going to play out just like it is in California, and you need to stop it when you can because we didn’t stop it when we could.”