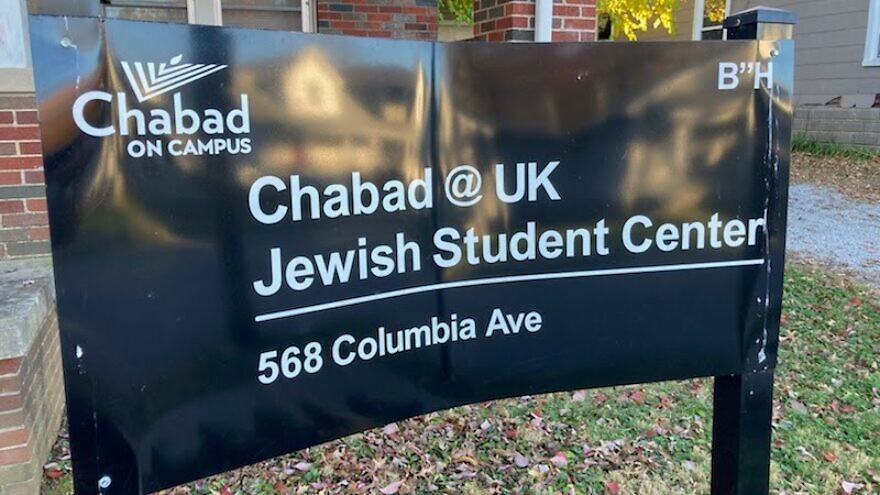 A damaged sign, along with a menorah, at Chabad at the University of Kentucky Jewish Student Center, Nov. 8, 2020. Credit: Courtesy.
Spread the word.
Help JNS grow!
Share now:

(November 11, 2020 / JNS) Police in Lexington, Ky., are investigating the vandalism of a menorah and sign at Chabad at the University of Kentucky Jewish Student Center. This is the fourth time that the sign has been vandalized over the years and comes just months after the Chabad-Lubavitch emissary received threats over the phone.

No one has been arrested yet for the vandalism. Several security cameras are stationed outside of the Chabad center, and an individual is going through the video for clues to the perpetrator.

Rabbi Shlomo Litvin, co-director of the campus center, discovered that the menorah had been shifted off its base and the sign bent in half on Sunday. “Because this has happened before, we have a very strong sign, and it took a lot of force to bend it,” said Litvin, who immediately called the police.

It was in mid-August when, following the release of neo-Nazi fliers in a neighboring community, that Litvin received a call from a member of the group who told him, “My Jewish blood will not protect me.’ ”

Then, as now, the rabbi said, “The Lexington Police are amazing and have been incredibly supportive to our community. Also, people have knocked on our door to say they are sorry this happened. I’ve also gotten texts, emails and calls of support from all over the country; it’s been very meaningful.”

The campus Chabad center serves more than 200 Jewish students and faculty at the University of Kentucky. However, due to the COVID-19 pandemic, students cannot come in right now for Shabbat meals, classes or just to socialize. As a result, the sign has taken on new significance as the de facto “hang out” spot, which makes the vandalism even more painful to the students.

“It is where students come to pick up their Shabbat meals or their materials for our online classes,” said the rabbi. “They’ll walk by the sign and text us, and say, I just walked past the sign and was thinking about you.

“For young people to walk by and see that is an attack on everything,” he continued. “That’s their connection right now.”

While they cannot have an in-person program in response to what has happened, Jewish students are taking the initiative and, in practicing the teachings of the Lubavitcher Rebbe—Rabbi Menachem Mendel Schneerson—looking to help in other concrete ways.

“The students are making resolutions to be kinder to each other and do one good deed to bring light onto campus,” said Litvin. “It’s been an incredible grassroots response.”