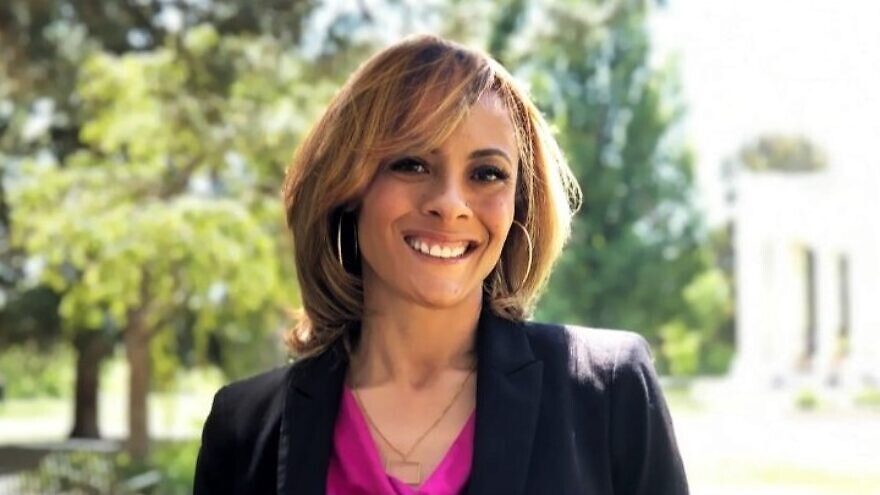 (June 24, 2022 / JNS) A Democratic candidate running to represent District 6 in the Colorado State House drew condemnation from local Jewish leaders after news of her past tweets mirroring anti-Semitic rhetoric emerged.

Candidate Elisabeth Epps’s Twitter posts were first reported on June 10 by Intermountain Jewish News. Screenshots of the controversial tweets were posted on social media earlier this week by the watchdog group StopAntisemitism.org.

Epps serves as executive director of the Colorado Freedom Fund, a nonprofit organization that helps bail out individuals who cannot afford the cost of a bond in Colorado.

Her tweets, some of which invoked anti-Semitic tropes about Jews and money, were shared on Epps’s personal Twitter account @elisabeth, which is now set to private mode.

“Rebecca and Benjamin. Hmmm. #POTUS starts out #SOTU low-key reminding you that Israel is constituent #1,” Epps wrote in one tweet.

In another, she wrote: “We are just right for old bigoted Jewish billionaires with Alzheimer’s tho! We’re their grandkids age!”

“I want to be a Jewish lawyer billionaire pro-sports team owner when I grow up. 1 down, 3 to go,” stated another of Epps’ tweets.

Antisemitism alert (thread) – Elisabeth Epps (@elisabethepps), candidate for Colorado House District 6, is causing outrage in her district after her horrific tweets mirroring white supremacist rhetoric of Jewish power and control have come back to light. pic.twitter.com/EYFVyC8kYo

In 2014, according to tweets Intermountain Jewish News reviewed, the candidate accused Israel of “colonization” and “apartheid,” tweeting, “The phrase ‘Palestinian-Israeli conflict’ = misnomer/lie. Colonization, apartheid, genocide & nationalism are not ‘conflict.’ ”

In 2020, Epps posted the phrase “From the river to the sea” on her Twitter account, an expression that alludes to the elimination of Israel.

“It is incumbent upon all members of the Jewish community—and all Colorado citizens of good faith—to say NO to this apostle of hatred towards the Jewish state,” wrote 30 Colorado Jewish leaders in an open letter published in  Intermountain Jewish News.

“We do not need a Colorado state representative who falsely characterizes Israeli policy as ‘colonization, apartheid, genocide and nationalism,’ ” stated the letter, adding that Epps has “demonstrated that she is uninformed about Israel’s position and shows no interest in educating herself.”

‘I am willing to own my words’

Epps responded to reports about her tweets in a June 10 statement she shared via Facebook.

“I have been and will always be outspoken in my condemnation of anti-Semitism, even as I acknowledge that I am not its arbiter. It is clear that folks researching my candidacy searched for the words ‘Israel’ and ‘Palestine,’ ” she said.

“When I decided to run for office, I could’ve scrubbed my social-media presence or deleted my Twitter like so many politicians do. I didn’t—and still haven’t—not because I stand firm in everything I’ve ever said, but because I am willing to own my words, to learn and to allow room for growth,” stated the news release.

Despite concerns about her views, Epps has support among some Colorado Jews. A group calling itself “Colorado Jews for Elisabeth Epps” published a petition expressing support for her as she battled the controversy. “We condemn the weaponization of anti-Semitism to divide marginalized people and attack progressives,” wrote her Jewish supporters. “We condemn the conflation of criticism of the government of Israel with anti-Semitism.”

One of the petition’s signatories, Brian Feld, rabbi emeritus at an independent Jewish group called Judaism Your Way group, said: “A basic Jewish principle is that people are given the benefit of the doubt and can grow and learn.”

He added, “I align with her values as a prospective state legislator more than her competitors.”

Woodrow told Intermountain Jewish News in a statement issued this week that the criticism against Epps was the work of a “corporate lobby” that “has dumped hundreds of thousands of dollars into opposing Elisabeth’s candidacy.” The “accusation that Elisabeth is anti-Israel and anti-Semitic (and that I, by extension, put my politics before Israel and the Jewish people),” wrote Woodrow, “is as offensive as it is wrong.”

On Epps’ tweet stating ‘From the river to the sea,’ ” said Woodrow, “I’ve since spoken with her about how it’s interpreted in the Jewish community. She was saddened, yet willing to learn this and has resolved to be more careful in her language.”

Not everyone was so impressed.

“Furthermore, in her follow-up statement pertaining to her posts, Epps never once stated ‘sorry’, ‘apologize’ or ‘regret’—something we find extremely troubling and has us questioning her sincerity.”

Rez’s organization also pointed out that Epps is a member of, and has been endorsed by, the left-leaning Democratic Socialists of America, which has been known for its anti-Israel rhetoric.