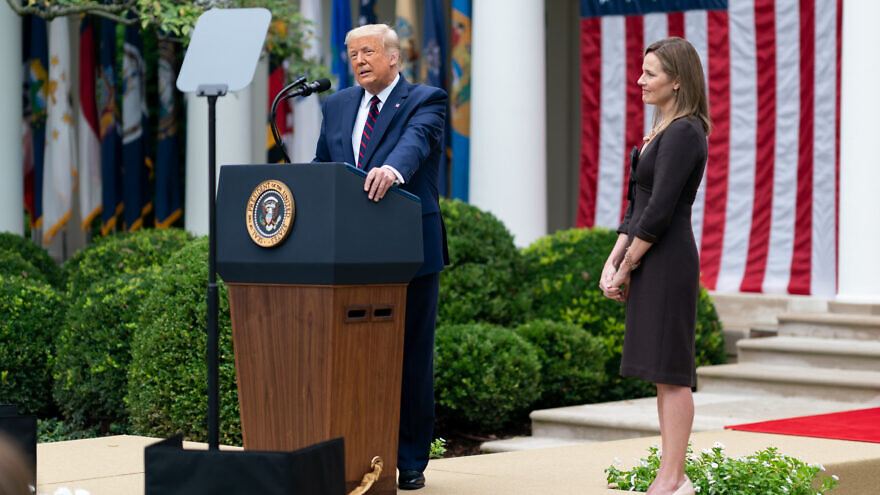 (November 15, 2022 / JNS) Former U.S. President Donald Trump on Tuesday announced his intention to run for president in 2024, vowing to renew American exceptionalism if he is once again elected to the White House.

“In order to make America great and glorious again, I am tonight announcing my candidacy for president of the United States,” Trump told a crowd of supporters gathered at his Mar-a-Lago estate in Florida.

“Two years ago, we were a great nation, and soon we will be a great nation again,” he said, adding, “This is not just a campaign, this is a quest to save our country.”

The announcement came after Trump formally filed a statement of candidacy with the Federal Election Committee.

The move comes as Republicans are contemplating their alliances on the heels of the midterm elections, which failed to materialize into a “red wave” for GOP candidates. Instead, Democrats will hold the Senate, while an expected narrow Republican majority in the House has yet to be confirmed more than a week after the voting.

Some in the party have blamed the extremism and lack of quality of the candidates, most of whom won their primaries after receiving an endorsement from Trump.

Despite looking like the leader of the party before the midterm, Trump’s hegemony is being challenged by other prospective candidates.

The conservative Club for Growth released internal polls of potential GOP candidates in the first two primary states of Iowa and New Hampshire, as well as Florida and Georgia. The results showed Florida Gov. Ron DeSantis leading Trump in Iowa and New Hampshire for the first time—the same poll in August showed Trump leading by wide margins—while extending his lead in Florida and Georgia. Another survey of likely GOP voters in Texas, conducted by CWS Research between Nov. 12 and 13, showed DeSantis leading Trump by 11 points.

On Sunday night, Trump received the Zionist Organization of America’s (ZOA) Theodor Herzl Medallion for his achievements on behalf of Israel and world Jewry, including signing an executive order to extend protection under Title IX of the 1964 Civil Rights Act (banning discrimination based on race, color or national origin) to Jewish and pro-Israel students on college campuses; signing into law the Taylor Force Act, which reduced financial aid to the Palestinian Authority so long as it continued to pay stipends to terrorists and the families of slain terrorists who murdered Israelis or Americans; allowing Americans born in Jerusalem to list Israel as their place of birth on their passports; moving the U.S. embassy from Tel Aviv to Jerusalem; recognizing Israeli sovereignty over the Golan Heights; withdrawing from the Iran nuclear deal; forging the Abraham Accords between Israel and four Arab nations: the United Arab Emirates, Bahrain, Morocco and Sudan; and being the first U.S. president to pray at the Western Wall.

At the ZOA event, Trump called for increased efforts to persuade Jews to vote Republican.

“We have some people in this country that happen to be Jewish that are not doing the right thing for Israel, you know that? Too many,” he said. “Just as you [ZOA National President Mort Klein] were saying how much we’ve done, as you know the Democrats get 75% of the [Jewish] vote, which is hard to believe, right? We can’t let that continue.”