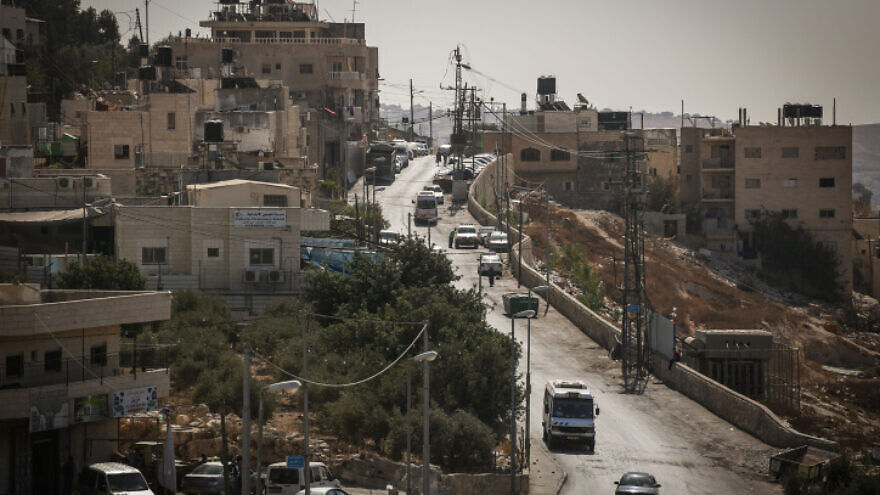 (August 10, 2022 / Israel Hayom) A 16-dunam (four-acre) noncontiguous parcel of land on a green hilltop in eastern Jerusalem, which lies between the security barrier and the eastern border of the Jabel Mukaber neighborhood, could soon become the most volatile in the city.

The Israeli Justice Ministry has completed the process, conducted secretly, of transferring ownership of the land to the state, on a temporary basis.

Civil researchers hired by the ministry’s Custodian of Absentee Properties Department secured proof that the land was purchased by Jews in the early twentieth century, and a court ruling has confirmed those findings.

In 1924, rents in Jerusalem jumped, making life difficult for the city’s Jewish residents. A group named “Vaad Haschenim” (The Neighbors’ Committee) was set up to purchase land and build a new neighborhood where more affordable housing would be built. They reached out to the Abu Dis town authorities and inquired about purchasing some 400 dunams of land (approximately 100 acres).

The head of the purchase association, which was known as Agudat Hadayarim (Tenants’ Association), was chaired by Yehoshua Avizohar Singalovski (the brother of the founder of the Ort chain of technical schools).

In 1927, the association completed the purchase of 453 dunams (112 acres) of land. Construction was supposed to begin in 1930, but in 1929 a spate of anti-Jewish riots erupted. The plans for a Jewish neighborhood were shelved and building never began.

After the riots, Yishuv authorities decided not to build in any of areas of land surrounded by Palestinian areas because of the difficulty of defending them, and rather concentrate building efforts in contiguous areas. After the Great Arab Rebellion and various irregularities discovered in the building association, the group stopped all its activities in April 1936.

Of the 453 dunams acquired, the association managed to register only 371 dunams (91.5 acres) in Abu Dis, leaving 82 dunams legally unregistered, even though they had been paid for.

In 1948, when the city of Jerusalem was divided following the War of Independence, Abu Dis remained under Jordanian control. It grew and new construction started on some of the land the Jews had purchased, even though they were registered with Jordanian authorities.

In 2003, as the Second Intifada raged, Israel built its security barrier, anchoring the existing reality in which only 60 of the 400 or so dunams purchased were left on the Israeli side. The land was transferred to the authority of the Custodian of Absentee Properties. Throughout the years, the ministry located some of the heirs of members of the original Agudat Hadayarim, and transferred the land to them, which were then purchased by the philanthropist Irving Moscowitz.

In 2004, 10 Jewish families moved onto the plots as part of the work of the Ateret Kohanim group.

However, the largest parcel of this land on the Israeli side of the security barrier, known as F, was never registered with the Jordanians as Jewish-owned land, and is considered abandoned property.

The F land is located in an area known as Sawahra, named after the Bedouin tribe that lives there. It appears that a handful of Arab homes currently stand on the land.

For years, the Custodian of Absentee Properties assumed that Agudat Hadayaim had purchased this land, too, but despite efforts that began in 2005 was unable to find proof. In 2017, Sigal Yaakobi was appointed Custodian General, and now serves as a judge in financial cases with the Tel Aviv District Court.

In 2021, civil researchers Yaakobi hired successfully proved that the F land belonged to Jews. That same year, the evidence was presented to the Jerusalem District Court, and Judge Tamar Bar Asher accepted the Justice Ministry’s arguments and approved the temporary transfer of the land to the Custodian of Absentee Properties.

Israel Hayom has learned that the Custodian General, currently managed by Benzi Feigelson, is trying to locate the heirs of the original purchasers. Feigelson has also instructed his staff to conduct more research on the rest of the land in the area.