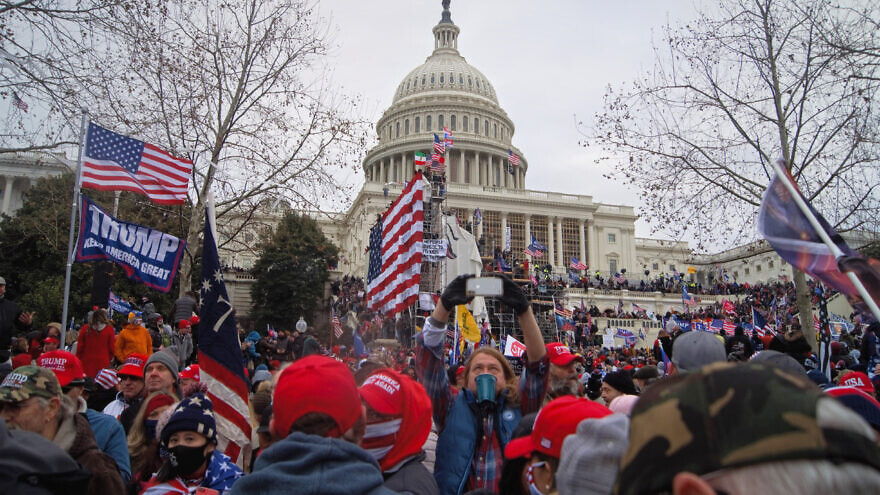 (January 10, 2023 / JNS) A white supremacist and far-right personality who recorded video of himself storming the U.S. Capitol building on Jan. 6 was sentenced to two months in prison for partaking in the mob’s attack.

Anthime Gionet, 35, also known as “Baked Alaska” to his social media followers, was sentenced to 60 days in prison followed by two years of probation by U.S. District Judge Trevor McFadden. Gionet pled guilty in July to a misdemeanor count of parading, demonstrating or picketing inside a Capitol building.

“You did everything you could to publicize your misconduct,” McFadden told Gionet. “You were there encouraging and participating fully in what was going on.”

Gionet incriminated himself and other rioters with a video that he streamed to a live audience of roughly 16,000 followers, where he encouraged other rioters to stay in the Capitol. The far-right personality filmed himself inside an office for Sen. Jeff Merkley (D-Ore.) picking up a telephone and pretending to report “a fraudulent election.”

“We need to get our boy, Donald J. Trump, into office,” Gionet said in the video as he joined others in changing “Patriots are in control!” and “Whose house? Our house!”

Before leaving, Gionet called a Capitol police officer an “oathbreaker.”

Gionet initially celebrated online when his case was reassigned to McFadden, who is a Trump nominee. On a livestream, Gionet praised McFadden as a “very awesome judge who is a pro-Trump judge and one of the judges that let one of the guys off innocent in his trial,” in reference to a New Mexico man—Matthew Martin—who was acquitted of riot-related charges in April 2022. Martin is the only Jan. 6 defendant who has been acquitted of all charges after a trial.

Gionet initially was a rapper and Internet prankster, before working as a commentator at BuzzFeed where he supported libertarian and progressive positions such as ending the “war on drugs” and supporting the Black Lives Matter movement. Gionet would go on to use social media to become an influential figure in far-right circles. In 2017, Gionet was scheduled to speak at the white nationalist “Unite the Right” rally before violence erupted on the streets of Charlottesville, Va.

In November 2021, Gionet was charged and later found guilty of criminal damage for vandalizing a Hanukkah menorah outside the Arizona Capitol. Footage from Gionet’s live video stream viewed by the Phoenix New Times, before it was deleted, shows him ripping a “Happy Hanukkah” sign off the front of the menorah. In the clip, while vandalizing the religious item, Gionet said, “No more ‘Happy Hanukkah,’ only ‘Merry Christmas.’”

The far-right personality also has a history of posting antisemitic content online, including a gas-chamber meme on social media, and has been seen spending time with Holocaust deniers and other white supremacists such as Nick Fuentes.