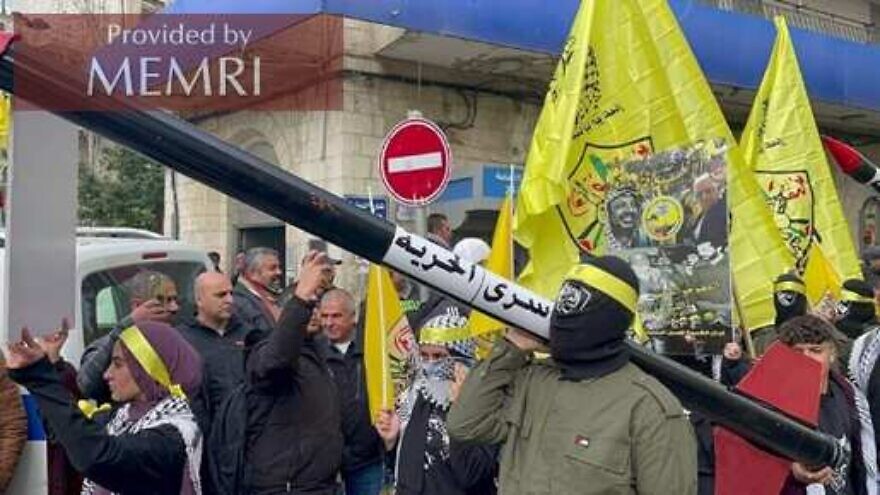 A Palestinian militant carries a rocket with the words “Prisoners of Freedom” on it during mass rallies on Dec. 30 and Dec. 31, 2021. Source: Facebook via MEMRI.
Spread the word.
Help JNS grow!
Share now:

According to a Middle East Media Research Institute (MEMRI) report, the rallies featured armed and masked activists from Fatah’s military wing, the Al-Aqsa Martyrs Brigades, even though the Palestinian Authority outlawed the group nearly 15 years ago.

Participants carried models of rockets and waved posters of Fatah terrorists with children holding weapons along with the Koran.

During a rally in Ramallah on Dec. 30, Fatah deputy chairman Mahmoud Al-Aloul stressed that the Palestinian people would not stop its struggle and its “resistance to the occupation” until it achieves freedom and independence.

He added that Fatah believes in “all types” of resistance.

According to MEMRI, Al-Aloul also extended greetings to prisoners Marwan Barghouti, 62, and Karim Younes, 74—two Fatah Central Committee members who are serving lengthy sentences in Israeli prison for involvement in the murders of Israeli citizens.