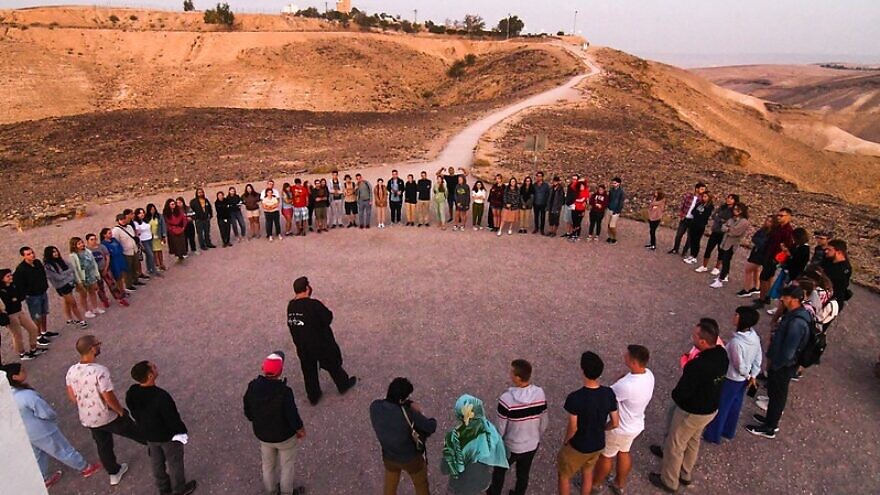 (March 31, 2022 / JNS) At 5:30 p.m. on Feb. 26, as the first round of shelling began on her hometown of Mykolaiv, Ukraine, Valeriya Guseva received a flurry of text messages from her family and friends. “They all told me that they are glad I’m safe. They were the ones in danger, and they were thinking about me,” she says.

Guseva, 25, is completing an internship with a graphic design firm in Jerusalem through Masa Israel Journey, a program that provides professional enrichment opportunities for young adults ages 16 to 35. Her family, including her 88-year-old grandmother, who is a Holocaust survivor, remains in Mykolaiv. Two weeks ago, her grandfather passed away from a heart attack.

Guseva is one of 1,750 fellows from Ukraine, Russia and other former Soviet countries currently registered for long-term career programs through Masa. The organization has seen a 200 percent jump in applicants from the region since the war began, according to Reuven Greenberg, Masa’s head of programming for Russian speakers. “We also see a new trend among communities that typically don’t apply or register—namely, unaffiliated Jews.”

Greenberg expects 300 Russian-speaking fellows to arrive in Israel by the end of April, many on flights sponsored by the Jewish Agency for Israel. Masa is covering the full cost of their programming, and fellows automatically receive a one-year visa to Israel with the option to extend. For Ukrainian and Russian fellows already in Israel, the organization is providing psychological counseling, as well as extracurricular trips and events, to help them process what’s going on in their home countries. 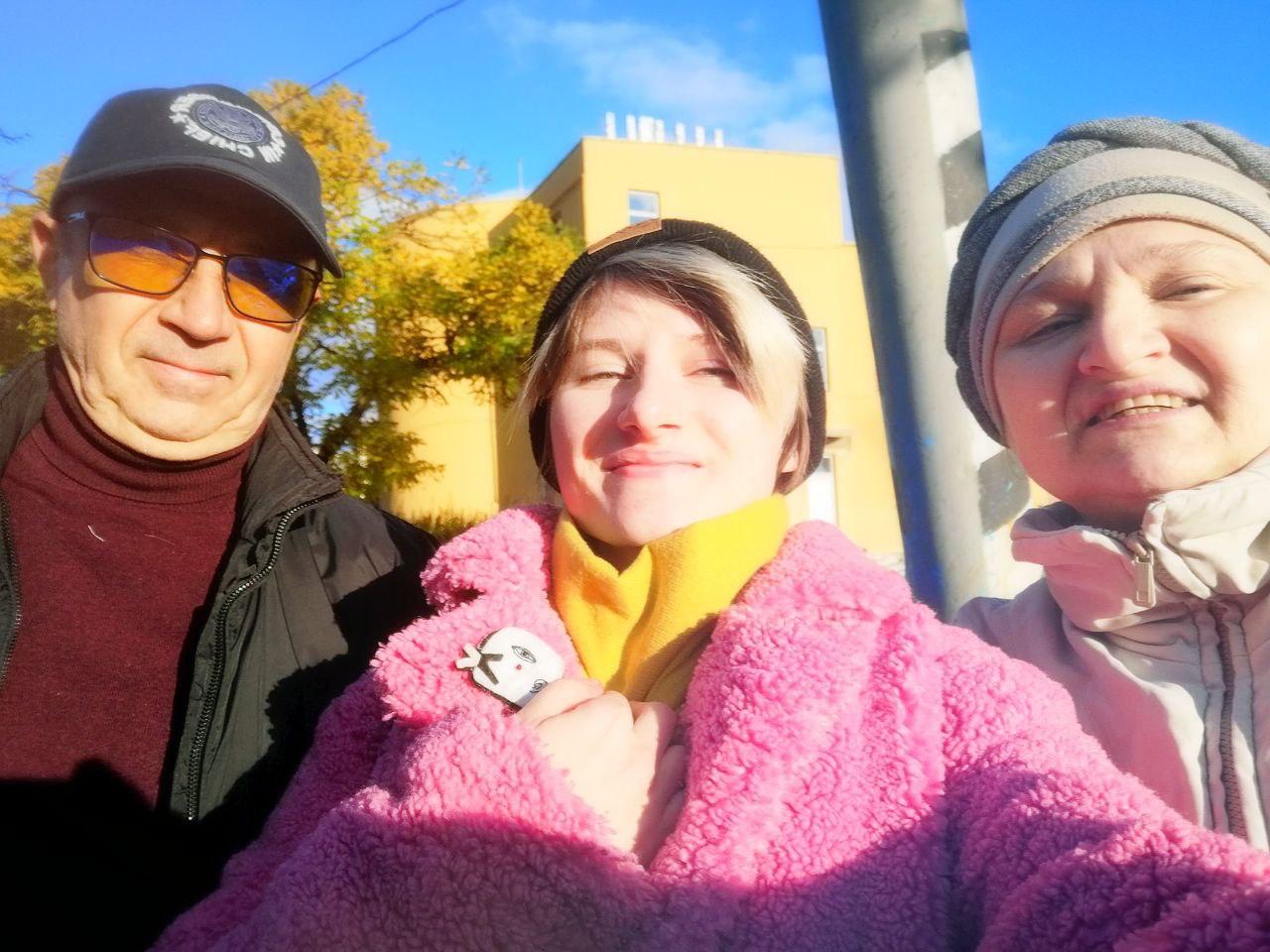 On March 1, Israeli Prime Minister Naftali Bennett met with a group of Ukrainian fellows to hear their many stories. Among them was Leonid Hirshenzon, 23, who is studying web development in Ayanot, a youth village in central Israel. Hirshenzon, who holds a degree in computer engineering, grew up in Kharkiv.

“My parents’ apartment building was hit on March 3,” he told JNS. “After that, they couldn’t stay there anymore. It has no heating, no windows, no electricity, no water. It was negative 12 degrees Celsius at night.” His parents are now living in their office in a safer part of the city, shuttling back and forth to his grandparents’ apartment to shower and prepare food.

Hirshenzon is making aliyah and plans to pursue a master’s degree through a Jewish Agency program that incorporates intensive Hebrew study. He still hopes to convince his parents to join him in Israel.

“My feelings have been changing,” he says. “The first phase was I just wanted them to run. I didn’t understand the problem with my grandparents. Now it’s more like a stalemate. They’re in the same conditions that they were two weeks ago. I feel I can’t control the situation. There’s nothing I can do.”

‘I feel a lot of support here’

On the morning of Feb. 24, Olga Stalgorova awoke to the sound of her roommate crying. A Moscow native, Stalgorova works as a producer of online courses for the Higher School of Economics through Masa’s remote work program. She shares an apartment in Jerusalem with three other fellows, two of whom are from Ukraine. “When the war started, I didn’t want to believe it,” she says. “I don’t support it. I have a lot of friends in Ukraine.”

In the weeks leading up to the war, Masa was flooded with applications from Ukraine, says Greenberg. “However, since the sanctions started, we see a larger increase in interest from Russian fellows,” he notes. Eager to escape economic turmoil and the threat of compulsory military service, many are applying to the program through virtual private networks (VPNs) to avoid government monitors.

Stalgorova, 24, was raised in a Christian home and began exploring her Jewish roots as an adult. She had intended to return to Moscow after her year in Israel. Now, she says, she will stay: “Even if the war would stop right now, the next 20 years will be economic and political suffering in Ukraine and Russia. I can’t imagine what will happen.” 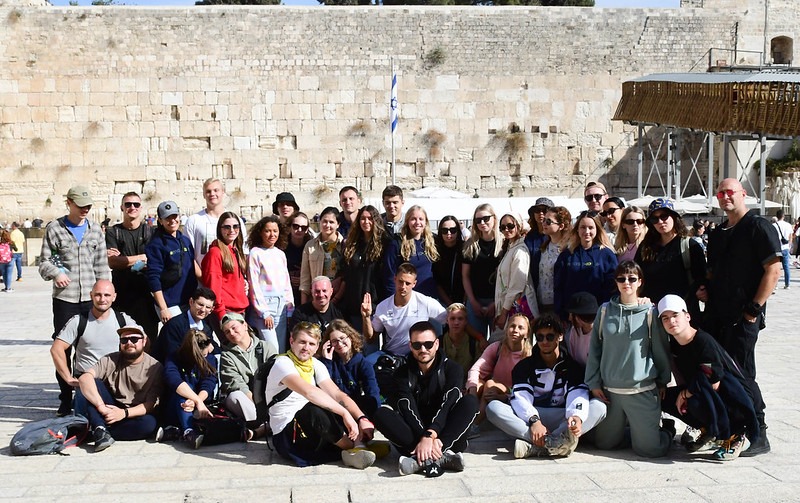 Participants from the former Soviet Union in a Masa Israel Journey program at the Western Wall in Jerusalem. Credit: Courtesy.

It’s a moment when her dual identity—Russian and Jewish—is both convenient and comforting. “I like being in a Jewish environment,” she says. “I have heard stories that Russians are under pressure in other countries, but I feel a lot of support here.”

There are some challenges to be overcome; her salary is worth half of what it was before the war, she says, and her Russian credit card is blocked. Still, she feels lucky. “I have a lot of friends who are trying to escape Russia. I really feel privileged that by chance I came here before everything started.”

Mixed feelings—gratitude, guilt, fear—are something the Masa fellows from Ukraine and Russia have in common. The night before she met the prime minister, Guseva created a comic book to document her experience. The final pages show her friends crouching in bomb shelters and a cracked I-Phone screen surrounded by rubble that reads, “I’m glad you are safe.”

“I can show my feelings with art and help other people to understand,” says Guseva. “Many people said, thank you—now we know what we’re feeling.”