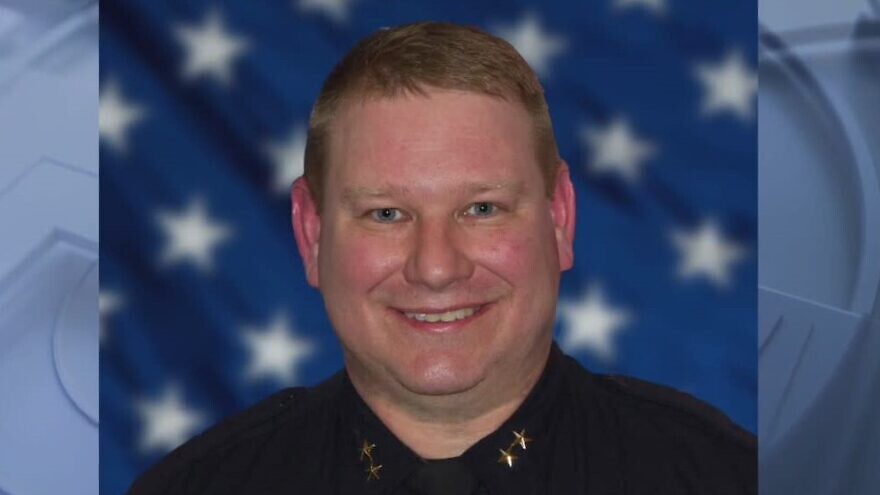 Derek Kammerzell, who was with the Kent Police Department for nearly 30 years, was given $1.52 million to resign and not seek to be rehired. Source: Screenshot.
Spread the word.
Help JNS grow!
Share now:

(June 15, 2022 / JNS) A suburb of Seattle is paying a former police chief who hung a Nazi insignia on his office door, as well as joked about the Holocaust, more than $1.5 million to resign and not seek to be rehired, The Associated Press reported.

Derek Kammerzell, who was with the Kent Police Department for nearly 30 years, was originally given two weeks of unpaid leave after he joked about the murder of 6 million Jews and hung the insignia of the Obergruppenführer, which during the Holocaust indicated someone was a high-ranking Nazi SS officer, on his office door in September 2020.

Following outrage from local residents, including members of the Jewish community, Kent Mayor Dana Ralph ordered Kammerzell to be put on paid administrative leave and demanded his resignation. That led to a dispute between Kammerzell’s lawyers and the city that was likely to head to litigation, according to the AP.

The city announced last week that it had resolved the matter through negotiations and would pay Kammerzell $1,520,000 to resign. If the city only fired Kammerzell, he could have been rehired through arbitration under federal and state labor laws, noted officials.

The Jewish Federation of Greater Seattle and its Jewish Community Relations Council issued a statement on June 10 saying it has been working with the city of Kent since January to address the situation.

“Though it’s disturbing that an individual who elevated and honored Nazi imagery and titles and joked about the Holocaust should receive a $1.52 million settlement, we know the City of Kent had limited options,” wrote Federation. “We believe they worked to create the best possible outcome by ensuring that Kammerzell does not return to his role as a law-enforcement officer.

“This is a step towards ensuring the safety and well-being of the Jewish community and of other groups who were made to feel targeted and unsafe through Kammerzell’s actions,” they emphasized. “In a time when incidents of hate against the Jewish people are higher than they’ve been in almost 45 years, we strongly urge the City of Kent to continue current efforts and create long-term plans to ensure addressing anti-Semitism is dealt with head-on.”