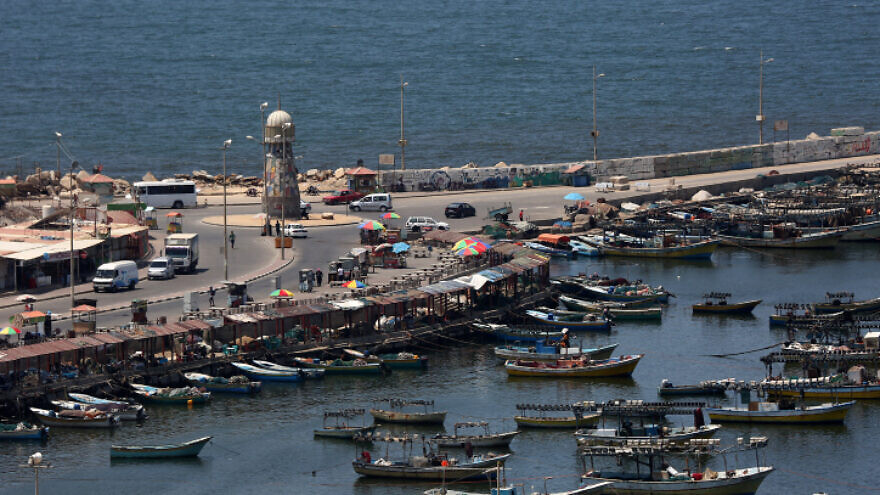 (September 30, 2021 / JNS) When Foreign Minister Yair Lapid recently floated his new two-stage plan for developing the Gaza Strip earlier this month, a clause in the plan sounded all too familiar to Asaf Ashar, an emeritus research professor at the National Ports and Waterways Institute USA with 40 years of worldwide experience in port planning.

According to Lapid’s plan, an artificial island would be created 4.5 kilometers off the Gazan shoreline, within the territorial waters of Gaza, and on it would be a new seaport linked to the Strip by a long bridge. The port would be under Israeli security control and used for imports and exports to boost Gaza’s failed economy.

The island idea has been suggested many times in recent years, including by former Transport Minister Israel Katz.

“Where would security inspections be conducted? On the narrow bridge connecting the island to the shore? Who will conduct the inspection, Israelis based in Gaza? International inspectors? Who will inspect ships calling there, Israel’s Navy? Can Israeli navy ships operate in Gaza waters?” asked Ashar.

But the biggest stumbling block to the island idea, according to Ashar, is its staggering cost. “Building a massive 8 square kilometer island in open sea could run up to around $10 billion and take 10 years considering the almost unsurmountable environmental hurdles,” he said. In contrast, he said, a south Gaza port—an idea Ashar has detailed in a proposed plan—could cost $200 to $250 million and could be constructed within two to three years.

The team studied several alternative plans for a Gaza port. As part of its activities, the team met with Israel’s National Security Council, the IDF’s Coordinator of Government Activities in the Territories, the commander of Kerem Shalom, former IDF chiefs of staff, Israel’s National Port Authority and others.

Reactions so far have been mixed, said Ashar, with some responding positively, while others ruling out the idea due to the seemingly permanent impasse of the Israeli-Gazan relations and the extremist Islamist ideology of Hamas.

Ashar was told repeatedly that the port idea would have to be dealt with as part of a final peace plan, but he chose not to give up.

“My idea is to find a practical plan that does not depend on a comprehensive political agreement with Hamas or the Palestinian Authority. Instead of starting at the top, let’s start at the bottom,” he said.

He insisted that any plan for a port must give priority to Israel’s ability to continue to inspect all incoming goods, particularly dual-use items that may appear innocuous, but which can and have been used for military-terrorist objectives, like chemicals for explosives and rocket fuel.

“This means that all checks are done by Israeli hands,” said Ashar. “International inspectors will not do the job for Israel. Previous experience with the European Union inspectors at Rafah Border Crossing proves this.

“Today, with some 1,000 trucks per day enter Gaza through Kerem Shalom, the border crossing terminal there is under constant aerial surveillance,” he continued, saying Israeli Defense Ministry inspectors “take apart all the trucks, ground all cargoes, open packages and thoroughly inspect their contents. The inspection is done in a series of large, open cells encircled with walls and security cameras. This cannot change.” 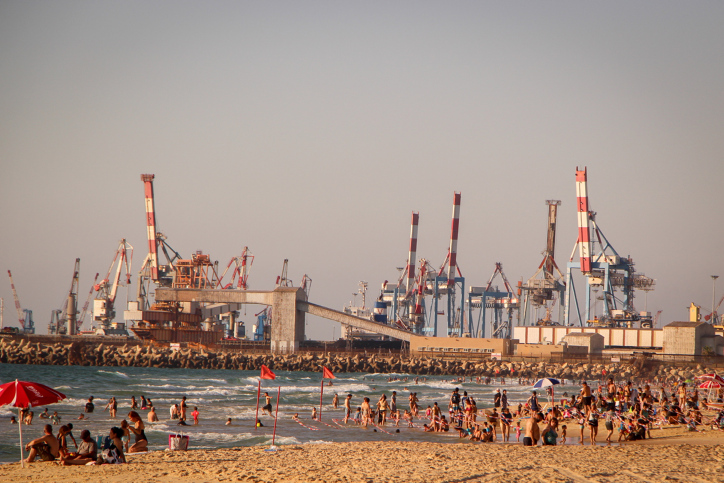 People enjoy the beach in the southern Israeli city of Ashdod, Aug. 2, 2020. Photo by Gershon Elinson/Flash90.

The Gaza port: An older story

Gaza has never had a commercial cargo port. Still, the idea of establishing a seaport there dates back decades.

For Palestinians, a port in Gaza is a key symbol and a critical engine for future economic development, said Ashar. However, with Hamas using every opportunity to smuggle materials for the production of rockets to threaten Israeli cities, the security issue is critical for Israel.

In the past, under a different reality, Israel repeatedly agreed and committed to supporting a Gaza port, such as in the 1993 Oslo Accord, the 1999 Sharm el-Sheikh Memorandum, and the 2005 Agreement on Movement and Access. 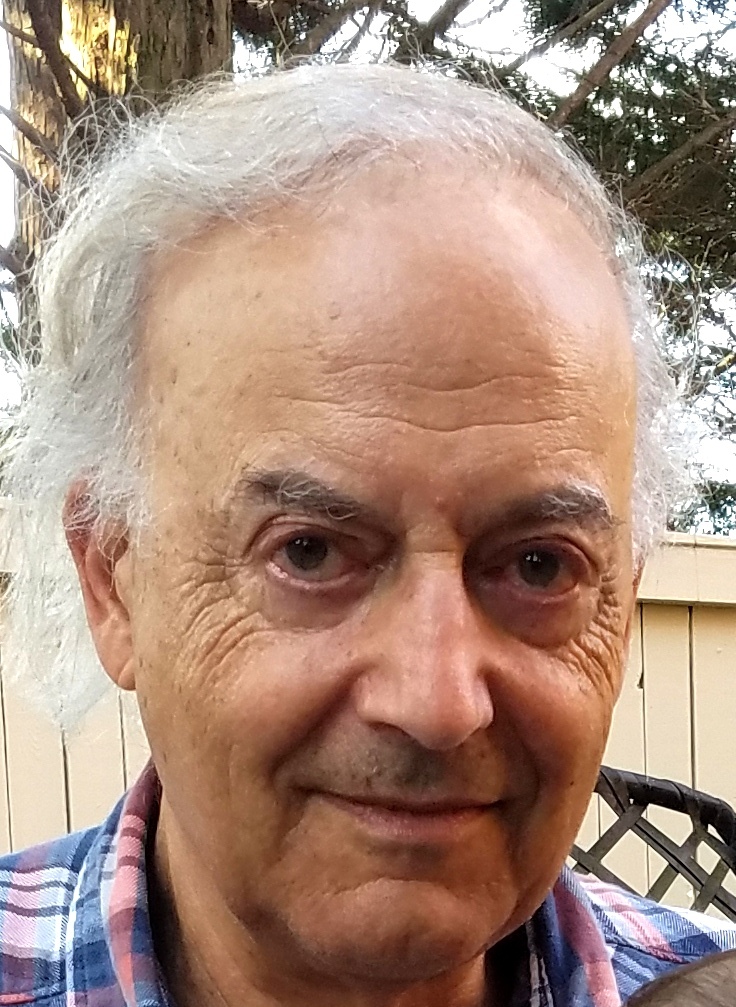 In the year 2000, when the P.A. was still ruling the Strip, Israel authorized the construction of such a port. French and Dutch port planners chose a site adjacent to Gaza City. The problem with the site: “To access it, one would have to bulldoze nearby neighborhoods, including parts of the Nuseirat Refugee Camp. Also, how do you store chemicals close to residential areas in light of the explosion in Beirut port?” asked Ashar. The project had an initial budget of $70 million, but it went nowhere, as the Second Intifada erupted three months later.

“The IDF sent three tanks to run over the buildings and equipment at the site, and that was the end of the port initiative,” he recalled.

Today, all shipments to Gaza, as well as the West Bank, arrive at Israeli ports, mostly the southern Port of Ashdod. Gaza-bound goods are trucked to Kerem Shalom Border Crossing, while those destined for the West Bank are sent to border crossings such as the Gilboa (Jalame) Crossing, which has been in recent headlines after being targeted by terrorist gunmen repeatedly.

The P.A.’s annual budget is heavily reliant on import taxes collected by Israel and transferred to the authority.

Gaza seaport: The other options

One idea that had been proposed in the past is to establish a dedicated Palestinian pier at Ashdod seaport for handling Gazan cargo.

“The problem is that trucks have to travel 90 kilometers from Ashdod to Kerem Shalom. Also, processing goods at Israeli ports results in double handling because trucks have to be handled again in Kerem Shalom. This makes it much more expensive for Gazan cargoes,” said Ashar.

“Then there is also the political issue; the Palestinians want their own port. The idea of a Gaza port is ultimately a political one, not an economic one. If we were not separate entities, there would be no need for it in light of the development of the two new ports in Haifa and Ashdod,” he added, referring to privately run ports built next to the two publicly operated seaports.

Another alternative is to construct a port at the northern border of the Strip on the Israeli side at Zikim beach and the nearby nature reserve area. But this site is small and environmentally sensitive, and there is no room to build an industrial zone next to a port, said Ashar.

In the past, Finance Minister and former Defense Minister Avigdor Liberman proposed the idea of a dedicated pier for Gaza at Cyprus’s Larnaca port, where Gazan cargo would be unloaded, inspected and loaded back onto smaller ships, sailing to Ashdod for inspection and then to the fishing port in Gaza City, which will be expanded. But “the fishing port is only 5 meters deep, sufficient for really small ships, and there is no room for storing and handling cargoes.

“The idea is a non-starter,” said Ashar.

According to Ashar’s plan, the Egyptian government would lease out a small coastline area in the northern Sinai adjacent to the Gaza border for the sea component (docks) of the port, connect it by road to the Kerem Shalom Crossing, where the land component (cargo storage) would be provided, turning it into a “dry” port.

The present inspection process would remain intact. The secured land corridor between the sea and land component would run along the Gazan-Egyptian border on the Egyptian side.

The new port would, according to the plan, be operated by the P.A., Hamas or a combination of the two. 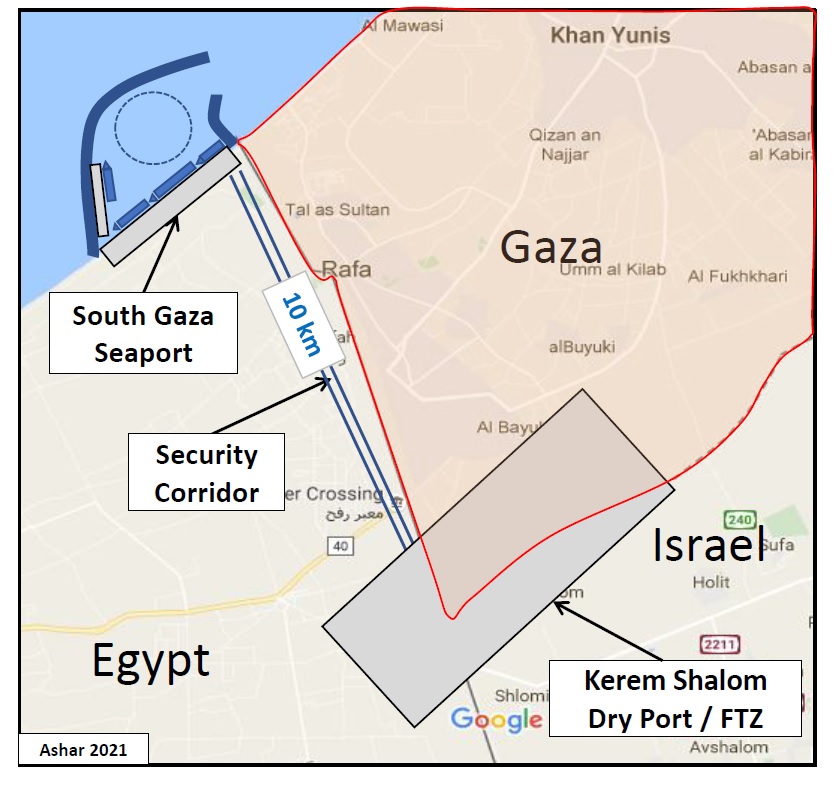 A map illustrating a proposal for a Gaza seaport in Egypt’s Sinai Peninsula. Credit: Courtesy.

According to Ashar, once the new port is established, Kerem Shalom could be expanded and transformed into a tri-state Gaza-Israel-Egypt foreign trade zone.

“Hamas already has a facility for handling goods on the Gazan side of Kerem Shalom. There is nothing stopping the setting up of a similar zone on the Egyptian side adjacent to Kerem Shalom. Altogether, the seaport and free-trade zone are intended to create jobs for both Gazans and Egyptians,” he stated.

Ashar envisioned the first facility to be built in the free-trade zone would be a refrigerated warehouse to enable Gazan farmers to export fresh produce via the new seaport.

“It seems that neither side should have reasons to oppose the south Gaza port plan,” he argued. “For Egypt, it will revive the northern Sinai. They only need to lease around two kilometers of uninhabited coastline.”

For Israel, it makes little difference whether the Gaza-bound cargo comes through Ashdod or a south Gaza port since cargo security inspections remain at Kerem Shalom, he added.

Egypt would be in charge of ensuring naval security. Although the port would be declared to be a Palestinian autonomous site, it would remain an Egyptian port for security-related purposes. For the Palestinians, while they would not get a fully sovereign port, said Ashar, “the autonomous port provides exactly the same port services.”

“The real beauty of this plan is that it can be implemented despite the current—and most likely, the future—political stalemate on core issues,” he added.