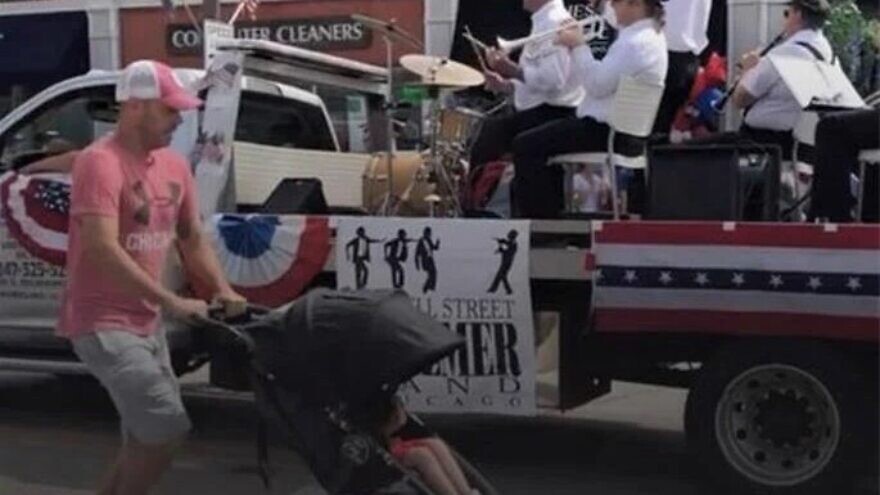 A father rushes his child to safety as gunshots are fired at a Fourth of July parade in Highland Park, Ill., on July 4, 2022. Credit: @LynnSweet/Chabad.org News.
Republish this article
751 WORDS
Spread the word.
Help JNS grow!
Share now:

(July 5, 2022 / Chabad.org/News) CHICAGO—As the Fourth of July parade in Highland Park, Ill., commenced heading down Central Avenue in one of Chicago’s most Jewish suburbs, gunshots rang out at approximately 10:19 a.m. CST from the rooftop of Gearhead Outfitters on Central Avenue. Thousands of panicked revelers who had been enjoying the parade chaotically rushed for safety with parents frantically shielding their children. It is unclear how many were struck; initial reports indicate that six people have been killed—that number had changed to seven as of Tuesday afternoon—and at least 24 were transported to local hospitals.

After an hours-long manhunt, authorities arrested Robert “Bobby” Crimo III, 21, of Highwood, Ill., who they said used a high-powered rifle in the attack.

Two members of the Jewish community were reported among the fatalities. Jackie Sundheim, a preschool teacher at Congregation Israel, in nearby Glencoe was killed in the attack. A message from the congregation said her “work, kindness and warmth touched us all” and that she guided “innumerable among us through life’s moments of joy and sorrow, all of this with tireless dedication.”

A second victim, Nicholas Toledo, 78, was a father of eight and a grandfather who had come to the United States two months ago to visit relatives for the first time in years after being kept apart due to COVID.

The annual Fourth of July celebration, hosted by the city of Highland Park, features floats (including Chabad’s giant menorah), marching bands and other special entertainment, and draws a crowd of thousands.

‘The community is in absolute shock’

Michla Schanowitz, co-director of North Suburban Lubavitch Chabad—Central Avenue Synagogue, was outside her Chabad center at the heart of the parade’s route, just four blocks away from the shooting when she saw crowds running towards her. Chabad had a table set up outside the center offering passersby a chance to put on tefillin or take a Shabbat candle kit, staffed by four young rabbinical students from Chabad’s Yeshivas Ohr Eliyahu Lubavitch Mesivta of Chicago.

“The parade had barely started. All of a sudden, I see everyone running towards us,” says Schanowitz. She began rushing people to safety inside her Chabad center immediately. “Come inside, it’s a synagogue,” she shouted to the stunned passersby.

Schanowitz reports that her student volunteers were all safe and accounted for.

“The community is in absolute shock,” her husband, Rabbi Yosef Schanowitz, told Chabad.org from the Emergency Department at the Highland Park Hospital where he was visiting victims of the attack. “People should pray for Highland park and do an extra act of goodness for us,” he said.

The Schanowitzes have served the Highland Park area Jewish community since 1980 when they established Chabad in the area. Chabad in Highland Park’s base of operations is on Central Avenue, the main thoroughfare for the city where the parade was held today, and a few blocks west of where the attack took place. In addition to the Central Avenue Synagogue, Chabad in Highland Park, with the assistance of the Skolnick family, runs a popular Hebrew-school program for children, and a plethora of adult and children’s educational programming. 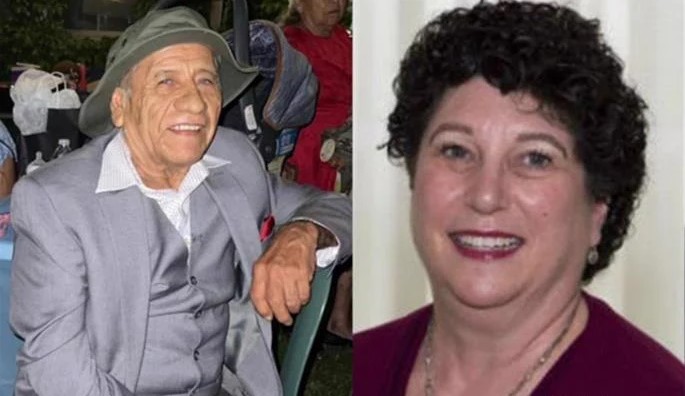 Nicholas Toledo, 78, a father of eight and a grandfather, and Jacki Sundheim, a preschool teacher, were killed in the shooting at a Fourth of July parade in Highland Park, Ill., on July 4, 2022. Credit: Chabad.org News.

The July 4th parade annually has a strong Jewish presence, with Chabad running a float complete with a giant menorah and providing other Jewish experiences for participants.

“Our kids were at the parade, near the shul, with a lot of others,” says local resident Dovid Weissman. “As soon as they heard there was a shooting, they ran home. Right now, we are all sheltering at home, waiting for the shooter to be found. People have been posting on our community WhatsApp group, sharing word that they are OK.”

As word of the attack in Highland Park spread, parades in neighboring suburbs were canceled as well. In Skokie, the parade was called off just before Lubavitch Chabad of Skokie’s Mitzvah Tank was about to roll down the parade route, festooned with a large American flag and stocked with thousands of magnets encouraging goodness and kindness.

“We understand that prudence dictated that the parade be called off,” says Rabbi Yochanan Posner of Lubavitch Chabad of Skokie. “But we will persist in spreading the message of gratitude to the United States of America for giving us freedom and being conducive to a society which values goodness and kindness. So, while there is tragically no formal parade today, our ‘parade’ of a single vehicle will be traveling the streets of Skokie and proclaiming that message.”