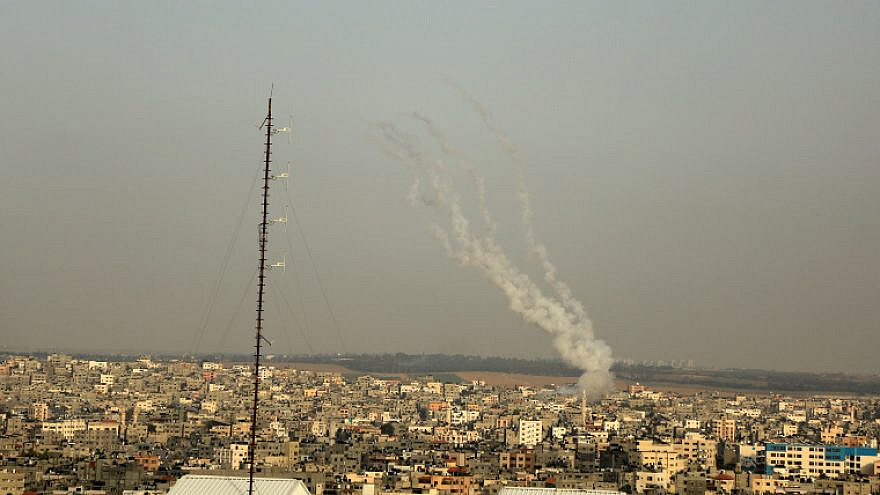 Smoke seen as a rocket is launched from Rafah, in the southern Gaza Strip, towards Israel on May 10, 2021. Photo by Atia Mohammed/Flash90.
Republish this article
865 WORDS
Spread the word.
Help JNS grow!
Share now:

(May 10, 2021 / JNS) Hamas’s rocket assault on Jerusalem and southern Israel is a result of a dangerous and destructive decision by its leadership to gamble heavily in its power struggle with Fatah, and to capitalize on what it sees as Israeli political chaos.

Ever since Palestinian Authority chief Mahmoud Abbas shut the door to a Hamas takeover of the West Bank via elections, which he canceled late last month and which Hamas would most likely have won, the terror group ensconced in the Gaza Strip has identified a new opportunity to undermine the already weakened rule of the P.A. The path to Ramallah, Hamas found, runs through Jerusalem.

Positioning itself as the “true defender” of Jerusalem and the Al-Aqsa mosque is staple Hamas propaganda, and it has done everything it could in recent days to fan the flames of violence in Israel’s capital, spreading inflammatory Islamist rhetoric and boosting its influence on the Palestinian street at the expense of Fatah, which it depicts as inept.

But with Ramadan—always a sensitive period in Jerusalem—coming to an end and Israel working to de-escalate the situation, Hamas was not prepared to let the momentum slow down, for its goal is to set fire to the West Bank as well and use the violence to consolidate its position there.

The multiple shooting terror attacks on Israelis conducted by Palestinians in the West Bank in recent days are just the types of incidents that Hamas is agitating to generate through its rockets.

Israel’s defense establishment and government have taken several steps to stabilize the situation in recent days, including minimizing Israeli responses to Gazan rocket fire and attempting to let Israel Police contain the Jerusalem disturbances. A decision by the Israeli Supreme Court to postpone an explosive legal ruling on the fate of homes in Jerusalem’s Sheikh Jarrah neighborhood formed another barrel of water thrown at the flames in Jerusalem. 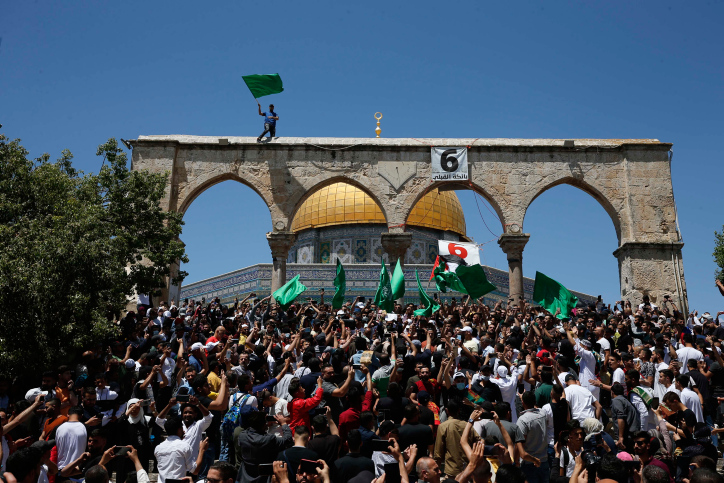 Palestinians gather on the Temple Mount, some holding Hamas flags, on May 7, 2021. Photo by Jamal Awad/Flash90.

Because of such measures, Hamas decided to up the ante by directly dousing the flames with oil, launching an entirely unprovoked projectile assault on Jerusalem and southern Israel. Other terror factions from Gaza joined in, with Palestinian Islamic Jihad firing an anti-tank missile at a civilian vehicle near Sderot. Miraculously, the driver who stood nearby narrowly escaped death.

Israel is now determined to make it clear to Hamas’s leadership—Yahya Sinwar, who is head of Hamas in Gaza; Muhammed Deif, who is the head of Hamas’s military wing, and who may have had a hand in pushing Hamas into its latest gamble; and the organization’s overseas establishment—that the decision to escalate was a very serious mistake.

“We assess that Hamas will get the message and understand they are the ones facing very severe consequences,” IDF International IDF Spokesperson, Lt. Col. Jonathan Conricus, told reporters by conference call on Monday.

“What we’re seeing since 6 p.m. is a blatant attack by Hamas against Israel,” he added. “We see this is a very serious assault on Israel by Hamas that will not go unanswered.”

Conricus confirmed that multiple terror organizations are taking part in the attacks, but said that “from our perspective, there is one: Hamas. It is responsible, and it will bear the consequences. It will pay a heavy price for attacks on Israeli sovereignty and endangering Israeli civilians.”

‘We have additional targets at hand’

Looking ahead, multiple battle days are likely to follow before it becomes clear where this confrontation is going. The Israel Defense Forces enter this fight well-prepared. It has reinforced its Southern Command with infantry, special forces and additional capabilities.

In recent years, the Israeli Air Force, Military Intelligence and Southern Command have worked to improve their ability to gather large quantities of intelligence on enemy targets and to convert that information into precision strikes.

Those are just the kinds of capabilities that the IDF requires against an asymmetrical terror army like Hamas, which uses human shielding and Gaza’s crowded neighborhoods as the backdrop to attack Israeli civilians. Hamas’s targets appear and vanish quickly—time-sensitive targets—meaning that detecting and striking them is key to be effective in this campaign.

Thousands of rockets have been built by Hamas and Palestinian Islamic Jihad, and embedded in residential areas in Gaza, placing civilians at risk. A network of combat tunnels crisscrosses underneath Gaza for the movement of Hamas’s operatives and weapons.

The IDF already confirmed that it had struck a Hamas commander in an airstrike on Monday and indicated that more was to come. “We have additional targets at hand, and the green light to continue to strike those and other types for military targets,” said Conricus.

It remains unknown how long this new conflict will last, but the IDF is gearing up for a potentially longer campaign.

Hamas and Palestinian Islamic Jihad can also fire rockets far north of Tel Aviv. Until they indicate through mediators that they have internalized the error of their gamble, the new escalation is likely to rage on.