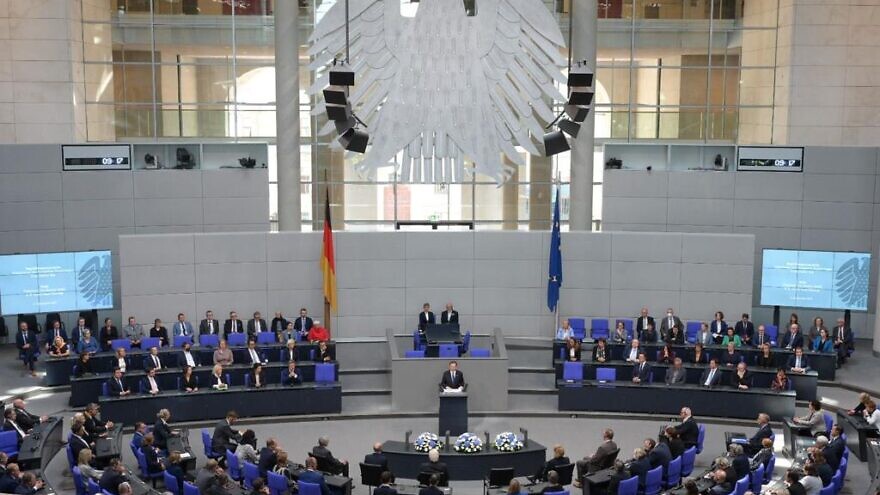 (September 6, 2022 / JNS) Israeli President Isaac Herzog on Tuesday called on the “family of nations” to stop Iran from acquiring nuclear weapons, saying that the world must not back down.

Herzog is on a three-day official visit to Germany. On Monday he attended the memorial ceremony marking the 50th anniversary of the murder of 11 Israelis by Palestinian terrorists at the 1972 Munich Olympics. In attendance in Berlin on Tuesday were, among other high-ranking officials and dignitaries, German President Frank-Walter Steinmeier and Chancellor Olaf Scholz.

The international community “must stand on the right side of history, set clear conditions, impose fierce and essential sanctions, create an impermeable buffer between Iran and nuclear capabilities—it must act, and not back down,” he said.

While Israel would defend itself “by any means necessary,” he continued, “I call on the whole world: Don’t stand idly by.”

The Israeli president began his address by reciting the Yizkor, or remembrance, prayer, saying: “May God remember the souls of our brethren, children of Israel, victims of the Holocaust and its heroes, the souls of the six million of Israel who were killed, murdered, strangled and buried alive, and the holy communities destroyed for the sanctification of the Name.”

Germany, he noted, had for centuries been a “glorious” home for Jews, who “flourished in every aspect: religion, culture, intellect, statecraft, science and so much more.” However, he continued, “And this is no secret, this land—Germany—was home to the greatest atrocities ever inflicted on the Jewish people and humanity at large, throughout the ages.”

Never in human history, he continued, “was a state responsible, as Nazi Germany was responsible, for the loss of all semblance of humanity, for the erasure of all mercy, for the pursuit of the worldwide obliteration, with such awful cruelty, of an entire people.”

He expressed pride, however, in Israel’s current relationship with Germany, which he described as a “bold alliance.”

“I am completely confident that our shared values, and the deep friendship between our countries, will contribute toward reinforcing our partnership further along the journey that Israel and Germany are making together, side by side, hand in hand, toward a prosperous future filled with hope,” he said.

The modern State of Israel, he continued, constituted a “wonder” of revival and prosperity, a country that has made in a short period of time momentous contributions to the world in the realms of culture, medicine, academia, science and many others.

Jerusalem has not only established strong partnerships with European nations, but has  become a powerful engine of pan-regional partnership in the Middle East, he said.

“The Abraham Accords, joining earlier peace accords and endeavors for normalization, dialogue and rapprochement, have made Israel a prime mover of close neighborly relations, of prosperity, and of unprecedented growth in our region,” he added.

“We have never feared criticism; we have never prevented criticism. But we shall always insist on one thing from our critics: to stick to the truth. Israel’s outreach for peace is genuine; our warm and deep relations with our neighbors are genuine, and so is the great value that they are bringing [to] our whole region and the world, this is genuine,” he continued.