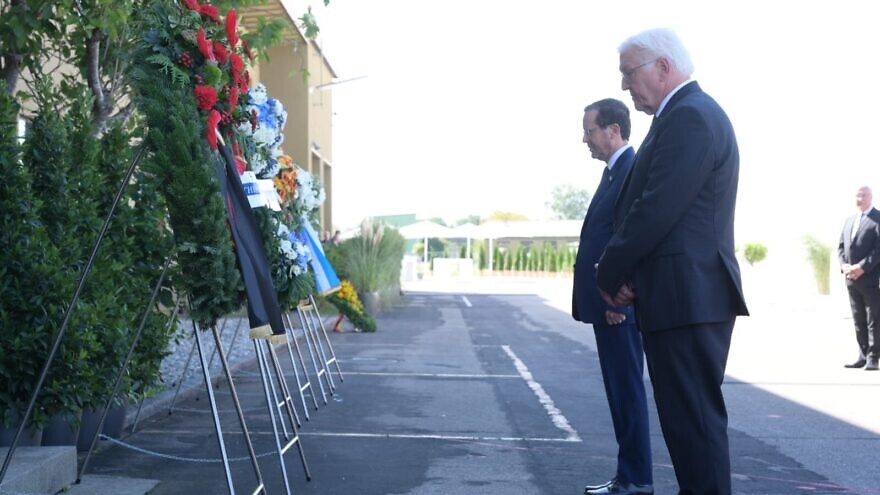 (September 5, 2022 / JNS) Below is the full text of the speech delivered by Israeli President Isaac Herzog at the 50th anniversary commemoration of the massacre of 11 Israelis at the 1972 Munich Olympics:

Dear families of the murdered athletes; survivors of the Munich massacre; Your Excellency, my friend, the President of Germany, Frank-Walter Steinmeier, thank you from the bottom of my heart for your brave and historic speech, which touched everyone’s hearts.

Your Excellencies, the Minister-President of Bavaria and Mayor of Munich; leaders and government officials from Germany and Israel; representatives and directors of the national Olympic committees; Jewish community leaders in Germany; loved ones, friends, families, and all those who cherish the memories of the murdered athletes, ladies and gentlemen.

“Why must my pain be endless, my wound incurable, resistant to healing?” So asks the Prophet Jeremiah (Jeremiah 15:18), and so we ask today. Even fifty years after the horrific murder of the eleven Israeli athletes here and in the Munich Olympic village, with inconceivable cruelty and in cold blood—the pain is eternal. That awful event remains a wound, resistant to healing.

All those of us who remember those dark and endless hours in that bitter September of 1972 carry in our hearts the same scar, the same moments in which we followed with excruciating anxiety and boundless concern the conflicting reports coming in every few hours from the Olympic village in Munich. We struggled to fathom that Jewish and Israeli athletes, judges, and coaches were being held by terrorists on German soil. We prayed so hard for a different ending. But our hearts were pained and broken; our hopes dashed.

Within a day, we received the most agonizing of news: ‘None survived.’ Although I was only a young boy, I shall never forget that awful morning, driving with my father to school and in the car hearing together the horrific news, and we stopped breathing. I shall never forget the tears that welled up in our eyes, the sense of total shock, the grief, the gloom, and the angst that engulfed an entire country when the so-called ‘Cheerful Games’ were instantly transformed into the darkest nadir in the history of world sports and in the annals of the Olympics.

They were brutally murdered in cold blood by a Palestinian terror organization just because they were Jews; just because they were Israelis. This brutal and barbaric massacre, which ended the lives of eleven Israeli athletes and one German policeman, was a momentous human tragedy in which the values of morality and justice were trampled; human dignity was erased; all semblance of humanity lost. It was the moment the Olympic torch was snuffed.

For us, as a people and as a country, this massacre has always been a national disaster. It desecrated the unifying and cohesive sanctity of the Olympics, the ultimate symbol of sports, and smeared its flag with blood. The Olympic flag, with its five rings, would never again be what it was before.

For many decades, as President Steinmeier said, Germany and the International Olympic Committee avoided commemorating the eleven athletes. For the families of the victims, their pain and sorrow for their loved ones’ loss, their agony and tears, and the traumatic scars that the survivors bore for years, were compounded by their anguish about this indifference and cold shoulder. These were years in which it seemed like one simple truth had been forgotten: this was not a uniquely Jewish and Israeli tragedy—this was a global tragedy! A tragedy that must be recalled and commemorated at every Olympic Games; a tragedy whose lessons must be taught, from generation to generation. A tragedy that underscores for us, time and again, that sports have no more polar opposite than terror, and terror has no more polar opposite than the spirit of sportsmanship.

In this sense, but not only, Germany’s decision in recent days, for which I express thank you again my friend President Frank-Walter Steinmeier, for your tremendous efforts, and of course also the Federal Government, the Bavarian State Government, and the Municipality of Munich for making this decision. The decision to take responsibility for the failures surrounding and following the massacre, to allow for an objective and rigorous inquiry, and to compensate the victims’ families is part of that sanctification of the good and triumph over evil. It represents, half a century later, an important step of morality and justice for the victims, for the families, and for history itself.

Ladies and gentlemen, there is a distinctive word in the Hebrew language for one who was murdered or killed in a disaster. Such a person is a halal. This word, halal, is also the Hebrew word for an empty space—a void. Each and every one of the eleven athletes was a world unto himself. To his family. To his loved ones. To his people. Each and every one left behind a void, a halal, that will never be filled.

There are no words to comfort you, dear and beloved bereaved families. Your courage, your commitment to life, and your future generations, some of whom are here with us today, committed to the imperative of memory and the imperative of life and meaning—these are all an example for all of us, and they are a proud and glorious memorial to the murdered athletes.

May the memory of the victims, the halalim, of the Munich Olympics massacre be preserved in our hearts forever.