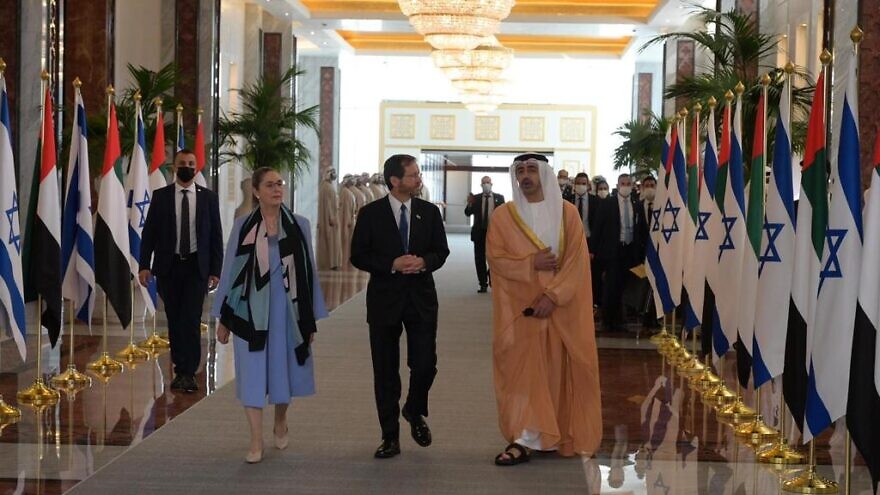 (May 15, 2022 / JNS) Israeli President Isaac Herzog flew to the United Arab Emirates on Sunday to convey his condolences to the new UAE president, Sheikh Mohammed bin Zayed Al Nahyan, to his family and the Emirati people on the death of the country’s former ruler, Sheikh Khalifa bin Zayed Al Nahyan.

Sheikh Khalifa was the half-brother of Mohammed, often known as MBZ, who served as the UAE’s crown prince.

Sheikh Khalifa, a pro-Western modernizer who had aligned the Gulf Arab state closer to the United States and its allies, died on Friday at age 73, according to Reuters.

“The Ministry of Presidential Affairs announced the death of Khalifa, who was also the ruler of the UAE’s richest emirate, Abu Dhabi, but gave no details,” said the report.

Khalifa has rarely been seen in public since suffering a stroke in 2014, according to the report.

“The UAE has lost its righteous son and leader of the ‘empowerment phase’ and guardian of its blessed journey,” Sheikh Mohammed bin Zayed said on Twitter, praising Khalifa’s wisdom and generosity.

Under Khalifa’s term as president, the UAE and Israel normalized relations in the historic Abraham Accords, which were signed in Washington on Sept. 15, 2020.