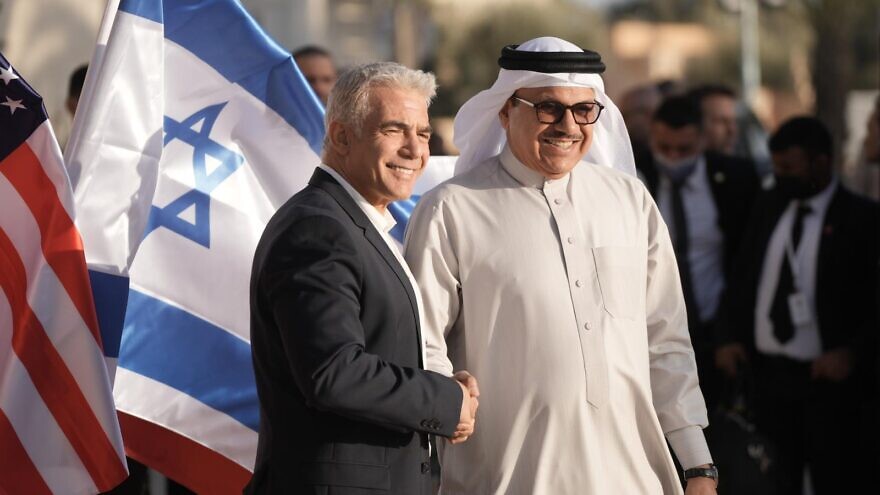 (March 27, 2022 / JNS) In a scene that was unimaginable over the first decades of Israel’s existence, six foreign ministers, including four from Arab states (Egypt, Morocco, Bahrain and the United Arab Emirates), the other two from the U.S. and Israel, arrived in the Jewish State Sunday for a historic two-day summit. The summit is taking place at Kibbutz Sde Boker in Israel’s southern Negev Desert, where Israel’s first prime minister, David Ben-Gurion, spent his final years along with his wife, Paula.

At the top of the agenda is the pending nuclear deal with Iran, which Israel predicts could be signed this week. The deal currently being negotiated by world powers in Vienna would provide the Islamic Republic of Iran with billions of dollars in sanctions relief. Analysts have noted that the deal would provide Iran with a glide path to nuclear weapons at the expiration of the nuclear deal’s terms in just two-and-a-half years.

Israel and its Arab allies view the meeting as a chance to air their concerns to Blinken, who is championing the deal.

“They see the upcoming agreement with Iran doesn’t serve their interests. And they are worried,” Yoel Guzansky, a senior research fellow at the Institute for National Security Studies (INSS), told JNS. “There is tension between some Arab capitals and the U.S. regarding all kinds of issues that they find irritating about U.S. Middle East policy. They see the U.S. as distancing itself from the region.”

Guzansky explained that in recent weeks, the Saudis and Emiratis reportedly declined to take calls from U.S. President Joe Biden as he has attempted to build international support for Ukraine and lobby the Gulf states to produce more oil to contain surging prices. “They didn’t play along because the Saudis and Emiratis have had a full stomach with the Americans,” he said.

The Arab states will likely come with a list of demands for Blinken, including security assurances and defense materials, said Guzansky, noting that just last Friday, Riyadh was hit by a missile strike from Iranian-backed Houthi rebels in neighboring Yemen.

In one of its first foreign-policy acts, the Biden administration removed the Houthis from the Foreign Terrorist Organization and Specially Designated Global Terrorist lists. Placing the Houthis back on the U.S. terror list will be a key Arab demand, said Guzansky, along with keeping the terror designation on Iran’s Islamic Revolutionary Guard Corps (IRGC). The United States has suggested it may give into an Iranian demand to remove the IRGC from the designated terrorist list.

Guzansky expects that the United States and Arab states will meet each other halfway with America providing security assurances and the Arab states agreeing to produce more oil.

‘An emerging alliance of strong states’

Oil is the main leverage the Arab states have, and the foreign ministers will make it clear to Blinken that they’re willing to use it—in other words, not to cooperate in boosting production, said Mordechai Kedar, a lecturer at Bar-Ilan University and a scholar in Arabic culture.

“The Middle East is not something which you push aside in order to deal with other problems,” Kedar told JNS. “Blinken will find a united front before him. It’s going to be a very tense meeting.”

Blinken may become “much more aware of the severity of the problem as a result of this summit. Until now, the U.S. has taken these countries—the Emirates, Bahrain, ourselves [Israel], the Saudis and Egypt—for granted,” said Kedar.

There’s a cultural aspect, too. “In the Middle East, you don’t betray friends. If you do, you’re going to be dismissed, even a superpower like the United States,” he said.

Hillel Frisch, an expert on the Arab world at the Jerusalem Institute for Strategy and Security (JISS), told JNS it is important not to let Iran and the looming security issues overwhelm the positive aspects of the summit.

The fact that Arab leaders are meeting at a kibbutz in the Negev is “an Israeli dream come true. Even 10 to 15 years ago, it would have been considered prophetic,” said Frisch.

“Most of the conference is a photo-op event, but a meaningful one,” he added. “It shows there’s an emerging alliance of strong states in the region that are going to try and cope with the Iranian problem.”

He noted that because Morocco is less concerned about Iran, given its geographical distance, its presence at the summit is important: “It means that Morocco is interested in cementing the regional relationship with Israel.”

Frisch pointed out  that Egypt’s presence sends a message to Turkish President Recep Tayyip Erdoğan that while Israel views its improving relations with Turkey as important, they’re not as important as those of its immediate neighbor and first peace partner, Egypt.

The summit also puts the end to the threat of the “Arab street,” he said, a term connoting the theory that Arab populations would rise up against any government that dared make peace with Israel. “We’re witnessing that the Arab street is a crumbling facade.”