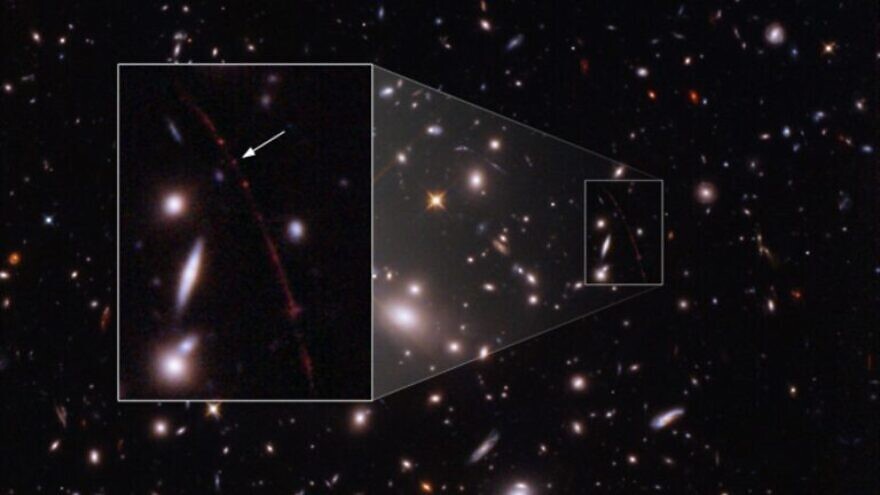 (April 4, 2022 / Israel21c) The farthest individual star ever seen was recently detected by the Hubble Space Telescope in a collaboration that included researchers from Ben-Gurion University of the Negev.

The newly detected star, dubbed “Earendel” (“morning star” in Old English), is estimated to be at least 50 times the mass of the sun and millions of times brighter, rivaling the most massive stars known.

Earendel is so far away that its light has taken 12.9 billion years to reach Earth, appearing to us as it did when the universe was only 7% of its current age, at a time that astronomers refer to as redshift 6.2. (Redshift refers to the fact that as the universe expands, light from distant objects is shifted to longer, redder wavelengths as it travels toward us.)

“We almost didn’t believe it at first, it was so much farther than the previous most-distant, highest redshift star,” said astronomer Brian Welch of Johns Hopkins University in Baltimore, lead author of the paper describing the discovery, published in the journal Nature.

The previous single-star record holder; detected by Hubble in 2018, existed when the universe was about 4 billion years old, or 30% of its current age, at redshift 1.5.

Professor Adi Zitrin from Ben-Gurion University, one of the lead researchers of the study, explained that a cosmic alignment of a massive cluster of galaxies between us and the distant star magnified it by at least a factor of a few thousand. Massive bodies bend spacetime such that they effectively create a lens in the sky.

“The lensing phenomenon opens a door to learn about dark matter and distant galaxies,” said Zitrin.

The discovery also “opens a door to learn about stars in the early universe, where we have little information on their physical characteristics and their contribution to the early ionization of hydrogen throughout the universe,” he added.