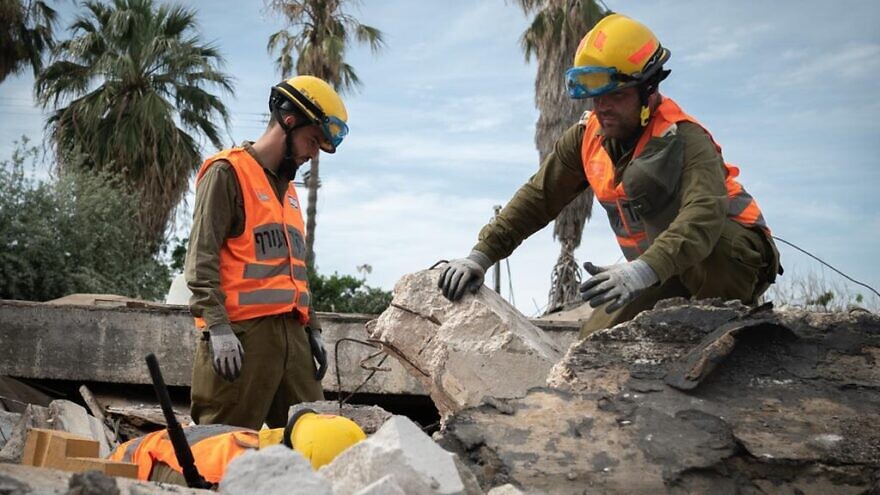 (June 22, 2022 / JNS) Earlier this month, the Israel Defense Forces completed a month-long war drill, dubbed “Chariots of Fire,” which drilled scenarios much greater in scope and severity than the May 2021 conflict between Israel and Hamas. In that drill, the IDF Home Front Command, which is responsible for protecting the country’s civilian sphere, worked closely with local councils and government ministries, testing its own ability to respond to extreme war scenarios.

Speaking to JNS, a military official said that 43 Israeli local councils took an active role in the drill, practicing emergencies. Fires, mass-casualty incidents caused by rocket attacks, evacuations, dealing with wreckage sites, water shortages and the channeling of civilians to absorption centers after their homes were “destroyed” by missiles were all some of the scenarios featured in the exercises. They provide a glimpse into the challenges that Israel’s soft underbelly—its home front—can expect to face in the event of a full-scale war between Israel and Hezbollah, Iran, Hamas and other affiliated radical actors.

“Every week, we held a drill with other local councils, and practiced their ability to continue to function,” said the source.

Thirty rocket sirens went off during the exercises as civilians in certain areas practiced rushing to safety and waiting for 10 minutes in safe spaces, including in Tel Aviv and other cities.

All of the Home Front Command’s districts practiced projectile attacks, calling up the command’s conscripted and reserve search-and-rescue battalions, according to the source. A mock wreckage site was set up in Akko with real ruins of a building setting the scene for a missile strike.

One of the key goals of the exercise was testing the ability of the Home Front Command to generate a national situation picture of real-time events, including “heat maps” showing where assistance was most urgently needed, as well as what the source described as “gaps” in the economy. This data would allow the Home Front Command to prioritize local councils according to the urgency of their needs. It also practiced using its own, upgraded command-and-control system in this context.

In addition, said the source, the command was charged with getting information out to the public. Channels of communications were activated to explain to civilians where safe areas are located and which essential workers can continue to go to their workplaces during an emergency.

“The Home Front Command is in charge of telling civilians what to do and not to do during emergencies,” said the source. “This is a well-oiled machine.”

“Operationally, we deployed mobile shelters during the drill. This is a strong ‘muscle’ that we have, and we routinely deploy these in areas that border Gaza when necessary,” said the official. “Whether in northern or southern escalations, we rapidly send vehicles, levers and engineers to deliver the mobile shelters.”

During any future war, hospitals will play a critical role in maintaining the home front’s resilience. The Home Front Command used the war drill to practice evacuating the wounded to northern hospitals and ensuring that they can continue to function under fire.

One of the most disturbing potential scenarios—a rocket strike on a site containing ammonium—was practiced as well. “How do we provide solutions to civilians regarding production, and what do we tell them on how to act? We practiced this, and deployed a team to end the incident and return things to routine,” said the source.

‘A range of threats all the time’

During the exercise, the Home Front Command received a surprise inspection from IDF Chief of Staff, Lt. Gen. Aviv Kochavi.

In any real emergency, the source said, the Home Front Command will be fully coordinated with the Israel Police, Israel Fire Service and Magen David Adom paramedics, including through integrated command centers and field headquarters.

“We will all sit around the same table to provide optimal solutions,” said the source.

This includes being able to observe the command-and-control networks of emergency civilian responders.

“Israel has a range of threats that it has to deal with all of the time. The Home Front Command and local councils practiced dynamic flexibility throughout the past month, and we are learning lessons,” said the official. “This principally increases our readiness. Training together daily for emergencies creates a common language and prepares us better.”