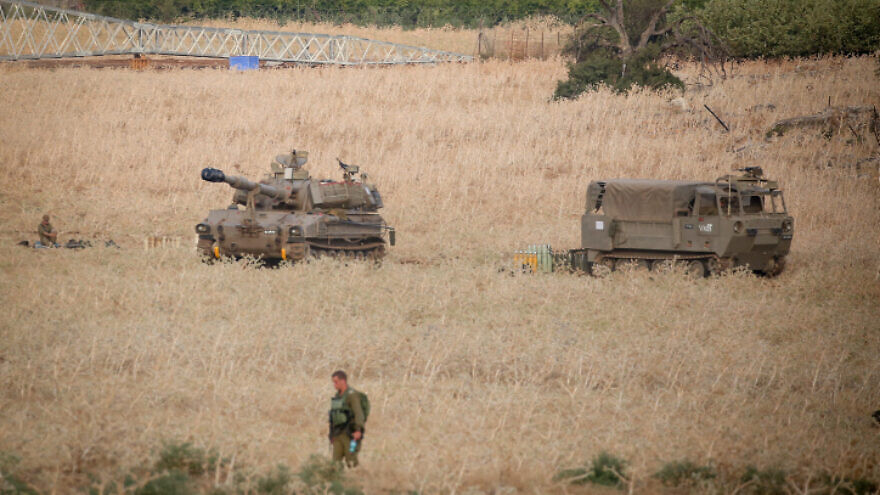 Israeli forces near the border between Israel and Lebanon in the Golan Heights on July 27, 2020. Photo by David Cohen/Flash90.
Spread the word.
Help JNS grow!
Share now:

(August 3, 2020 / JNS) The Israel Defense Forces thwarted an attempt by terrorists on Sunday night to plant explosives along the border with Syria in the southern Golan Heights.

“A short while ago, an IDF force thwarted an attempt to plant explosives on the Syrian border,” said the military in a statement. “Special forces carrying out an ambush near a military post in the southern Golan Heights identified a squad of several terrorists planting explosives near the border fence. An IDF force and IDF aircraft fired on the four-man squad simultaneously, hitting them.”

No Israeli casualties were reported, according to the military.

“IDF Northern Command forces are on high alert for any scenario. The IDF considers the Syrian regime responsible for any action taken in its territory and will not allow any violation of the sovereignty of the State of Israel,” the statement continued.

While it remains unclear who sent the terrorists, Israel’s Channel 12 reported that according to Syrian media reports, the cell was operating on behalf of an Iranian militia.

Also on Sunday, Hamas fired a rocket at the Israeli town of Sderot near the Gaza Strip. The rocket was intercepted by Israel’s Iron Dome air-defense system. There were no casualties in the incident, but a vehicle was damaged by shrapnel.

In response, the Israel Air Force attacked Hamas targets in Gaza, including “underground infrastructure” and a concrete production facility used in the construction of such infrastructure, according to the military.

The incidents come amid ongoing tensions on the northern border in recent days.

Last week, a Hezbollah squad infiltrated into Israeli territory from Lebanon in the Mount Dov Area and attempted to attack an IDF post. Israeli forces opened fire on the cell, which escaped back into Lebanese territory. There were no Israeli casualties.

A day later, several suspicious figures were identified near the border fence with Lebanon in the Western Galilee region, but an IDF investigation found no intrusion into Israeli territory.