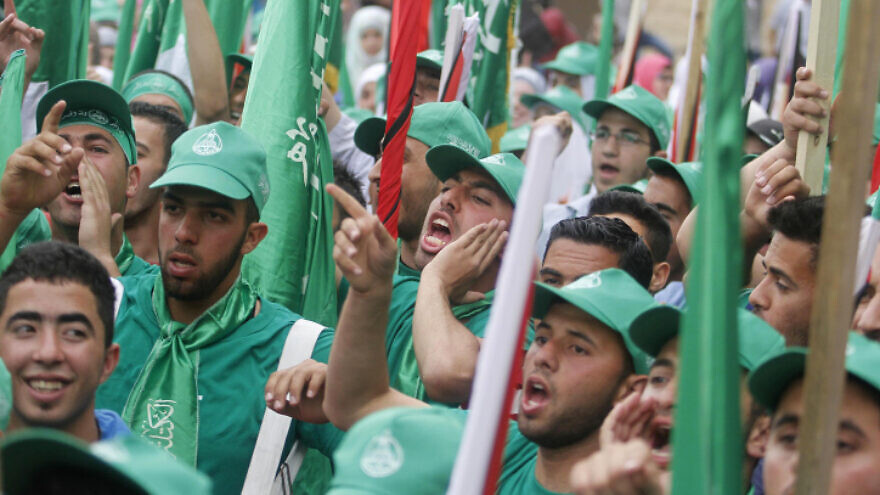 Hamas supporters attend a rally prior to the Student Council elections at Birzeit University, on the outskirts of Ramallah on May 6, 2014. Photo by Issam Rimawi/Flash90.
Spread the word.
Help JNS grow!
Share now:

(November 24, 2020 / Israel Hayom) Five students at Birzeit University near Ramallah have been arrested for their role in a Hamas money transfer scheme in a joint operation of the Israel Defense Forces and Shin Bet security agency operation, it was cleared for publication on Monday.

The students maintained contact with senior Hamas officials based in Turkey for the purpose of transferring funds through the Gaza Strip to Judea and Samaria.

The transfer method worked as follows: One of the students would submit a funding request for kutla (Islamic student group) activities, Hamas leaders in Turkey would approve the request and instruct Hamas headquarters in Gaza to transfer the funds. The money would be transferred via credit cards by individuals who had entered Israel for medical treatment. The students would then withdraw the funds at ATM machines across Ramallah.

Additionally, some of the students also confessed that they had agreed to carry out shooting attacks on Israeli settlers and IDF troops in the area.

According to a senior IDF official, “Hamas headquarters in Turkey and the Gaza Strip exploit students who study on their families’ dime and harms them. The students are involved in terrorist activity, are arrested, and don’t finish their studies, thus hurting their families.”

According to the official, “Joining a kutla [an Islamic student group] means joining Hamas. Birzeit University is the home of Hamas’s student group in Judea and Samaria. Essentially, under the guise of academic freedom, the university’s directorship permits the dissemination of incitement and encouragement for terror, alongside the recruitment of terrorists within the university’s walls. The Shin Bet and IDF will continue working to foil this activity, which includes transferring terrorist funds.”