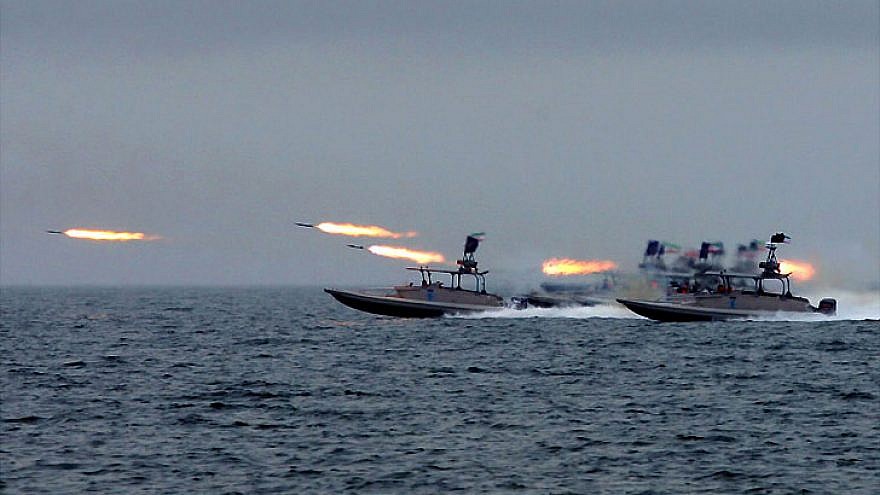 One of the various types of fast-attack craft used by Iran's Islamic Revolutionary Guard Corps, seen here taking part in maneuvers in the general area of the Strait of Hormuz in the Persian Gulf, in February 2015. Credit: Sayyed Shahab-o-Din Vajedi via Wikimedia Commons.
Spread the word.
Help JNS grow!
Share now:

(May 11, 2020 / JNS) An Iranian warship accidentally struck another with a missile during a training exercise, killing 19 and wounding 15 others, Iran’s navy said on Monday.

The incident occurred in the Gulf of Oman where Iran regularly conducts naval training, according to the Reuters report. The frigate Jamaran fired at a training target that was released by the Konarak, but was hit, said state broadcaster IRIB.

“The incident took place in the perimeter of Iran’s southern Bandar-e Jask port on the Gulf of Oman during Iranian Navy drills on Sunday afternoon, in which 19 sailors were killed and 15 others were injured,” state TV said, quoting the navy.

Separately, Iran claimed that the United States has not yet responded about a possible prisoner swap, reported Reuters.

“We have stated our readiness to discuss the release of all prisoners without preconditions … but Americans have not responded yet. It seems to us that Americans are more prepared than before to end this situation,” Iranian government spokesman Ali Rabiei said, according to the government’s website Dolat.ir.

Three Iranian officials told Reuters last week that a prisoner exchange was being negotiated. Michael White of the U.S. Navy, detained in Iran since 2018, would likely be included.

“We are worried about the safety and health of jailed Iranians in America. … We hold America responsible for their safety amid the coronavirus outbreak,” Rabiei was quoted as saying.