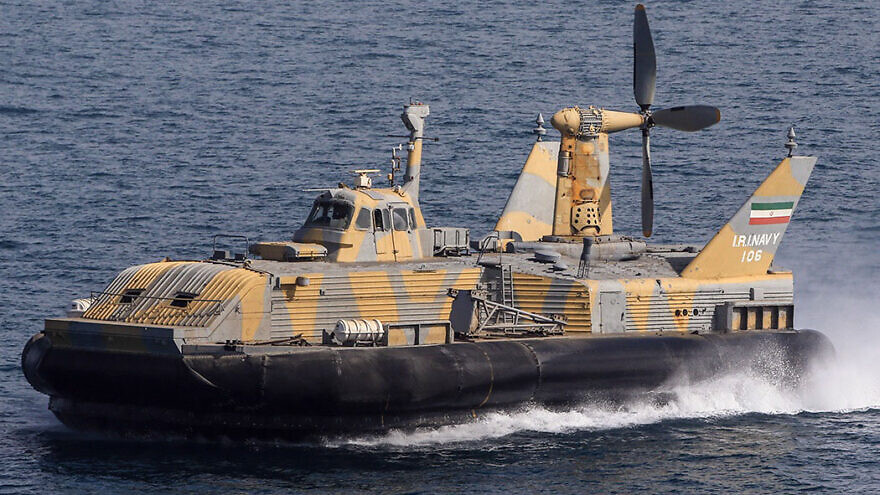 (May 20, 2022 / JNS) Iran’s Islamic Revolutionary Guards Corps’ (IRGC) Navy maintains a covert presence in the Red Sea through an array of ships, including some that gather intelligence and act as forward bases, a top defense researcher has said.

Lt. Col. (ret.) Michael Segall, a senior analyst at the Jerusalem Center for Public Affairs, told JNS that after an alleged Israeli attack on the Saviz ship – described by international media as an IRGC ship acting as a forward and expeditionary base ship – the Iranians replaced it with a new ship, the Shahid Roudaki– a conversion of merchant ship into military floating base-, which is also operated by the IRGC, and is located off the Eritrean coastline.

“The Shahid Roudaki  and other forward base ship are usually equipped with fast boats that can be lowered to the sea with cranes,” said Segall. “Usually, the Islamic Republic of  Iran Navy (IRIN) is active in missions/deployment outside of the Persian Gulf, while the IRGC-N is responsible for the Persian Gulf and Iran’s littoral shores. But they also cooperate, such as when IRGC forward naval bases may cooperate with Iran Navy ships in international waters.”

While the IRGC usually deploys forward base ships to act as intelligence-gatherers and enable rapid attack capabilities, the Iranian Navy, which is less well funded than its IRGC equivalent, unveiled last year its own forward base, in the form of a large ship called the IRIS Markan, a converted tanker, able to act as a mothership for naval operations, such as escorting Iranian tankers.

“The Markan is a huge ship that accompanies smaller vessels,” said Segall.

On Thursday, Reuters reported that a vessel was attacked 63 kilometers (34 nautical miles) off the Yemenite coastline, adding that an investigation was underway. British maritime security company Ambrey Intelligence said the incident involved a sailing vessel that managed to escape an attempted boarding from occupants of skiffs and that the crew have been reported safe, the report stated.

The incident is a reminder of Iran’s ongoing harassment and attack of international shipping, including oil tankers.

On July 30 and July 31, 2021, the IRGC sent suicide unmanned aerial vehicles to attack the Mercer Street tanker off the coast of Oman, killing two personnel on board.

That same year, the IRGC unveiled its new Shahid Soleimani missile corvette, equipped with a range of cruise missiles and other attack capabilities.

“The IRGC and the Iranian Navy often justify their presence off the Yemeni coast under the banner of countering piracy, which it does do, but this is an excuse,” said Segall. “In reality, the Iranian ships in this area are smuggling weapons to the Yemenite Houthis.”

The IRGC’s naval division is the second largest in the elite military organization, with only the IRGC’s air force being larger. The less equipped Iranian Navy, meanwhile, continues to send warships to accompany Iranian oil tankers, as they set sail to destinations as far away as Venezuela.

In addition to Iran’s naval activities around the Middle East and beyond, Iran is constantly upgrading its asymmetrical sea tactics and exporting these to its proxies and partners, like Hezbollah in Lebanon, Hamas in Gaza and the Houthis in Yemen.

“We have seen Iranian tactics over and over again in Yemen, which has become Iran’s biggest combat lab,” said Segall. “The crux of this doctrine is the use of fast boats laden with bombs. Some are manned and some are unmanned, using GPS guidance systems. These have attacked Saudi offshore targets,” he noted.

The use of anti-ship cruise missiles—as Hezbollah did against Israel in a deadly attack in the 2006 Second Lebanon War—is also evolving as an attack capability, he stated.

“They are building sea-based abilities to launch UAVs, and this is something that can reach our area, too,” cautioned Segall. The use of small submarines for laying mines is another Iranian aspect of this doctrine, as is using the many islands around the Persian Gulf to hide small attack vessels.

The United States 5th Fleet, which is based in Bahrain, is “highly aware of the Iranian doctrine. They are preparing to deal with it in a manner of ways. The Israeli Navy is preparing for these things, too,” said Segall, adding that it is safe to believe that Israel is closely monitoring events in Yemen to learn more about Iranian thinking about combat at sea.

“The clear and present danger is to Israel’s offshore gas rigs. Israel has built a multi-layered defense around these,” said Segall. “In Yemen, Iran is learning about how to use UAVs, ballistic missiles, cruise missiles and fast-attack boats.”

Saudi Arabia, for its part, has increased its own naval presence off the African Red Sea coast in an effort to cut arms smuggling to the Houthis and reduce the threatening Iranian presence.

The naval shadow arms race and regionwide tensions between Iran and its proxies on the one hand, and the Israeli-Sunni pro-American bloc on the other, looks set to continue.