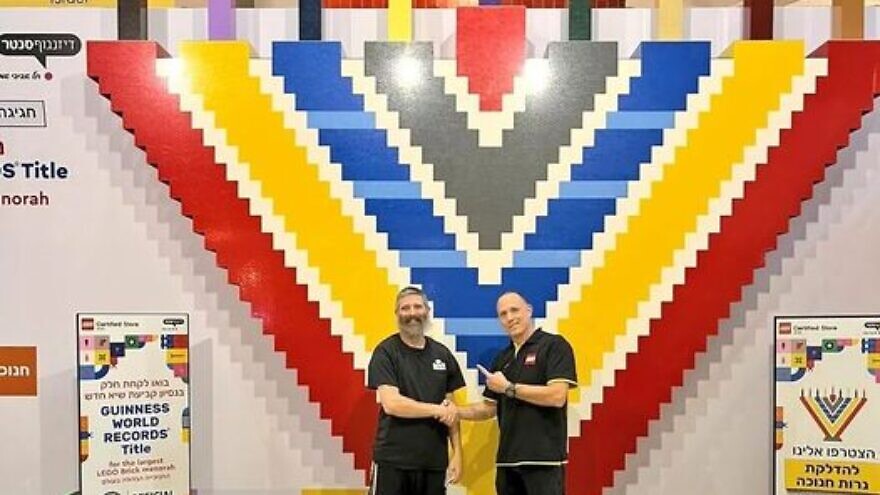 (December 19, 2022 / JNS) A Tel Aviv LEGO store has secured what is believed to be the largest-ever LEGO menorah.

Kasowitz had contacted the owner of the Israeli store, expressing his desire to collaborate on a future project. But he didn’t imagine it would be something this big.

“It’s kind of unheard of,” Kasowtiz, 45, told JNS. “I was thrilled to do it. There were difficulties along the way. We knocked it out in basically three days and it took a month to go back and forth with LEGO in getting the right pieces for my design. It’s between 131,000 and 136,000 bricks. I provided them with instructions, but in the end, I told them I’d be really excited to come to Israel and help build it. It’s massive. I explained that for safety reasons, it has to be done right…They said, ‘No problem.’”

He said that while they still have to wait for the Guiness Book of World Records, he is certain it will be.

His love for LEGO started when he was 4-years-old. He is the son of shluchim (emissaries) of the Chabad-Lubavitch movement in Des Moines, Iowa, across from Drake College. He said that his brother, for his upsherin (first haircut at age 3), received a LEGO toy—and so did Kasowitz and his sister, so they would not become jealous. Kasowitz got a red fire truck.

“I’ll never forget it,” Kasowitz said. “I ran upstairs on the spot and challenged myself not to look at the instructions if I didn’t have to and have been challenging myself to build stiff ever since.”

Born in Brooklyn, Kasowitz, who has lived in Minnesota, proceeded to hone his LEGO art skills as the years went on.

Now, with Kasowitz’s creation in hand, the Tel Aviv store is applying to get into the Guinness Book of World Records for the largest LEGO brick menorah.

“Growing up, I didn’t have the opportunity to have Jewish LEGO, and thankfully Hashem gave me the talent and ability to make them for others,” Kasowitz said.