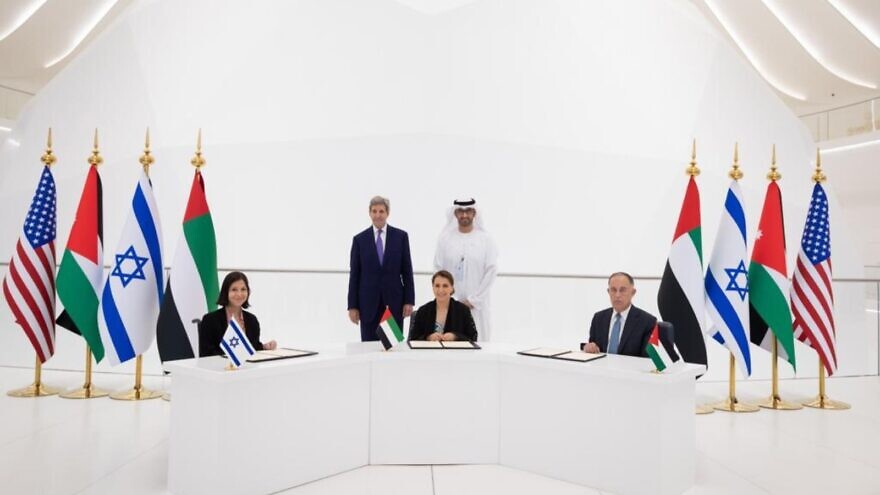 (January 31, 2022 / Israel21c) Business, trade and cultural activities have flourished in the year following the historic Abraham Accords signed by Israel, the United Arab Emirates and Bahrain. Israeli President Isaac Herzog and First Lady Michal Herzog landed in Abu Dhabi on Jan. 30 for a historic visit, underlining the ongoing warm relations between the countries.

One area ripe for joint projects is the environment, especially as the Gulf states move beyond an oil-based economy and the region grapples with water scarcity. In November, the UAE brokered solar-energy and desalinated-water exchange plans between Israel and Jordan, which signed a peace treaty in 1994. This would be the largest renewable energy project in the Middle East.

“There have been exciting developments in environmental cooperation,” said Asher Fredman, CEO of Gulf-Israel Green Ventures and director for Israel at the Abraham Accords Peace Institute, an American nonprofit dedicated to strengthening bonds among the signers of the accords through economic investment and people-to-people ties.

“In the area of climate-related issues, the first year was about getting to know what each side was looking for,” said Fredman. “A lot of learning was done, and frameworks were set for expectations.”

“One of the next stages is to connect Israeli innovation with very innovative large-scale projects in the Gulf in areas such as sustainable urban living, renewable energy and carbon capture,” said Fredman.

He noted that when the Expo 2020 Dubai ends in March, the fairgrounds will be turned into a demo area for international startups and technologies, giving Israeli companies another stage to showcase their innovations.

Here are some of the many ways in which Israel is working with Gulf partners toward a greener future.

Masdar already has several ongoing projects with EDF’s French parent company, including the Al Dhafra solar project in the UAE, set to be the world’s largest single-site solar plant, and eight renewable energy projects in the United States. 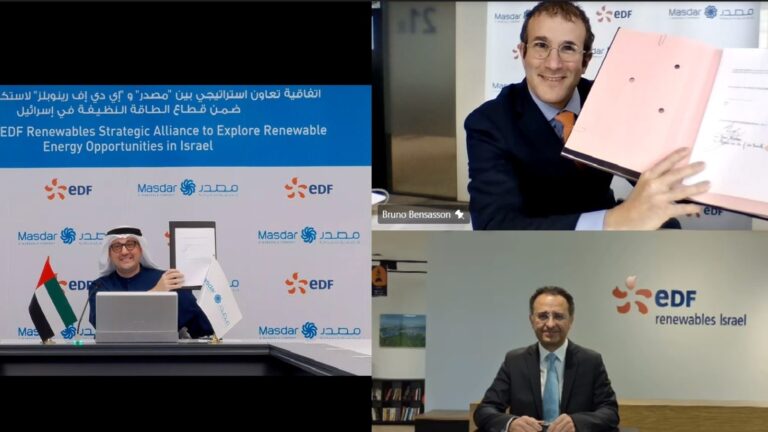 Masdar and EDF Renewables sign a Memorandum of Understanding at a virtual ceremony during Abu Dhabi Sustainability Week 2021. Source: Screenshot.

Masdar and EDF Renewables Israel aim to collaborate on existing and future renewable energy projects while also exploring joint participation in programs announced by the Israeli government toward its goal of producing 30 percent of its energy from renewable sources by 2030.

“The UAE and Israel have embarked on a new era of cooperation on renewable energy and associated technologies, which will benefit both our nations and support our clean-energy objectives,” said Masdar CEO Mohamed Jameel al-Ramahi.

“Israel is a country with an attractive long-term potential for renewable energies and innovative technologies. By joining our forces with Masdar on the Israeli market, we will strengthen the leading position that the teams of EDF Renewables Israel have achieved over the last decade, especially in solar energy,” added Bruno Bensasson, chairman and CEO of EDF Renewables.

As part of the agreement, the two companies will develop an Israeli-Emirati water research institute with the Moshe Mirilashvili Institute for Applied Water Studies at Tel Aviv University. 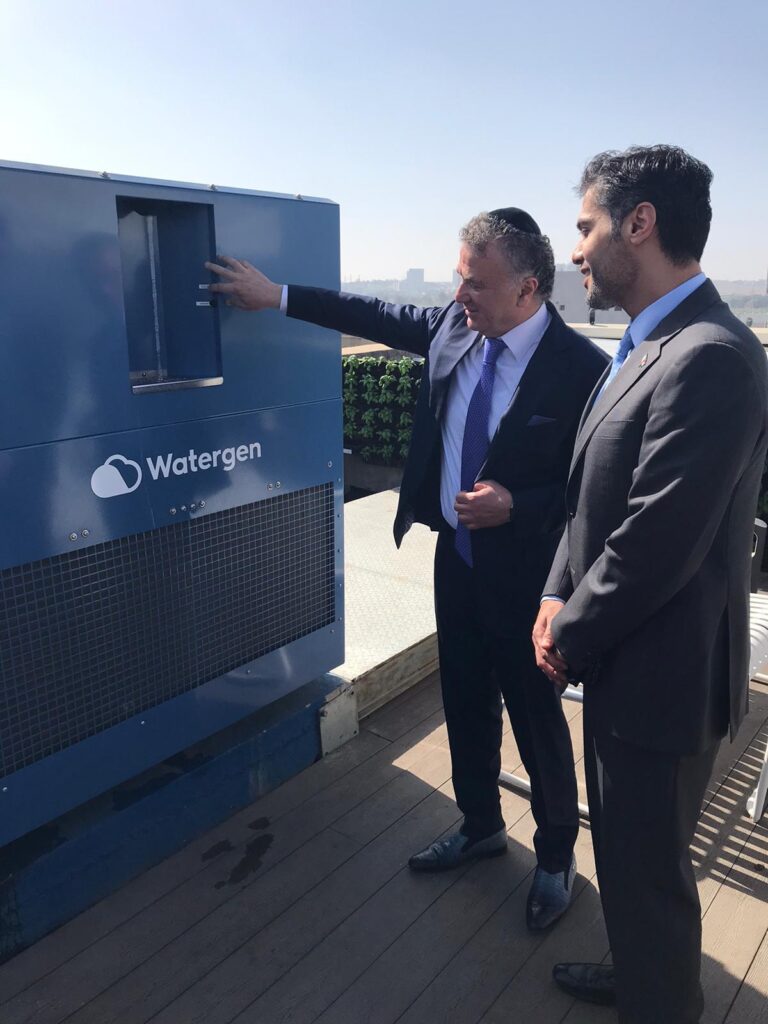 The joint venture will lay the groundwork for the commercialization of Watergen products across the water-stressed region, including other Gulf states, as well as in Africa.

In October, dozens of Watergen units arrived for installation in Abu Dhabi and a Watergen production facility is under construction. 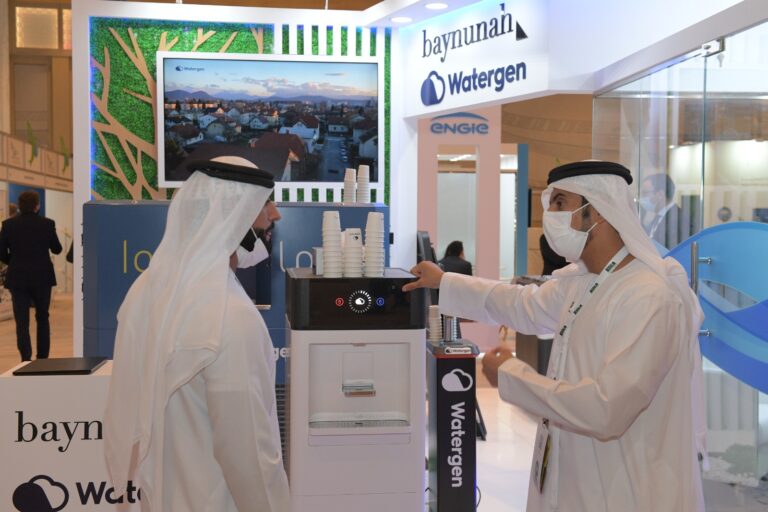 In September 2021, Watergen participated in the Fifth Arab Water Security for Peace and Sustainable Development Forum in the United Arab Emirates. Credit: Watergen.

“Thanks to the Abraham Accords, we—an Israeli company—are able to cooperate with our Middle East neighbors to solve one of the region’s difficult problems: water scarcity,” said Watergen president and chairman Michael Mirilashvili.

“Throughout history, conflicts have often been centered around controlling water sources. Today we are doing the opposite: building peace and a common future around a groundbreaking Israeli technology.”

KIP agreed to invest up to $1.2 billion in establishing a UAE manufacturing facility for Aquarius, whose lightweight linear engine is powered solely by hydrogen gas.

“For years, we have dedicated ourselves to the development of an innovative, compact and lightweight engine to address the expanding and more diversified use of electricity,” said Ariel Gorfung, co-founder and CEO of Aquarius.

“We can become the power generation engine of choice for a broad range of sectors, from communications, aviation and security through to electric vehicles.”

In November, the University of Haifa and Zayed University in the United Arab Emirates signed an academic cooperation agreement spearheading joint research on environmental issues such as marine sciences, education and natural resource management. The universities also agreed to conduct student and faculty exchanges.

“In the wake of many common challenges facing humanity as we grapple with the climate crisis, this kind of academic cooperation is a way to preserve what all of us call home—the planet,” said University of Haifa President Ron Robin. 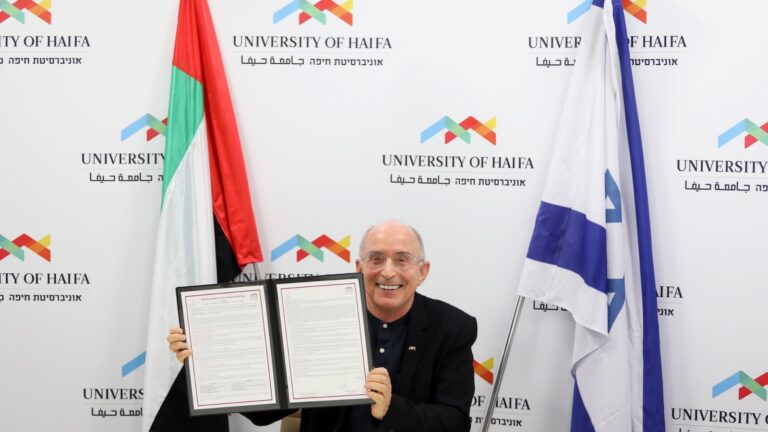 Professor Robin, formerly vice provost at New York University, established NYU’s international campus in Abu Dhabi in 2010. He began his remarks in Arabic, noting that Zayed University recently celebrated its 50th anniversary and the University of Haifa is marking 50 years in 2022.

The UAE Minister of Culture and Youth, Noura bint Mohammed Al Kaabi, said this partnership “will create cross-border opportunities for students, faculty and the region as a whole. Together, we can lead innovation with regard to food and water security, marine sciences and environmental sustainability.”

Leaders of 25 youth organizations from Israel and the UAE met on Dec. 15 at the Israeli Pavilion at Expo Dubai to discuss the role of formal and informal education in the fight against climate change. 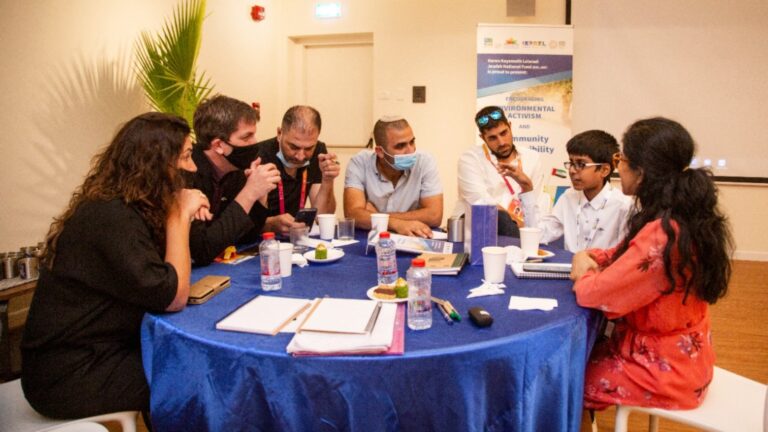 Youth organization leaders from Israel and the UAE meet in Dubai to discuss the role of education in fighting climate change. Credit: KKL-JNF.

Initiated by Dubai Cares and Keren Kayemeth L’Israel-Jewish National Fund (KKL-JNF), the first-of-its-kind panel featured leaders from NGOs in both countries working toward peace and sustainability.

They discussed innovation as a driver for significant social change; how youth volunteers can be a model for engagement strategies regarding climate change; environmental responsibility in multicultural societies; environmental education in impoverished communities; and community adoption of nature and heritage sites.

“The education delegation to the Expo fulfilled the dream of generations to create a real connection between Israel and the countries and peoples surrounding it,” said Jerbi. “Peace always starts with education, and when you bring organizations and youth movements together under a shared vision for the future, this leads to a real long-term connection.”

During a five-day summit in Dubai between UAE teens and their peers from Jerusalem’s PICO Kids Ambassadors program in December, the Dubai Future Foundation sponsored a “makeathon” where the kids developed prototypes for workable solutions to the water scarcity crisis.

Among their ideas were desalination facilities, vertical farms and portable bottle caps with integrated filters. 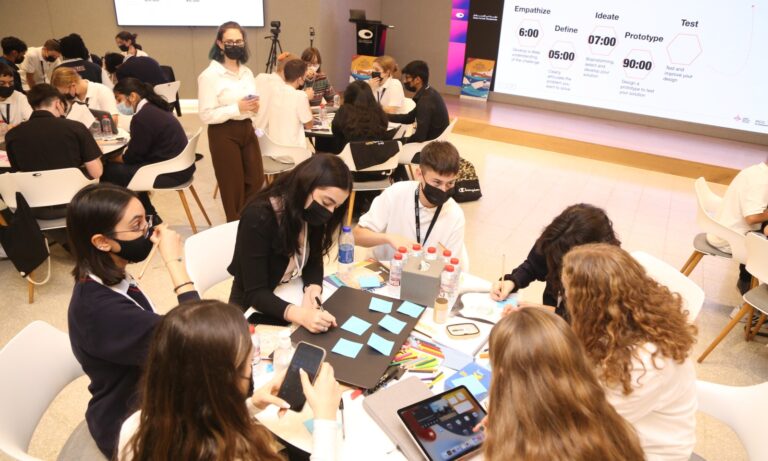 PICO Kids Ambassadors and peers from Dubai at a makeathon for water-scarcity solutions. Photo by Barak Alkobi.

The mission’s partners were the Taaleem Schools, Target Global, Concert Together for Israel and the Abraham Accords Peace Institute.

“Children have a particularly unique vantage point to act as innovators and conceive of new ideas in ways that adults might not be able to,” said Elie Wurtman, co-founder and managing partner of PICO Venture Partners and founder of PICO Kids.

“The Abraham Accords have presented a historic vision for collaboration between Israel and the Gulf countries, and it is only natural that the collaborations that we are already seeing on commercial and investment fronts should now be realized among our youth as well,” Wurtman said.