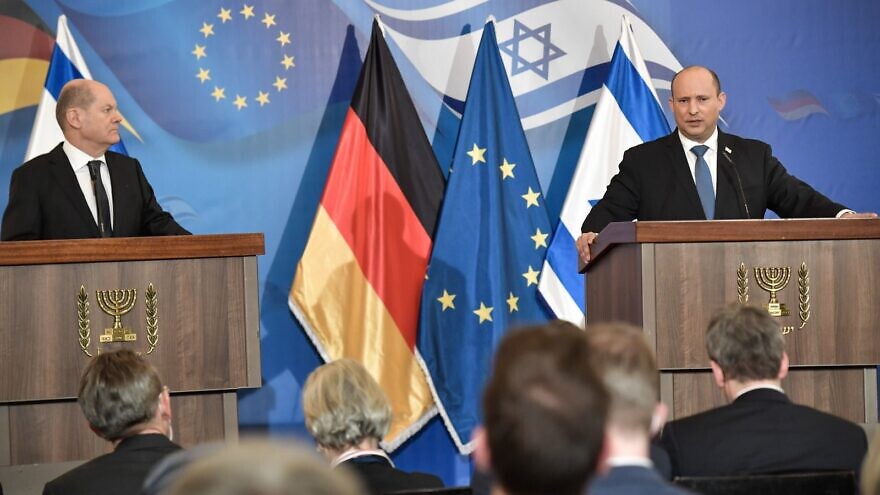 (March 2, 2022 / JNS) Israel and Germany announced new strategic cooperation that is being hailed as a significant upgrade in relations amid the ongoing crisis in Ukraine.

In a joint press conference with German Chancellor Olaf Scholz in Jerusalem on Wednesday, Israeli Prime Minister Naftali Bennett said that the two leaders “have agreed on the creation of a new strategic cooperation between the State of Israel and Germany. This will be in the format of a bi-annual dialogue on security and diplomatic matters.”

“I think that this is a significant upgrade in our relations,” Bennett added.

The Israeli leader said that Scholz visit, which comes amid the Russian invasion of Ukraine as well as Germany and other world powers are engaged in talks with Iran over its nuclear program, comes at a “very fateful and sensitive time.”

“We just spoke at length on the situation in Ukraine. Our obligation as leaders is to do our utmost to stop the bloodshed, to bring what is going on from the battlefield to the negotiating table as quickly as possible; it is still not too late,” Bennett said.

Bennett also said Israel is “closely monitoring the talks in Vienna including the possibility that an agreement will be signed that allows Iran to install centrifuges on a broad scale within a few years. This possibility is unacceptable to us.”

“Israel will know how to defend itself and ensure both its security and its future. We also expect our friends in the world not to countenance a massive installation of centrifuges in another two-and-a-half years, and to already prepare for the day after,” Bennett said.

However, Scholz said that a new nuclear agreement with Iran “cannot be postponed any longer.”

“What we would like to see is that an agreement is reached in Vienna,” the German leader added.

The visit by Scholz, the first since he took over as German chancellor from Angela Merkel in December, was planned well ahead of the current situation in Ukraine and still went ahead despite the crisis.

Scholz also said that he discussed the situation in Ukraine with Bennett.

“We are extremely worried about the further course of the conflict. I want to repeat my call for all military action to stop immediately. Attacks on civilians and civilian infrastructure must cease. And of course, it’s now about giving diplomacy a big opportunity again,” Scholz said.

Last Sunday, Scholz broke with decades of Germany policy when he announced that he ordered the military to supply arms to Ukrainians, including 1,000 anti-tank weapons and 500 surface-to-air missiles. Furthermore, Scholz also announced a major increase in German defense spending.

Nevertheless, Israel has been more tepid in its approach to the Russian-Ukrainian conflict. While Israel has provided humanitarian assistance to the Ukrainians, it has stopped short of full condemnation or joining any western sanctions against the Russian regime.

“Germany will always stand fast by Israel’s side,” Scholz said.