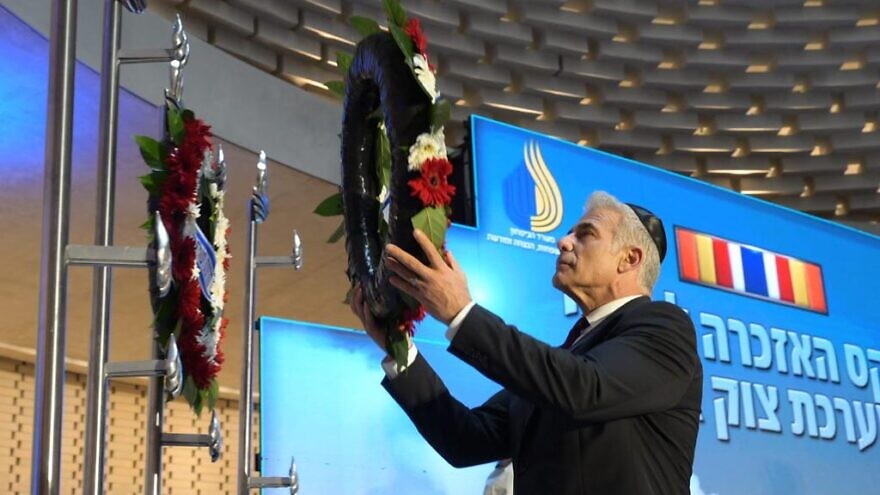 (July 11, 2022 / JNS) Israel has adopted a “zero tolerance” policy regarding terrorism emanating from the Gaza Stip and will respond immediately to any such hostile activity, Prime Minister Yair Lapid said Sunday night.

He was speaking at a state memorial ceremony at Jerusalem’s Mount Herzl military cemetery commemorating the 70 people killed in Israel during “Operation Protective Edge,” the name of the Israel Defense Forces mission during the 50-day war against Hamas in 2014.

“Don’t test us,” Lapid said, according to a statement from his office. “In the war against Hamas, a brutal and murderous terrorist organization, we are not only right but we are also strong. The best army in the Middle East and the most advanced technology, alongside our economic and diplomatic prowess, these guarantee our security,” he said.

Lapid noted that he was a member of the Cabinet during the war and nothing in his experience had prepared him for making the decision to send forces into battle.

“Every soldier who did not return home is etched onto our souls. We have a sacred obligation to bring home our fallen soldiers, Hadar Goldin and Oron Shaul for burial,” the prime minister said in reference to Hamas’s ongoing refusal to return to Israeli authorities the remains of two IDF soldiers who were killed in Gaza during “Operation Protective Edge.”

In this respect, Israeli Defense Minister Benny Gantz made clear at the ceremony that Jerusalem was continuing to work “on behalf of those who remain there in Gaza,” and that the government would not forge any long-term cease-fire agreement with Hamas that did not resolve the matter.

“Without them [returning], there cannot be a full arrangement in the Gaza Strip beyond humanitarian assistance,” Gantz, who was IDF chief of staff during the war, was cited by Israeli media as saying.

“The return of our sons is a condition for an arrangement and development,” he added.

Hamas has also been holding captive for over five years Israeli civilians Avera Mengistu and Hisham a-Said, both of whom are believed to suffer from mental illness and crossed into Gaza of their own accord.

For his part, Lapid emphasized that Israel owes its security to its heroes—”to each of the fallen soldiers of Israel’s wars, and to those who fought ferociously and got to return home safely as well. They are the true Defensive Shield, they are our Iron Dome.”