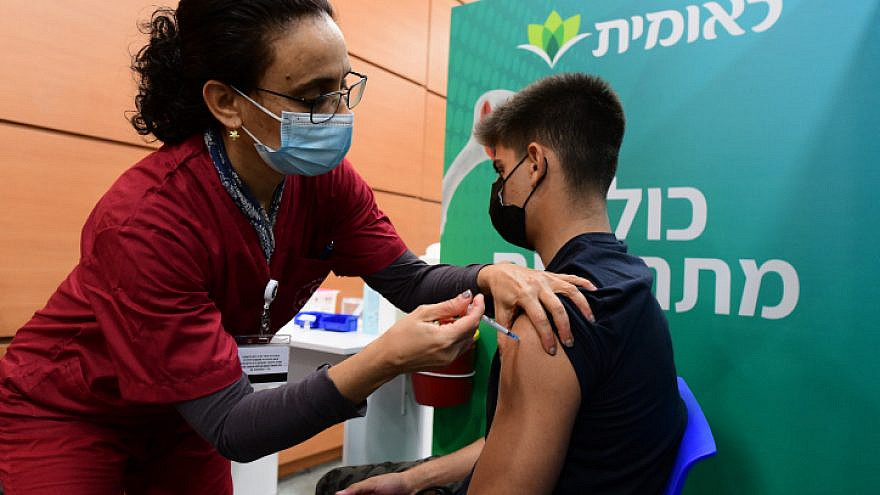 (January 25, 2021 / JNS) Israel surpassed the 1 million mark in the number of people who have received both doses of the COVID-19 vaccine. As of Monday morning, 1,106, 506 people had received the two doses, representing 12.45 percent of the population, according to the Ministry of Health.

“Over a million people received the second vaccine!’ Heath Minister Yuli Edelstein tweeted on Monday. “Israel continues to lead the world with 3.7 million vaccines … and we start the week with about 200,000 vaccinations a day. This is the way to beat the virus!”

Nearly 2.6 million Israelis had been vaccinated with the first dose of the vaccine, or 29.2 percent of the population.

On Friday, KSM Maccabi Research and Innovation Center released a study that indicated a “significant decrease” in the number of coronavirus infections in the over-60 population, who had been vaccinated in late December with the first dose and then again mid-January with the second dose.

The study also found that hospitalizations for the group also decreased by slightly more than 60 percent in the same time period.

After analyzing a sample group of 50,777 people in the over-60 age group, the study indicated that new infections for the group began to decrease beginning two weeks after receiving the first dose of the vaccine and fell to 6.3 percent two days after receiving the second dose.

By comparison, the study measured new infections among the general population of Maccabi members over the age of 60 (both vaccinated and unvaccinated). The number of new infections for this group hovered almost steady in the same time period, ranging from a high of 20.1 percent to a low of 18.1.

The Maccabi study was done in collaboration with KI Institute, an Israeli computational health research firm.

Eighty percent of the over-60 population in Israel has been vaccinated, with close to 52 percent already having received the second dose.

A separate study conducted earlier by Tel Aviv’s Sheba Medical Center at Tel HaShomer found that more than 98 percent of people who received both doses of the COVID-19 vaccine have developed antibodies that neutralize the virus—some even higher than the level of antibodies measured in recovered COVID-19 patients who had been seriously ill.

Although the rate of new cases has decreased by close to half of the high of over 10,000 cases recorded on Dec.18,  as of Monday, the number of severe cases has remained level, most likely because of the more contagious and possibly deadly nature of the U.K. and South African variants.

At an Israeli Cabinet meeting Sunday, Netanyahu said that the goal of the government is to vaccinate a quarter of a million Israelis per day.