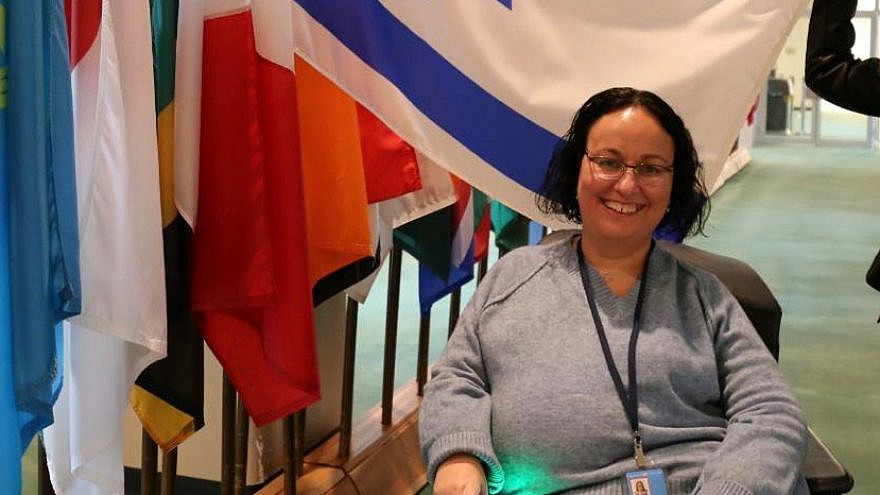 (November 30, 2020 / JNS) Following an international diplomatic campaign, Odelia Fitoussi was elected on Monday to represent Israel on the U.N. Committee on the Rights of Persons with Disabilities (CRPD).

Fitoussi, 43, who was born with muscular dystrophy (SMA2), will become the first Israeli elected to serve on this prestigious committee, which is among the most sought-after U.N. expert committees.

The CRPD is the leading U.N. body responsible for formulating a global policy for the 182 signatory states to the Convention on the Rights of Persons with Disabilities. In the election held on Monday at U.N. headquarters in New York City, representatives from 27 countries competed for nine slots on the committee. Israel won in the first round, receiving support from 109 countries.

Israeli Ambassador to the United Nations Gilad Erdan said Fitoussi has brought immense pride to Israel in one of the most important issues, and that her selection had “moved him greatly.”

“It represents a true triumph of the human spirit,” he said. “Israel’s extensive experience in the field of rights for people with disabilities will contribute greatly to the committee’s activities and will have a positive influence on the lives of many around the world. I am sure that Odelia will be an excellent ambassador and achieve great things.”

Over the past year, Israel’s Ministry of Foreign Affairs and Israel’s Mission to the United Nations has led a diplomatic effort in capitals around the world and in New York with member states to mobilize support for Fitoussi’s candidacy. She herself met with more than 100 diplomats from around the globe. Erdan discussed her candidacy in his meetings with other ambassadors and even succeeded in garnering support from representatives of some Arab countries, which usually refrain from supporting Israeli candidates in U.N. bodies.

Fitoussi, a resident of Bat Yam, chose to dedicate her life to fighting for the rights of people with disabilities. She works as an art therapist with children, and has pushed for greater inclusion of teachers with disabilities in the education system and to implement the Convention on the Rights of Persons with Disabilities in Israel.