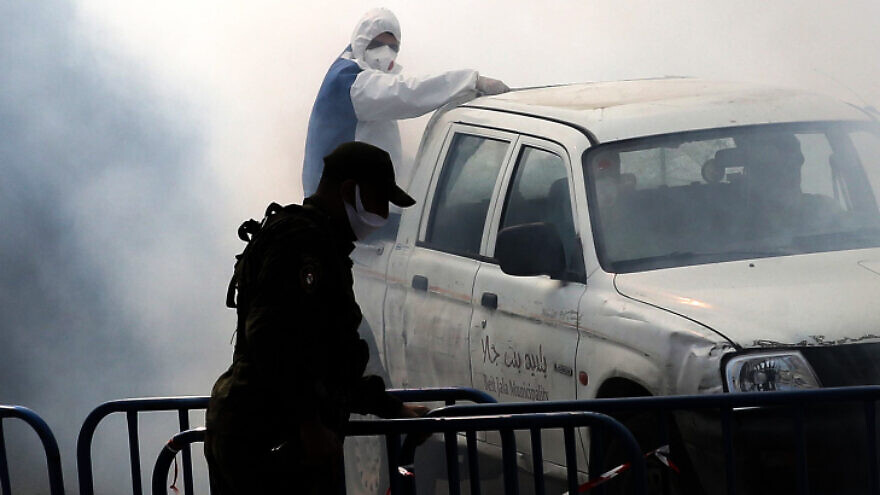 A Palestinian municipal employee disinfects a street at the entrance to the West Bank city of Bethlehem on March 12, 2020. Photo by Wisam Hashlamoun/Flash90.
Spread the word.
Help JNS grow!
Share now:

(March 16, 2020 / JNS) Israeli and Palestinian Authority medical teams have been working to prevent the spread of COVID-19 in Arab-controlled areas of Judea and Samaria, according to a report by the Unit for the Coordination of Government Activities in the Territories (COGAT), as reports from the P.A. on Sunday expressed fear over the ramifications of a large-scale infection in the region.

According to COGAT, Israel has been providing support to the P.A. in the form of test kits and professional assistance, such as joint training sessions on issues pertaining to the virus itself, as well as protection of medical personnel and the testing of patients.

“Bacteria and viruses do not stop at the border, and the spread of the dangerous virus in [the Palestinian Authority] can also jeopardize the health of the residents of Israel,” Dalia Basa, Health Coordinator for COGAT, said in a statement.

As of mid-Sunday, the number of infected P.A. residents was 38, almost all of whom lived in the Bethlehem area. A closure of entrances and exits of Bethlehem was subsequently ordered by Israel’s Defense Ministry.

The P.A. Health Ministry expressed concern that the virus, which had infected 255 Israelis as of Monday night, would cause a major outbreak in areas run by the P.A.

“We won’t be able to deal with the crisis alone,” a senior P.A. health official told The Jerusalem Post on Sunday. “We will need assistance from Israel and other international parties. We are already coordinating on a daily basis with Israel to prevent the spread of the virus.”

In an effort to limit chances of infection, P.A. officials shuttered Bethlehem tourist sites on March 6 when it was discovered that tourists had infected workers at a city hotel.

Since then, the P.A. has taken steps to restrict movement among residents, limiting visitors of hospital patients to first-degree relatives, and cracking down on shop and restaurant owners who have ignored orders to shut down their businesses in an effort to stave off  spread of the virus.