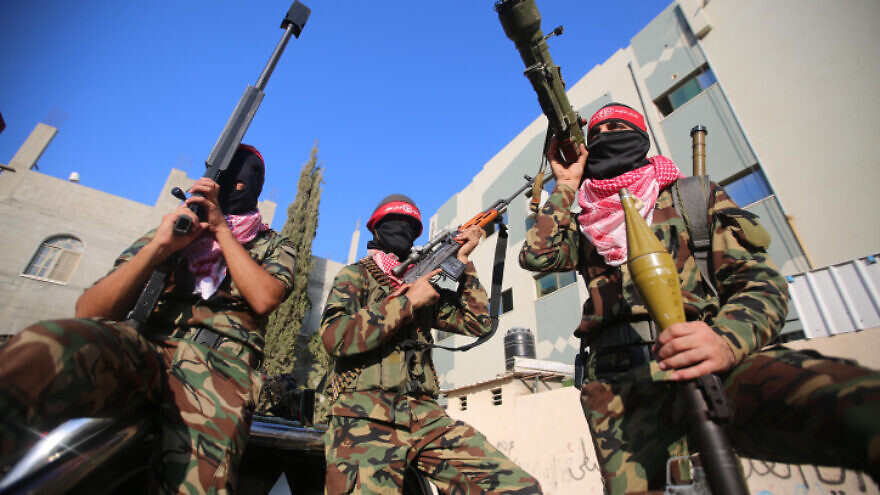 Palestinians take part in a rally organized by the Popular Front for the Liberation of Palestine (PFLP) on the anniversary of the killing of its official Abu Ali Mustafa in Gaza City on Aug. 31, 2019. Photo by Hassan Jedi/Flash90.
Republish this article
385 WORDS
Spread the word.
Help JNS grow!
Share now:

(May 6, 2021 / JNS) Israel’s Shin Bet announced that it has uncovered a financing network for the Popular Front for the Liberation of Palestine (PFLP) where the terror group stole millions of euros from European aid organizations and governments to fund terrorist activities.

The money, operating under the guide of humanitarian assistance under a “Health Committee,” was used to pay families of slain terrorists, recruit new operatives and spread its messaging throughout the West Bank, the Gaza Strip and eastern Jerusalem, according to the Shin Bet.

Professor Gerald Steinberg, president of NGO Monitor, said his group has been tracking the close links between several European-funded NGOs and the PFLP.

“For 20 years, European officials have been providing millions of euros to the Palestinian network of terror-linked groups under the facades of human rights and civil society. Employing heavy secrecy, the Europeans continued to turn a blind eye to the clear terror links, claiming ‘there was no ‘evidence’ or ‘we only fund projects, not NGOs,’ ” said Steinberg.

According to NGO Monitor, between 2014 and 2021, the governments of Netherlands, Spain, Belgium, Italy, Sweden, Denmark, Ireland Germany, France, Norway, Switzerland and the European Union provided more than €200 million (more than $240 million) to the PFLP NGO network, including to the Health Work Committees.

The PFLP is designated as a terror group by the United States, European Union, Canada, Israel and others.

As a result of the investigation, the Israeli Foreign Ministry said it has summoned the ambassadors of several European countries to present the findings, including evidence that European governmental funds went to the PFLP terrorist organization.

The Israeli officials “demanded that funding transfers be frozen immediately to those institutions which, acting under the guise of humanitarian organizations, recruit funds for the terrorist organization. The MFA emphasized the need for close supervision, which will prevent the continuation of funding for this organization.”

They also insisted that “European countries establish a dialogue, intended to improve control measures and supervision of the funds transferred to Palestinian non-governmental organizations, in order to ensure that these funds do not end up in the hands of terrorists.”