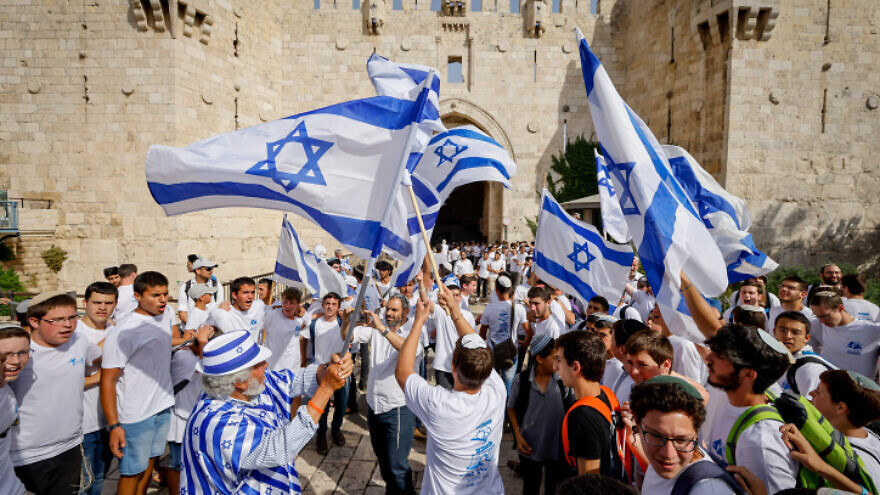 (May 29, 2022 / JNS) The Jerusalem Day flag march began on Sunday afternoon amid heightened tensions that saw clashes and arrests in the capital throughout the day.

The route and format approved for the event was the same as it has been for “over 30 years without changes to the route or the status quo,” the Israel Police said in a statement.

The event began with marchers gathering at two stages on King George Street for music and speeches. The crowd was addressed by Knesset member Itamar Ben-Gvir (Oztma Yehudit,” who said, “Let Hamas threaten with their missiles. Those who believe are not afraid.”

The march was scheduled to arrive at Damascus Gate in the evening, and proceed to the Temple Mount in the direction of the Western Wall. Some of the marchers preferred to travel to the Western Wall via Jaffa Gate, Mako reported.

Scuffles between marchers and eastern Jerusalem residents were reported sporadically throughout the day, and a riot broke out near Damascus Gate. Rioters hurled rocks and bottles at security forces and assaulted Israel Police officers operating at the site, police said. A civilian, a bodyguard who was accompanying a public figure, was lightly injured during the riot and was evacuated for medical care.

Before that, police arrested 18 Arab suspects in the Old City of Jerusalem and on the Temple Mount for disorderly conduct, assaulting Israel Police officers and civilians and participating in violent riots.

Muslim worshippers clashed with police on the Temple Mount on Sunday morning after a Jewish group visited the site, according to the Israel Police.

The Israel Police said a total of 2,600 individuals visited the Temple Mount during the allotment reserved for non-Muslim visitors on Sunday.

A  number of Jewish visitors in one of the last groups to visit on Sunday bowed down in prayer and waved Israeli flags, and police removed them from the site, detaining a number of Israelis.

The number represents an all-time high, according to Ynet. In addition, approximately 15,000 people visited the Western Wall.

In May 2021, Israeli authorities changed the route of the Jerusalem Day march to avoid Damascus Gate, as tensions flared with Hamas and Palestinian Islamic Jihad in Gaza. The decision did not alter Hamas’s decision to fire rockets at Jerusalem and southern Israel that day, sparking the 11-day conflict against Hamas and Palestinian Islamic Jihad in the Gaza Strip, during which 4,000-plus rockets were fired towards Israeli population centers.