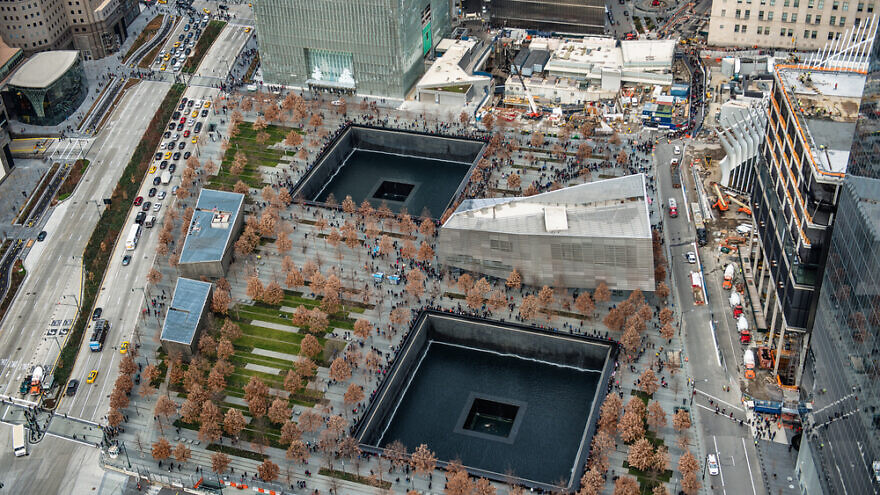 (September 9, 2021 / JNS) Allan Englander usually commemorates Sept. 11 at the Tribeca Synagogue, where he was having breakfast after morning minyan that Tuesday in 2001 when he heard a plane had hit the World Trade Center. “We didn’t believe it at first—somebody called in, and we all rushed out and ran to the corner, where we had a view of the World Trade Center,” he recalls. “I got there just in time to see the second plane crash into the tower.”

On the anniversary of that day, they pray, have breakfast, remember how it was, what they were doing and how they felt, he says. “I try to make an effort to go there on 9/11 simply because it’s reminiscent, it’s remembering,” he says.

This year’s commemoration will be different, though. With the 20th anniversary of the tragedy falling on Saturday, instead of being minutes from the World Trade Center site, where he prays on weekdays, Englander will mark the day closer to home at a synagogue on Manhattan’s Upper East Side.

Jewish groups across New York City will be marking America’s worst acts of international terrorism in the backdrop of Shabbat this year. For some, that means moving programming to the surrounding days; for others, it means having a group of community members gathered to remember together.

On that day, they will recall four airplanes hijacked by 19 Islamic extremists, who flew two of the planes into the twin towers of the World Trade Center in New York City, a third that hit the Pentagon just outside Washington, D.C., and a fourth plane that crashed in an open field in Shanksville, Pa., killing 2,977 people.

When regular Shabbat services are over at noon this Saturday, Rabbi Jonathan Glass of the Tribeca Synagogue and his community will be welcoming in clergy from different faiths to honor the victims and pray for peace. They plan to use a large outdoor space for the commemoration, where they’ll host pre-registered attendees, as well as emphasize social distancing and wearing masks. “I felt it was very, very important to do something,” he explains. They’ll partner with other area organizations and hear from a woman who was the synagogue’s office manager at the time as well. 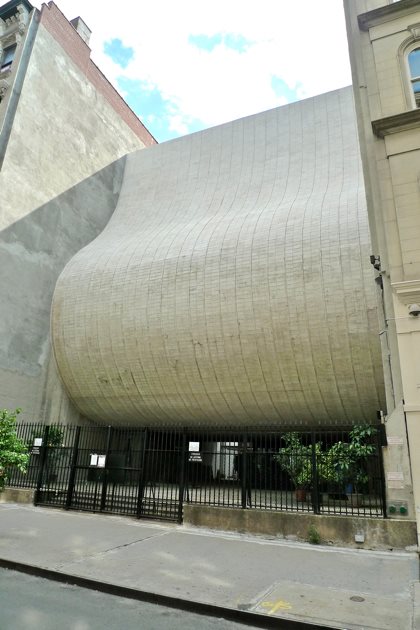 “What we will accomplish simply by marking the occasion to the degree that we are … we are showing we don’t forget, and that this was a very significant event,” he says. “Just because it’s 20 years later, it doesn’t become relegated to the dustbin of history. The people who died, they mattered, and the survivors were seriously affected. We don’t take this lightly.”

Although Shabbat isn’t a day for mourning, there are still appropriate ways to mark the event, he says. “Sometimes on Shabbat, we memorialize things; we recite the memorial prayer when it’s the anniversary of the passing of a person, we say Kaddish,” he explains. “It just has to be adjusted so you don’t go overboard. It’s not, in essence, antithetical to Shabbat; it just has to be done in the proper context.”

‘To reflect together and serve together’

Dorot, an organization that works to address social isolation among older adults and seniors, is aiming to involve more than 1,000 volunteers in 9/11 Day Activities, according to Laura Colin Klein, director of volunteer services. They’ll be delivering care packages to the homes of older adults in Manhattan and Westchester and following up with phone calls to discuss with recipients what the events of Sept. 11 mean to them. They’re also going to facilitate intergenerational phone discussion groups between teens and older adults, host an intergenerational art project where participants will make commemorative medallions, and invite volunteers to make cards for veterans and active duty service members. The organization doesn’t run programs on Shabbat, so they are spreading events throughout September, including a package delivery on Sept. 12 and Sept. 13.

“The messaging around this program for us is coming together as a community to recognize an important event in our nation’s history—to reflect together and serve together,” says Colin Klein. Their programs will be socially distanced and masked.

“I hope people feel more connected to their community so that they’re part of something bigger,” she adds, “that both the older adults and the volunteers feel like they have a really good experience from being involved and doing something for someone else.” 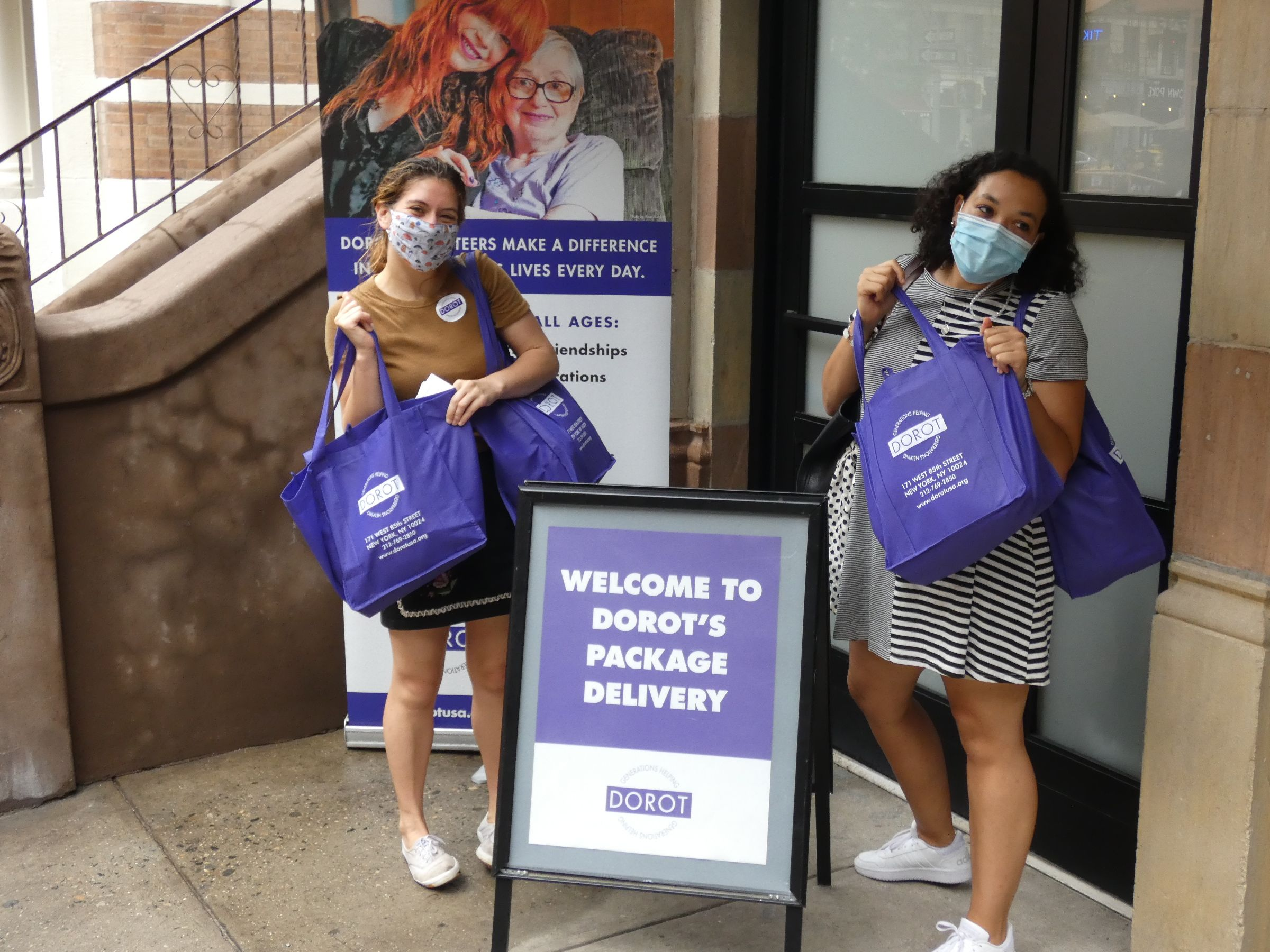 Dorot, an organization that works to address social isolation among older adults and seniors, is aiming to involve more than 1,000 volunteers in 9/11 Day Activities. Credit: Courtesy.

Manhattan resident Lori Klamner has been volunteering with Dorot for more than two decades. This year, she’ll be standing by for her 9/11 assignment, which will take place on the days around the anniversary. “Especially in New York City, that generation really remembers 9/11,” she says of the package recipients. “It was one of the major events in their lives. And I think it really is important to them to not forget about it, not to have it be forgotten by society.”

As she connects with residents as part of the delivery, Klamner plans to share her own experience as well—of waiting to hear from her sister, who was on an airplane that day. “On 9/11, I think a lot of people want to do something meaningful, whether it’s help clean up a garden or help in a school. This is the thing I like to do,” she says.

Dorot volunteer Jennifer Weintraub will drop off packages and chats by phone with residents as part of the initiative. Weintraub was in high school in 2001 and living on Long Island, but she remembers how close the event felt for her class, many of whom had parents and other relatives working in New York City. Even though they won’t be going out on Sept. 11 itself, she says she believes the impact will be significant. “I think the sentiment still carries through,” says Weintraub. “It feels shocking to realize it’s been that many years.”

Other events taking part around the city include a memorial walk on Friday, Sept. 10 through the Marlene Meyerson JCC Manhattan, a concert through the Museum of Jewish Heritage and the Knickerbocker Chamber Orchestra timed to start after Shabbat, and two talks at the 92nd Street Y on Thursday and Friday—one with Jim O’Grady, who covered 9/11 with The New York Times, and the other about the impacts of 9/11 and other environmental factors on physical and mental health.