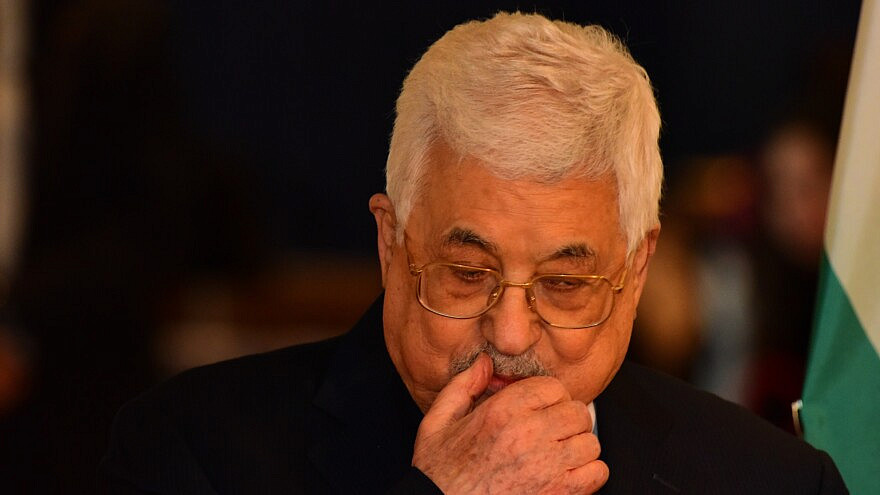 (August 18, 2022 / JNS) Pro-Israel groups are calling out Palestinian Authority leader Mahmoud Abbas for his claim that Israel has committed “50 holocausts” against Palestinians over the years.

“We are frustrated, though hardly surprised, by [his] flagrant distortion of the Holocaust and condemn his reprehensible claim, made while standing on German soil,” chairwoman Dianne Lob and CEO William Daroff of the Conference of Presidents of Major American Jewish Organizations wrote in a statement on Wednesday.

Abbas made the comments on Tuesday at a press conference alongside German Chancellor Olaf Scholz in Berlin, after being asked if he intended to apologize to Israel and Germany for the deadly attack at the 1972 Munich Olympics, in which Palestinian terrorists killed 11 members of the Israeli Olympic team.

“If we want to go over the past, go ahead. I have 50 slaughters that Israel committed … 50 massacres, 50 slaughters, 50 holocausts,” Abbas told reporters.

Scholz said on Wednesday that he was “disgusted” by Abbas’s “outrageous remarks.”

Lob and Daroff said that Abbas’s “dishonest invocation” of the Holocaust “demonstrates his deep-seated anti-Semitism and is all the more troubling given his abdication of responsibility for leading the Palestinian people in a negotiated process to resolve the conflict with Israel.”

“Abbas continues to tip his hand and the international community must continue to hold him accountable,” they added.

They also applauded Scholz for publicly condemning Abbas’s “biased rhetoric” against Israel, including labeling Israel’s treatment of Palestinians as “apartheid,” and encouraged the international community “to speak strongly and loudly against hate speech and anti-Semitism, whenever and wherever it rears its ugly head.”

Michael Mirilashvili, president of the Euro-Asian Jewish Congress, also condemned Abbas’s statements, saying on Wednesday that “attempts to distort the memory of the terrible Holocaust tragedy are an absolutely unacceptable practice that has no place in the modern world.”

“As we can see, people who make such statements act despite objective facts and evidence, they are not interested in historical truth,” he added. “They substitute reality based on their momentary political interests. Such manipulations are unacceptable since their destructive side effect is the incitement of anti-Semitic sentiments in society.”

The Central Council of Jews in Germany said it was “horrified” by Abbas’s comments in a statement on their website.

President of the Council Josef Schuster said the Palestinian leader’s words “trample on the memory of 6 million murdered Jews and damages the memory of all victims of the Holocaust. Such statements must not be left uncommented. I think it is scandalous that a relativization of the Holocaust, especially in Germany, at a press conference in the Federal Chancellery, went unchallenged.”

Abbas walked back his comments on Wednesday, calling the Holocaust “the most heinous crime in modern human history.”

He added that he did not intend to “deny the singularity of the Holocaust that occurred in the last century” and condemns it “in the strongest terms.”