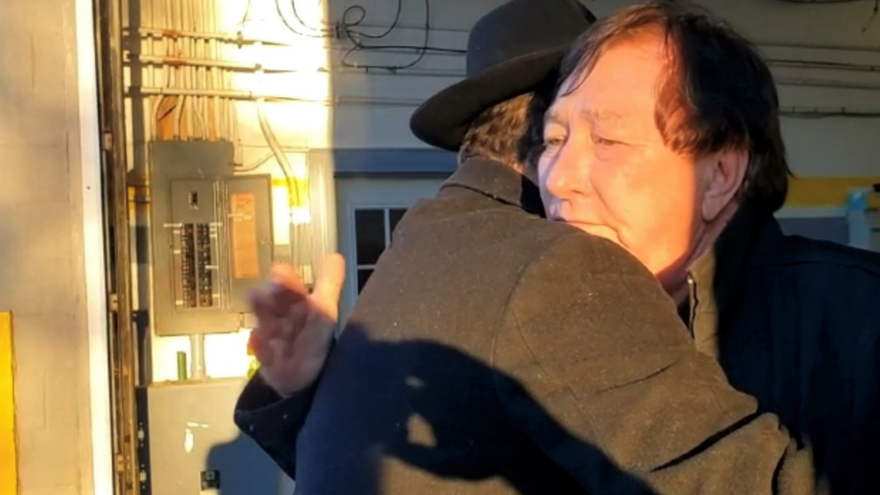 Rabbi Shlomo Litvin, co-director of Chabad of the Bluegrass, embraces a resident in one of Kentucky's hard-hit areas after a series of tornadoes decimated homes and other buildings in parts of the state, December 2021. Source: Rabbi Sholom Litvin/Twitter.
Republish this article
1115 WORDS
Spread the word.
Help JNS grow!
Share now:

(December 14, 2021 / JNS) The last time Rabbi Shlomo Litvin, co-director of Chabad of the Bluegrass, had been in Hopkinsville, Ky., he was joined by thousands of other people to see a total eclipse.

He returned to the area on Monday to find a much-changed landscape after a massive tornado ripped through the western part of the state on Dec. 10, rendering much of it temporarily uninhabitable. The tornado was one of a series of others that struck six Midwestern states on Dec. 10.

“The kindness they had shown to tourists during the eclipse was overwhelming, and to come back now and see the devastation was heartbreaking,” said Litvin, who went to the region with his brother, Rabbi Chaim Litvin of Project Friendship, a social-service arm of Chabad of Kentucky, to deliver 10 pallets of bottled water along with boxes of winter clothing and shoes to the survivors of the tornado.

According to Kentucky Gov. Andy Beshear, more than 70 people in his state, including six children, were killed and more than 100 remain unaccounted for as a result of the four tornados that pounded a swath of land some 200 miles wide. An estimated 30,000 people are without power, and more than 1,000 homes have been completely destroyed.

“Damage is in the hundreds of millions of dollars at least,” said Beshear. “There is not a lens big enough to capture the devastation. You stand in the middle of Mayfield or Dawson Springs, and it’s almost crushing how it feels.”

While there are some Jewish families near the affected areas—Rabbi Shlomo Litvin has reached out to those he knows—much of the Jewish communal life in Kentucky is centered in Louisville, about 200 miles from the hardest-hit areas. Despite the distance, Jewish organizations were quick to step up and help.

According to Stacy Gordon-Funk, senior vice president of philanthropy and chief development officer at the Jewish Federation of Louisville, as soon as they heard about the destruction, they got to work reaching out to the American Red Cross to see how they can be of help. The response led to the creation of a fundraising drive with 100 percent of the funds going to the Red Cross.

Gordon-Funk said the goal is to raise $50,000, and with donations pouring in from local families and Jews across the country, they are getting closer. The community leader praised the “level of kindness and generosity,” saying “our Jewish community knows how to mobilize and help so we have heard from a lot of people” who want to help.

Among them, she said, is a Jewish man from New York who called her offered housing to people who have lost their homes and a member of the local Louisville Jewish community who is mobilizing her friends and family in a grassroots effort to provide home-cooked meals for those in need in time for the upcoming Christmas holiday.

Also stepping up to help is the Israel Consulate in Atlanta, which arranged for the pallets of water the Litvins delivered on Monday. The donation is part of an initiative by Project Friendship, which normally provides clothing and shoes to people in need, but also steps up during disasters. According to Rabbi Shlomo Litvin, another truck full of supplies will be sent to the hardest region on Thursday. 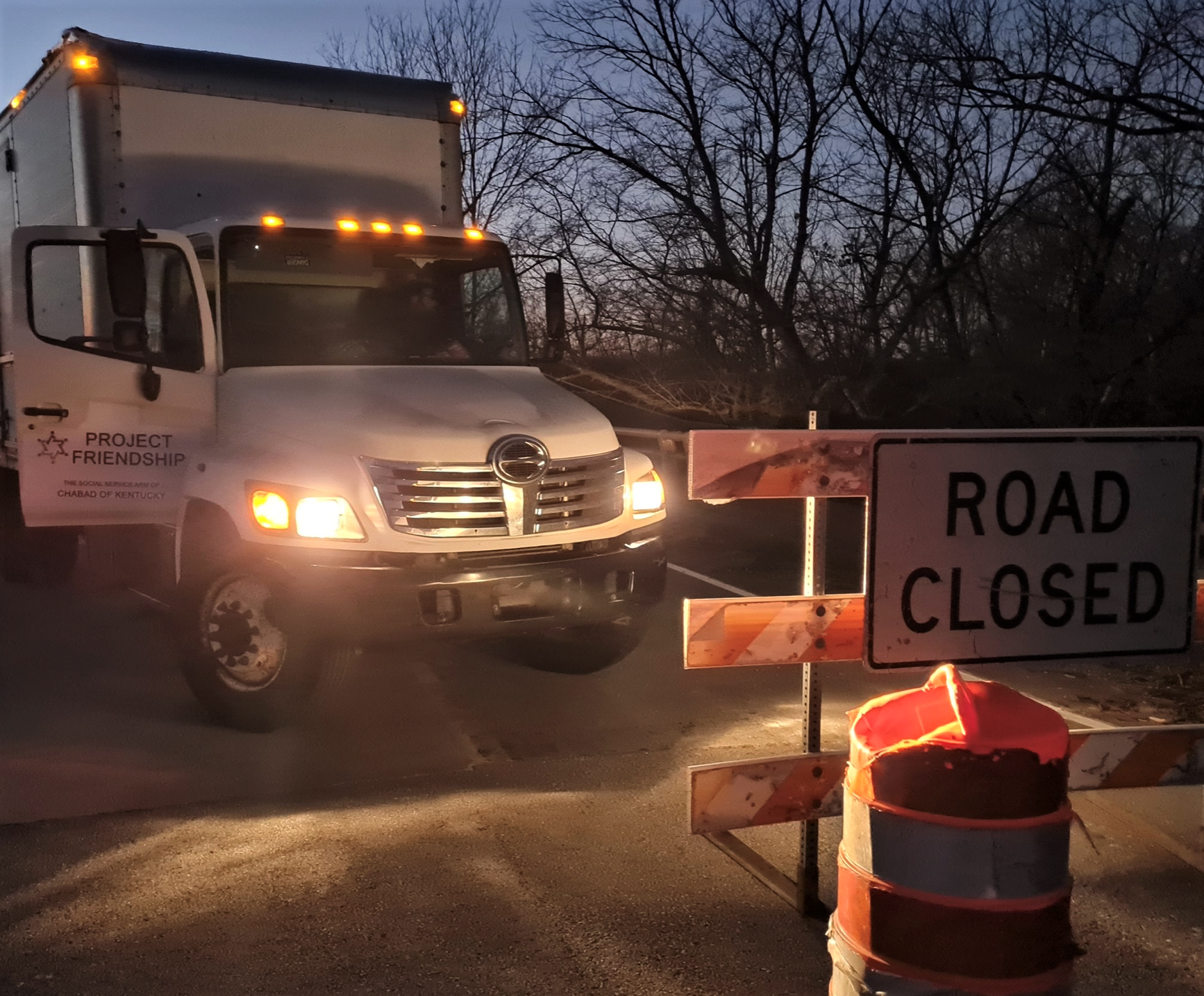 Those affiliated with Project Friendship, a social-service arm of Chabad of Kentucky, helped get staple items to those in need after a series of tornadoes decimated homes and other buildings in parts of the state, December 2021. Source: Rabbi Sholom Litvin/Twitter.

‘You could see the power of kindness’

But, he said, it isn’t just physical items that are needed.

“As much as material help is beneficial, being there and giving people someone to talk to is also helpful. I was on hand to help with Hurricane Harvey relief [which hit Texas and Louisiana in 2017], but when it’s your own community—a community that I visit regularly—it’s entirely different,” he told JNS after visiting devastated areas in the aftermath, including Dawson Springs, which lost 75 percent of its homes. “It’s a whole different world. I think our presence meant more than anything else.”

Litvin said he was inspired and “comforted” by how neighbors are helping neighbors.

“We would bring stuff to one person and they would say, ‘I’m sure there’s someone who needs it more than me,’ and we would ask them who; this enabled them to be part of the rescue effort,” he related. “Even as they were taking stock of their homes and everything they lost, they were saying their neighbor two doors down needs the water.”

Rabbi Yitzy Mandel, head of school at the Louisville Montessori Torah Academy, was among the many in Louisville who reached out the Litvins to see how he could help. The first thing he noticed was how quickly the Litvins had mobilized.

“[Rabbi Chaim Litvin] said what they needed most was water, so I got some water and went to drop it off at the warehouse he has for Project Friendship. It was full of clothing and supplies ready to go. I was amazed at the amount of things he was sending,” said Mandel, adding that at the warehouse, “you could see the power of kindness and what it can do.”

Also lending a hand will be the Israeli nongovernmental relief agency IsraAID, which is sending a disaster-relief team to the region. They will be working on the ground with Team Rubicon, an international disaster-response organization founded by U.S. military veterans, to provide whatever support they can. 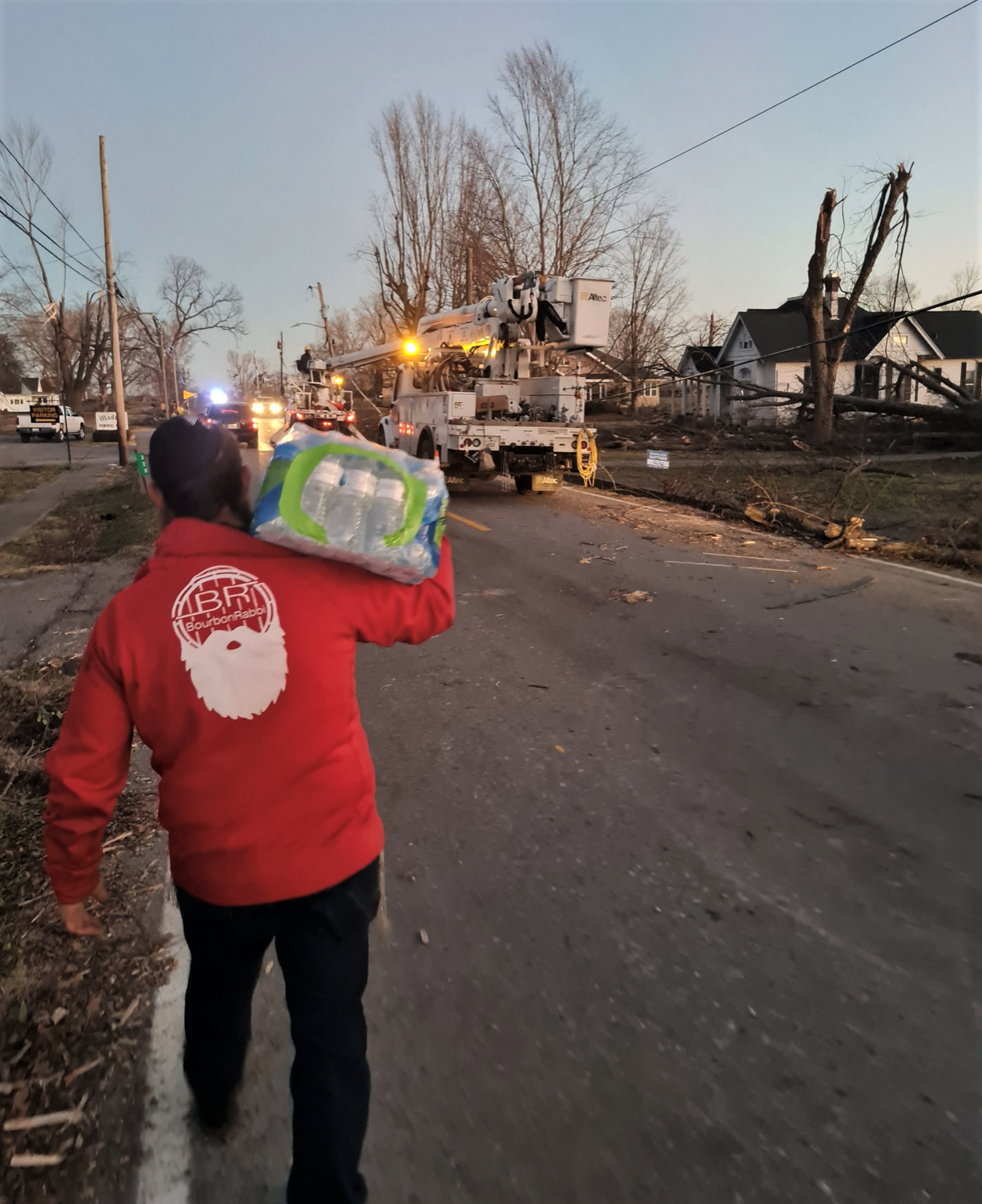 Helping deliver water to residents in one of Kentucky’s hard-hit areas after a series of tornadoes decimated homes and other buildings in parts of the state, December 2021. Source: Twitter.

Several Jewish-owned businesses from outside the region are also stepping up to help fellow business owners.

Mendel Mangel, who recently opened a fulfillment center in Cincinnati several hours away from the worst of the tornado damage, took to social media to get the word out about his offer: free warehouse space for businesses impacted by the tornado damage, particularly businesses who had “goods in transit and needed to be rerouted quickly, our warehouse could be a great location for that.”

“It’s always been ingrained in us to help others, and it’s something that I also try to pass to my employees. This provides a way for them to be involved and assist as well,” he said.

After seeing Mangel’s post, a Jewish business owner in New Jersey offered to help with shipping parcels and urged people to spread the word. “If you were affected, please reach out,” said Zevi Wolff. “If you weren’t, reach out to someone who was and let them know. This could save them 1000s of dollars. Have another service that may help? Post it in comments.”

Noting that his state has had to deal with several major disasters in recent years, including a historic ice storm and massive flooding, Beshear vowed in his press conference on Monday: “We will push through all of it because we don’t have a choice, and we are strong enough to do it.”