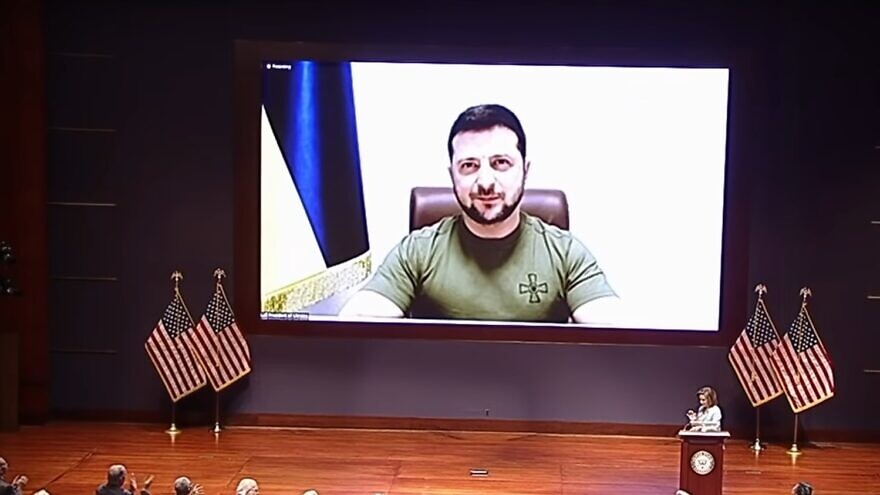 (March 17, 2022 / JNS) After Ukrainian President Volodymyr Zelensky spoke by video to a joint session of Congress on Wednesday morning, Jewish members were moved by Zelensky’s speech, though expressed slightly varied positions on what to do next.

During his address, Zelensky said that rather than having a dream like Martin Luther King, he had a “need,” imploring the United States to create a no-fly zone over Ukraine to level the playing field or deliver weapons and fighter aircraft for Ukrainians to secure their skies against the Russian military’s bombing campaign.

While no member of Congress called for a no-fly zone, their statements varied on how much emphasis was placed on providing Ukraine with air defense systems and other military hardware as opposed to diplomacy and further economic sanctions.

Feinstein said that Zelensky’s speech brought home the suffering of the Ukrainians from Russia’s aggression, saying that the United States must continue to provide for their defensive and humanitarian needs.

“I support President Zelenskyy’s requests for advanced defensive weaponry and believe the United States must continue to lead the way in bringing international diplomatic and economic pressure to bear on Russia to end this war,” Feinstein posted in a tweet. “This war has killed thousands and more than 3 million Ukrainians have already fled their country. We must do all we can to end the suffering and make sure [Russian President] Vladimir Putin understands this is not a war he can win.”

Blumenthal tweeted twice about the speech, which he called “impassioned and impactful,” and argued that the Ukrainians should be provided with the defense capabilities to give itself protection against Russian attacks from the sky.

Zelensky was greeted as a hero during his speech and given multiple standing ovations by the bipartisan audience. House Speaker Nancy Pelosi let the members in a chanting “Slava Ukraini,” or “Glory to Ukraine” while Zelensky watched on, his face projected onto a large screen behind her.

Rep. Jake Auchincloss (D-Mass.) said in a televised interview that the speech is going to be “one of the memories from my political career that I hold closest.”

“It was a battle cry from the frontlines of the free world. And President Zelensky reinforced the moral clarity and urgency of the moment, and he also made specific, actionable requests of Congress, which we do need to follow through on,” Auchincloss said. “In particular providing an air [defense] system that closes the skies and allows the Ukrainian ground forces to get into a fair fight with the Russian ground forces that they’re going to win.”

In the same interview, Auchincloss attacked Republicans who are criticizing U.S. President Joe Biden’s administration for not doing enough to help the crisis.

“I didn’t hear any of this tough talk when [former President Donald] Trump was blackmailing the Ukrainian president in a dirt-for-arms deal that led to his impeachment, and second of all, they’re offering criticisms without … solutions,” Auchincloss said.

But Auchincloss specifically differentiated closing the skies over Ukraine, which can be done by providing Ukrainian forces with air defense systems, against creating a no-fly zone, which would require the United States to engage Russian warplanes directly if the no-fly zone is breached and potentially plunge two nuclear powers into war.

“It is clear that we need to close the skies. We are providing the material and the money necessary to do that,” he said. “But both parties agree that [a] no-fly-zone, which is a declaration of war, that would be an unnecessary and deeply destabilizing escalation.”

Rep. Josh Gottheimer (D-N.J.) called for both sides of the aisle to come together and give Ukraine what it needs to defend itself and called Russian President Vladimir Putin a murderous dictator. He added that the United States should do everything it can to stop the war.

“Putin has terrorized countless innocent Ukrainian families and children, blocked humanitarian aid, and violated multiple ceasefires,” Gottheimer wrote in a tweet. “In times of great distress, when innocent lives and our allies are being attacked, we have always done best when we’ve stood together, unified. We must continue to show a unified NATO response to Russia’s invasion.”

‘Help de-escalate this conflict as soon as possible’

Other members who spoke out were focused less on the military aspects of supporting Ukraine and instead called for more or continued economic pressure to be applied to Russia.

“My position remains that the United States must use all diplomatic, informational and economic instruments of national power at our disposal to support Ukraine and deter Russia’s aggression. The purpose and goal must be to help de-escalate this conflict as soon as possible,” Rep. Lee Zeldin (R-N.Y.) said in a news release, adding that Zelensky’s stand against Putin’s invasion was inspiring and remarkable.

Rep. Brad Schneider (D-Ill.) in a news release, highlighted what Congress had already done to support Ukraine economically and militarily, passing $13.6 billion for humanitarian, military and economic support for Ukraine, as well as banning imports of Russian oil and creating legislation to revoke Russia’s permanent normal trade relations with the United States.

He also said that the House Foreign Relations Committee, of which he is a member, is investigating the invasion for war crimes.

“We must lead, and we must join with our allies to stand with Ukraine and ensure Putin loses,” Schneider said. “Peace depends on us.”

Rep. Debbie Wasserman Schultz (D-Fla.) urged the government to further isolate Putin and his oligarchs, urging American companies to divest from Russia to devastate it financially, politically and militarily. She also called on Florida to divest itself of $300 million in state pension assets in Russian companies, while attacking her state’s Republican governor.

“Gov. Ron DeSantis—who parrots autocrats by demonizing the media, immigrants, protests and democratic voting rights—must act,” she said in a statement. “Any moral abdication sends a chilling message to brave freedom fighters in Venezuela and Cuba, where Putin already funds dictators and oppression. Russia must be punished, not coddled. The people of Ukraine, and every democracy on the planet, are counting on America to make that happen.”