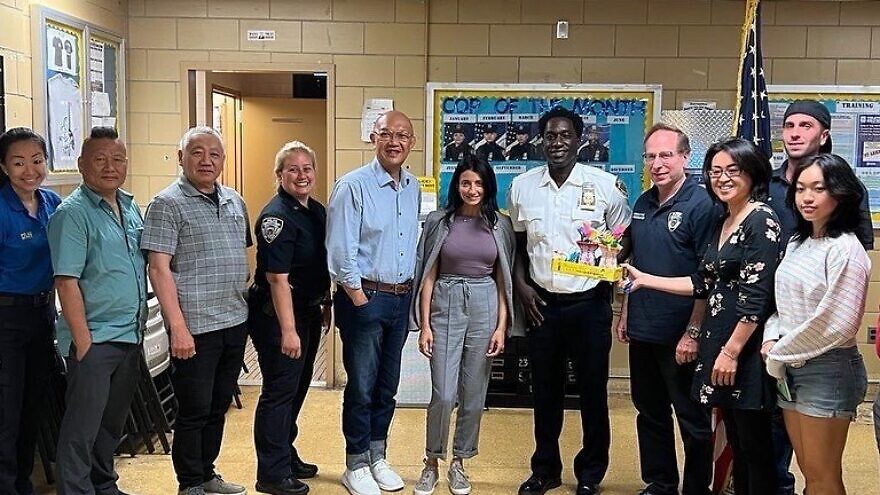 Through an initiative led by New York City Republican Councilwoman Inna Vernikov, members of Flatbush Shomrim (Hebrew for “watchers”) in Brooklyn, N.Y., are training volunteers from an Asian neighborhood in Vernikov’s district on how to run a successful community safety patrol. Flatbush Shomrim executive coordinator Bob Moskovitz told JNS that his organization, which was formed three decades ago, is trying to serve as a guide and mentor for its Asian neighbors.

“These are community members who mostly have no clue exactly what it is that they’re doing regarding starting and running an effective safety patrol,” said Moskovitz, highlighting the notable exception of retired NYPD Deputy Chief Dewey Fong.

Moskovitz said the Asian Community Watch consists of around a half-dozen people. In two meetings so far, Shomrim has tried to help them lay the groundwork, discussing operations, strategies, funding and other issues that are involved in creating a new patrol.

“I explained to them the whole nine yards. Who they have to recruit, what they should be looking for, who they want to represent an organization,” he said. “We had a meeting with the police precinct commanding officer, and he is on board with the whole thing because it’s obviously a necessity. This is a process. I can’t impart the experience of 31 years in a couple of hours or even a couple of months; we’re starting slowly.”

There have been 51 confirmed hate crimes against Asians in New York City this year, as of the end of June, according to the NYPD Hate Crimes Dashboard.

Fong told JNS that the Shomrim has been helpful so far in imparting their experience patrolling their largely Jewish neighborhood in Brooklyn.

“The Shomrim invited us for a ride-along with their patrol, so we could see firsthand how they operate. They opened their knowledge to us, and we will take our lead from them,” he said.

Among the early keys to a successful neighborhood patrol, according to Moskovitz, are having a reliable number of volunteers and an effective way to communicate instantly when something happens, whether that’s via cell phones or the $1,000 two-way radios that the Shomrim utilize.

“There are cell-phone apps they can use. Communication, of course, is critical, both with each other and with the police department. You have to know how to put over a call, and you have to have the right connections,” said Moskovitz.

One of the concrete suggestions Shomrim has advised the Asian watch group to do is to make contact with store owners in their neighborhood to ensure that they have functioning surveillance cameras. That way, in the event of an incident, there is security footage that can help them know who to watch out for and help police track down the perpetrator.

“You can’t be all over the [neighborhood] right away to start. We figured that their commercial strip is a good place to begin,” said Moskovitz, who emphasized that ultimately, the success of the watch group will depend on the level of engagement and commitment from community members.

Shomrim of Flatbush—there are other Shomrim groups across Brooklyn and in other areas with large haredi and Chassidic populations—instituted a similar training program for an African-American neighborhood in East New York around 12 years ago, but, according to Moskovitz, that neighborhood watch group never took off.

“This is not a part-time type of thing, where everyone gives an hour a week. If you want to be active out there, catching the bad guys, it’s a major commitment,” he said. “That’s going to be their business, but we’re going to train them as best as we can, and any questions that they have, we will be there to answer.”