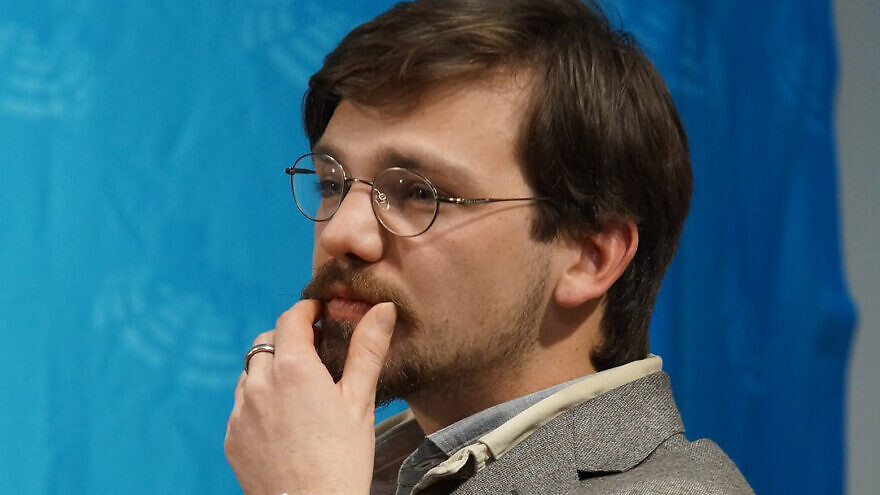 (November 11, 2022 / JNS) In October 2018, around two dozen Jews met in a nondescript conference hall in Wiesbaden, outnumbered by reporters, to inaugurate the Jewish faction of the right-wing Alternative for Deutschland party (JAfD). Going against the condemnation of an alliance of established German-Jewish groups who castigated the AfD as racist towards Jews and Muslims alike, these right-wing Jews argued that the party was “kosher” and could serve as a protector of German Jews given its leaders’ pro-Israel, anti-Muslim immigration positions.

Four years later, some pro-AfD Jews are experiencing buyer’s remorse. They had pinned their hopes on the moderate flank consisting of old-school conservatives who had been disillusioned by former Chancellor Angela Merkel’s leftward turn on immigration, energy and Israel but who were recently overrun by a pro-Russian wing known to be apathetic towards anti-Semitism and Israel, at best.“Within the party, the more radical and anti-Western people are succeeding in getting the majority,” said JAfD (Juden in der AfD, or Jews in the AfD) co-chair Artur Abramovych, also a research associate for an AfD parliamentarian.

Abramovych attributed this evolution in part to a smear campaign by the government, rendering the AfD too toxic for an educated, classically conservative electorate.

In March of this year, the Administrative Court of Cologne ruled that the Federal Office for the Protection of the Constitution, Germany’s domestic intelligence agency, had the right to surveil the populist party for extremism. At its peak, the JAfD branch had 24 members; it has dwindled to 19 with talk of disbanding.

The major turning point came at the outbreak of the Russia-Ukraine war when AfD co-chair Tino Chrupalla gave what analysts characterized as an incoherent, pro-Russia speech at a special parliamentary session. Hand in hand with this shift, some have vocally pivoted towards Iran, casting doubt on the party’s opposition to radical Islam.

A Ukrainian-born Jew, Abramovych adamantly sides with Ukraine, as, he said, do most Russian-speaking German Jews who had become disillusioned with Vladimir Putin’s violent onslaught.

Abramovych said there are two other approaches to Russia within the party. “Then there’s one-third of the party that simply says German interests are so much connected with Russia that we shouldn’t participate in sanctions….A third is for Ukraine. They believe in the self-determination of peoples and that’s why they accept the Ukrainian decision of going to the West.”

Incidentally, the pro-Kyiv faction tends to be pro-Israel, with some exceptions such as pro-Ukraine Bundestag deputy Roger Beckamp, chair of the German-Iranian parliamentary group, who tweeted on August 24: “The Iran nuclear agreement is within grasp, and with it, more security and prosperity for the entire region, also to Germany’s benefit. I just hope the Saudis & Israel don’t flare up again.”

Then, vindicating AfD critics who charge the party with anti-Semitism, an AfD official from the federal state of Thuringia danced on a slab of the Berlin Holocaust memorial, a memorial which the controversial Thuringia AfD chief Bjorn Höcke infamously called a “Monument of Shame.”

Israel-born Simone Schermann, a pro-Israel activist based in Freiburg, had been on the JAfD board for a short period since its inauguration in Wiesbaden.

“I hoped back then the AfD had a Christian-Judeo picture,” said Schermann. “This is what some people spoke about. I remember [AfD co-chair] Alice Weidel speaking about how important Judaism was to Germany, how it had great thinkers. I miss this.”

In recent months, she’s noticed an upswing in anti-Semitic sentiment in right-wing German chats and groups she follows. Until then, she said, the frequency of anti-Semitic expressions had been in line with that found in every German political mileu, from right to left.

This fatal split within the party was evident early on to some well-known conservatives, including columnist David Goldman, who authored an article in Tablet taking issue with its characterization as a “Nazi” party while saying he could not lend support to an organization that “tolerates louts like [former co-chair] Alexander Gauland, who minimize the singular evil of the Nazi extermination campaign.”

“I’ve never thought the AfD was a Judeo-Christian party,” Goldman told JNS. “It’s a melange of different elements with different agendas.” Nor does he view the AfD as a decidedly pro-Putin party, either.

“There’s a difference between embracing Putin (which Alexander Gauland has throughout) and supporting a negotiated solution in Ukraine, which I think is a reasonable position.”

The JAfD was founded on the premise that it could lobby the party on issues of Jewish interest from within, such as its position of banning ritual slaughter—a policy targeted against Muslims that, Abramovych, said, hardly affects Jews since kosher meat is largely imported. Abramovych is no longer optimistic that the leadership is in place to usher in a bonafide pro-Jewish position.

“Back then, I was able to call almost everyone whenever I wanted on the board,” Abramovych said. “I knew these people personally. Now, on the new board which is elected, there are three out of 13 people left with whom I used to talk to nightly.”

Still, neither Schermann nor Abramovych regrets their decision to give the AfD a chance.

“There are still good people in that party and I’m biased in favor of them,” Abramovych said. “They’re also suffering over what happened to the party. The party is not a single person. If a single person lies to you or doesn’t do what you hope for, then you can be biased. But a party consists of many different people, and it doesn’t change from one day to another.”

“I still don’t want to bash the AfD for a few reasons, because enough people are bashing them,” Schermann said. “And they’re doing a lot of things wrong, but the other parties also do things wrong.”