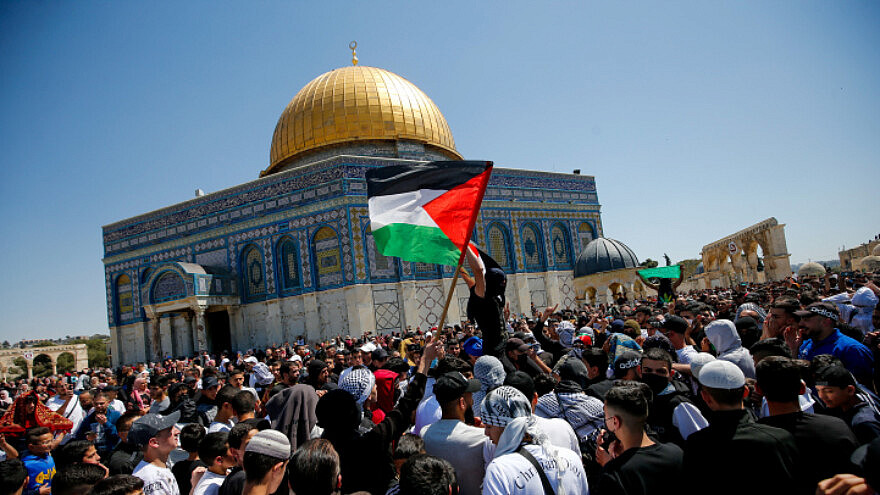 Palestinians protest on the holy month of Ramadan at the Al-Aqsa mosque compound on the Temple Mount in Jerusalem on April 15, 2022. Photo by Jamal Awad/Flash90.
Republish this article
357 WORDS
Spread the word.
Help JNS grow!
Share now:

(May 12, 2022 / Israel Hayom) Jordanian Foreign Minister Ayman Safadi said earlier this week that “Israel has no sovereignty over the holy sites in Jerusalem.”

“Israel has no sovereignty over the Al-Aqsa mosque. It is a Muslim place of worship, only the Jordanian Waqf has full authority over the management of the compound,” argued the minister. “This is occupied Palestinian land.”

Safadi, however, expressed hope for a return to calm, saying “the way forward is to respect the status quo.”

He accused the Jewish state of “making difficult all Waqf measures to maintain security in Al-Aqsa mosque and interfering with the duties of members of the organization. The Waqf office has appointed dozens of new workers at the Al-Aqsa mosque compound, but Israel is putting obstacles in their way.”

As part of its peace treaty with Israel after the Six-Day War in 1967, Jordan was afforded control of the Islamic Waqf—an Islamic religious trust best known for controlling and managing the Islamic edifices on and around the Temple Mount in the Old City of Jerusalem, including the Al-Aqsa mosque and the Dome of the Rock.

About six weeks ago, a request from Jordan for Israel to increase the number of Waqf guards on the Temple Mount by about 50 was rejected, the Prime Minister’s Office announced on Tuesday.

It has also been reported that over the past few weeks, six Hamas-backed Waqf guards were removed from the Temple Mount.

“There is no change or new development in the situation on the Temple Mount; Israel’s sovereignty is preserved,” said the Prime Minister’s Office. “All decisions regarding the Temple Mount will be made by the Israeli government out of considerations of sovereignty, freedom of religion and security, and not under the pressure of foreign or political factors, it said.

The Jordanian minister made the remarks in advance of a meeting on Friday between King Abdullah and U.S. President Joe Biden at the White House, where the issue of Jerusalem is expected to be one of the main topics of the meeting.

i24NEWS contributed to this report. This is an edited version of an article that first appeared in Israel Hayom.